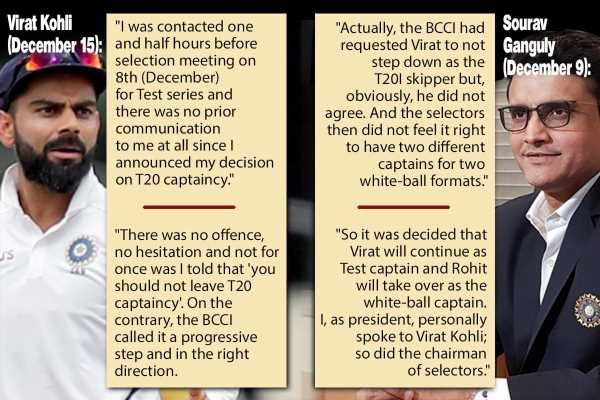 India Captain Virat Kohli opened a can of worms as he took BCCI President and former skipper Sourav Ganguly head on about claims that the Board had asked him not to quit as the T20I captain.

‘Whatever was said about the communication that happened about the decision that was made was inaccurate,’ Kohli said with obvious reference to Ganguly’s statement that the Board requested him not to quit T20 captaincy as split captaincy might not work in the white-ball format.

‘Actually, the BCCI had requested Virat to not step down as the T20I skipper but, obviously, he did not agree. And the selectors then did not feel it right to have two different captains for two white-ball formats,’ Ganguly had said on December 9.

“‘So it was decided that Virat will continue as Test captain and Rohit will take over as the white-ball captain. I, as President, personally spoke to Virat Kohli; so did the chairman of selectors,’ Ganguly added.

But Kohli denied his claims in an explosive press conference ahead of the Indian team’s departure for South Africa.

‘The chief selector (Chetan Sharma) discussed with me the Test team to which we both agreed and before ending the call I was told that the five selectors have decided that I will not be the ODI captain, to which I replied ‘okay, fine’. And in the selection call afterwards I chatted about it briefly and that’s what happened. There was no communication before that at all.’

Contrary to Ganguly’s claims, Kohli revealed that he was never told to continue as India’s T20 captain.

Kohli also stated that he made it amply clear to the Board that he wanted to continue as captain in ODIs and Tests.

‘At that point I had communicated that I wanted to continue as the captain in the ODIs and Tests unless the selectors and office-bearers feel that I should not continue with the responsibility, so all this was clarified in that call.’

‘So my communication with BCCI was very clear about what I wanted to do and as I said I had given an option that if the selectors and office-bearers feel I should not be the captain, then the decision is up to them.’