Rajasthan Royals defended 176 against the Lucknow Super Giants at the Brabourne stadium in Mumbai on Sunday evening in a strategy all too familiar in the IPL this season — batting first, stifling their opponents for twenty overs, making critical breakthroughs at opportune moments and systematically sending the required run rate through the roof with wave after wave of disciplined bowling.

Royals Captain Sanju Samson was quick to opt for batting on winning the toss and as the LSG chase broke down in the second half of the encounter, there was one man who kept his side in the contest before his eventual downfall led to his team capitulating in the death overs.

Deepak Hooda kept his composure notwithstanding the mounting pressure, ensured the runs kept coming despite wickets falling around him and eventually top scored with 59 off 39 deliveries. His innings stretched from the third over all the way up to the 16th and included 5 fours and 2 sixes.

Hooda’s entry to the pitch followed Ayush Badoni’s departure for a golden duck and with the LSG score at 21-2 after two overs.

Alongside K L Rahul, Hooda attempted to rebuild the LSG innings, but the skipper fell prey to Prasidh Krishna in the sixth over. Hooda and Krunal Pandya then formed a 65 run partnership off 46 balls, which seemed game-changing at one stage. 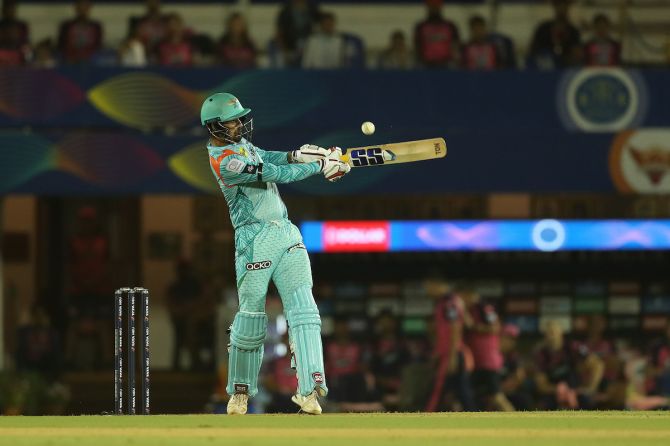 Krunal was dismissed early in the 14th over trying to go after Prasidh with a flighted shot to long off that resulted in a spectacular two-man catch at the boundary involving Jos Buttler and Riyan Parag.

Hooda marched on valiantly, hitting fours off Trent Boult and Yuzvendra Chahal from successive overs before his eventual fall in the 16th over.

With 63 runs needed off 25 balls, the metaphoric noose of the mounting run rate kept tightening around his neck as Hooda attempted a pre-meditated shot against Chahal. He came down the track with a great swing of his bat, only to edge the ball back to ‘keeper Samson.

With Hooda stranded yards outside the crease, Samson took two attempts — one to flick the bails and the other to uproot the stumps for good measure — to register the stumping and see off Hooda.

Any semblance of an LSG revival quickly evaporated as two wickets fell in the very next over bowled by Obed McCoy as the Royals took control of the tie.