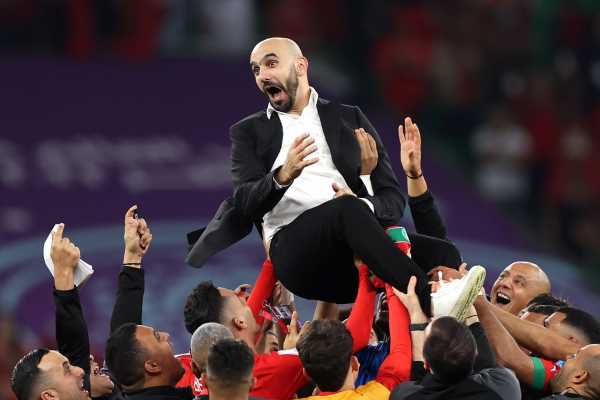 Morocco coach Walid Regragui pulled off a classic smash-and-grab to claim his third major European scalp of the World Cup with a tactical masterclass that sent the Atlas Lions into their first-ever semi-final with a gritty 1-0 win over Portugal on Saturday.

Youssef En-Nesyri’s towering header near the end of the first half proved the difference as Regragui’s men added victory over Portugal to their earlier wins over Belgium and Spain and set up a last-four clash with England or France.

On the evidence of this match, neither of those heavyweights will be thrilled at the prospect of facing Morocco, who turned in a performance that was equal parts streetwise and full of heart to end Cristiano Ronaldo’s journey in Qatar and send him away in tears.

There was shock, disbelief, more tears and also complaints from the vanquished Portuguese but their defender Pepe perhaps summed it up best.

“We conceded a goal that we didn’t expect,” he said. “(And)they didn’t let us play in the second half.”

Morocco’s progress at the World Cup has been built on fearless, no-nonsense defending and they came into the match with the best defensive record, having conceded only once – an own goal against Canada in a group stage game that they still won 2-1.

Up against a Portugal side that were the tournament’s joint top-scorers with 12 goals, it was always going to take something special for Morocco to progress, and that is precisely what they delivered.

Regragui lost first choice centre back Nayef Aguerd before the match but replacement Jawad El Yamiq was immense alongside skipper Romain Saiss, snapping into tackles and making last-ditch blocks as Portugal attacked in waves only to be stymied at every turn.

Saiss put his body on the line to keep his team in the match and was carried off on a stretcher in the 57th minute, while Morocco were also heavily indebted to midfield enforcer Sofyan Amrabat for protecting their advantage.

At the other end of the pitch, winger Hakim Ziyech and full-back Yahya Attiat-Allah provided the creative outlets, tearing up the flanks to relieve the near-constant Portuguese pressure. 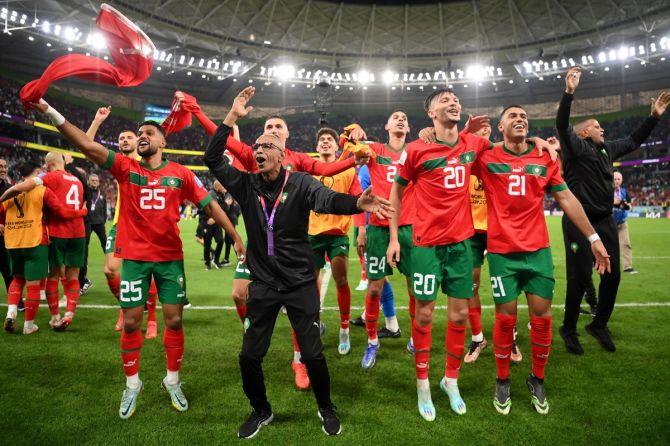 The victory makes Morocco the first African or Arab country to reach the final four of soccer’s global showpiece and was wildly celebrated across the region and further afield.

The sea of Moroccan fans who showed up to cheer their team turned the Al Thumama Stadium into a seething cauldron of noise as Portugal’s forwards wilted under the waves of hostility pouring down from the stands.

As the game ebbed and flowed, every Portuguese touch was met with a wall of whistles and jeers from a partisan crowd that for once did not make FIFA’s attendance figures of 44,198 seem like a stretch.

“It was like we played at home, thank you for all the people,” Amrabat said.

With Cristiano Ronaldo benched for the second game in a row, Portugal coach Fernando Santos once again turned to Goncalo Ramos to lead his attack.

The 21-year-old’s lightning hat-trick against Switzerland had helped them reach the quarter-finals with a massive 6-1 win. But the fluid Portuguese moves that sliced through the Swiss defence were snuffed out by Morocco’s fearless defending.

Regragui’s team played with all 11 men in their own half without the ball in a classic low block, soaking up pressure like a sponge before uncoiling on the counter-attack to deadly effect – one more tactic they can take with them into the World Cup semi-final, the biggest game they have ever played.