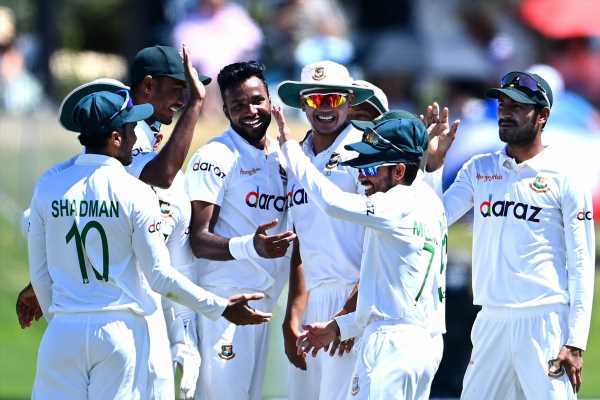 ‘I can’t describe it, it’s unbelievable. I couldn’t sleep yesterday because of the pressure’ 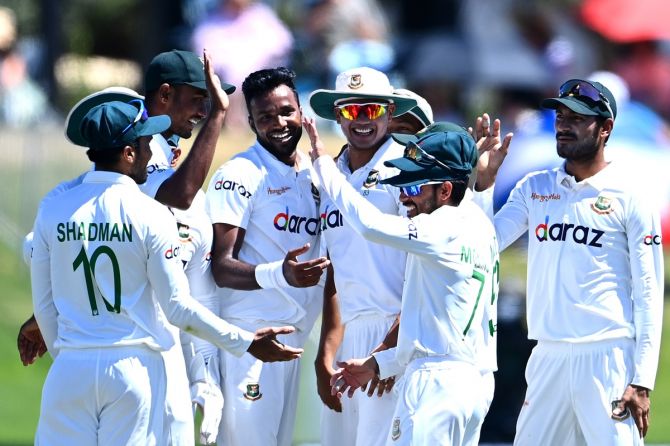 Mominul Haque hailed Bangladesh’s ‘unbelievable’ win over New Zealand on Wednesday after they beat the world Test champions by eight wickets to end the ‘Black Caps’ run of 17 matches without defeat on home soil.

Seamer Ebadot Hossain took a career best 6-46 as the tourists dismissed New Zealand for 169 early on day five at Mount Maunganui and then knocked off the 40 runs for victory for the loss of two wickets.

It was Bangladesh’s first win in any format of the game in New Zealand and gave them a 1-0 lead in the two-match series.

“I can’t describe it, it’s unbelievable. I couldn’t sleep yesterday because of the pressure,” skipper Mominul told reporters.

“It was very important to win this Test match. Two years ago, we didn’t play that much Test cricket, so we were keen to improve.”

“I think it was a team performance, we did very in all three departments. Our bowlers used the moisture really well, and the batters did really well too. I said previously that we need to win these test matches for our legacy.”

Bangladesh had gone into the match focusing on the process rather than the result, he added.

“You have to have a clear mindset, before playing anywhere. If you’re going out of the subcontinent, and you think to yourself that ‘it will be tough,’ then it will be tough,” said Mominul.

“We didn’t focus too much on the result of the Test matches, we tried to focus on the process.”

The Bangladesh captain also praised the performance of Ebadot, saying he had worked really well over the last two or three years.

“He has come from the Air Force and used to be a volleyball player,” Mominul added. “Our coaching staff did a lot of work to support him and helped him bowl in the right areas, and it was an unbelievable spell from him.”

The second Test of the series will be played at the Hagley Oval in Christchurch from Jan. 9-13.