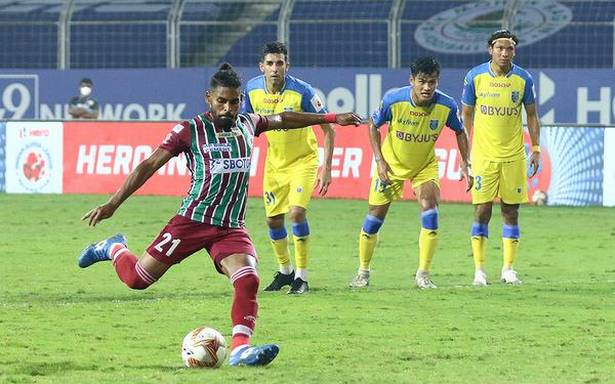 When ATK Mohun Bagan (ATKMB) and Kerala Blasters set the ball rolling in the opening match of the Indian Super League 2021-22 on Friday, it will mark the second straight year the nation’s premier football competition will embrace the safety of a bio-secure bubble.

Even as the second wave of the COVID-19 pandemic is on the wane, the sheer size of the competition — four months, 11 teams and 115 matches — means that it cannot envisage a caravan-like existence across the length and breadth of the country, but again nestle in the comfort of the quaint little coastal state of Goa.

Nonetheless, there isn’t as much chaos, with travel restrictions, visa troubles, last-minute entry of teams and eleventh hour player signings mostly things of the past. Even the managerial upheaval, a trademark of Indian football, has reduced, with six of the 11 teams appointing new coaches as against nine of 11 last season.

Instead, all the focus will be on matters on-field, with ISL aligning itself closer to the Asian Football Confederation (AFC) mandated ‘four overseas players per eleven’ rule, but without the compulsory presence of an AFC-region player.

This means there will be one less foreigner on the pitch, raising the stakes, and with that the opportunities, for a raft of Indian players to leave their imprint. But sides that have built their success around a spine of stars from abroad will have their thinking caps on.

Defending champion Mumbai City FC and runner-up ATKMB will want to be the first teams to crack this code and find the right balance. Mumbai has a new coach in 36-year-old Des Buckingham, who replaces Sergio Lobera.

ATKMB’s Antonio Habas, on the other hand, will be eager to avenge last campaign’s twin reverse, when Mumbai edged his team both to the League shield and the ISL trophy.

FC Goa, the League’s most consistent side, and the fledgling Hyderabad FC seem set to close the gap and not allow the competition to become a two-horse race once again.

Juan Ferrando-coached Goa is well-rounded, has valuable experience of playing in the AFC Champions League and recently won the Durand Cup, raising hopes of a maiden ISL title.

Manuel Marquez’s Hyderabad played attractive football in the previous campaign and if the side’s strong Indian core can come good again, it can go places.

The League will have its first-ever full-time Indian coach in NorthEast United FC’s Khalid Jamil, who catapulted the side into the top-four after taking over as interim coach midway last season.

Hoping for a turnaround

Sunil Chhetri-led Bengaluru FC will hope for a turnaround under new coach Marco Pezzaiuoli after previous year’s dismal returns, while two-time champion Chennaiyin FC, not as ineffective despite finishing a position lower in eighth, will hope for a better future under Bozidar Bandovic.

Owen Coyle’s Jamshedpur FC blew hot and cold, but seems to have the personnel to better the sixth-place performance from 2020-21. Odisha FC and Kerala Blasters, constantly in churn, will be desperate for some smooth sailing.

Kolkata giant SC East Bengal will look to turn over a new leaf after 12 shambolic months. It finished ninth and until recently, its very future in the ISL was up in the air because of ownership wrangles. A club with more than a century’s history, and a League banking on that very club’s legacy to enlarge its footprint, can ill-afford a repeat act.