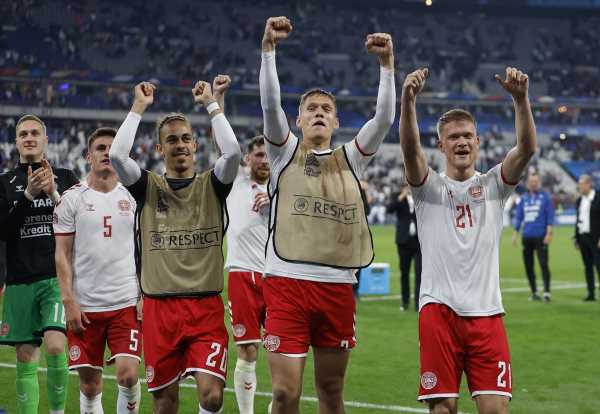 A round-up of Friday’s action in the UEFA Nations League.

Andreas Cornelius came off the bench to fire two goals for Denmark as they came from behind to defeat France 2-1 in their Nations League Group A1 clash at the Stade de France on Friday.

Karim Benzema, who lifted the Champions League trophy with Real Madrid at the same venue last Saturday, looked like he was headed for another stellar night as he had an early shot smothered and then a goal ruled out for offside.

His strike partner Kylian Mbappe departed at halftime after picking up an injury but Benzema was undeterred, cutting in from the right and playing a one-two with Christopher Nkunku before dribbling past another couple of Danish defenders and firing home in the 51st minute.

The world champions had Denmark under enormous pressure for most of the second half but they levelled through substitute Cornelius when he deftly volleyed home a pass from Pierre Hojbjerg in the 68th minute. The goal did little to stop the relentless waves of French attacks and Ngolo Kante should have put the home side back into the lead in the 81st minute, but his curling shot smacked off the right-hand post with Kasper Schmeichel stranded.

Denmark remained a danger on the break, with playmaker Christian Eriksen somehow firing his shot straight at Hugo Lloris with the goal at his mercy in the 86th minute, but Cornelius came to the rescue two minutes later.

The 29-year-old beat the off-side trap to latch on to Joakim Maehle’s long pass and blasted the ball high into the net past Lloris for the winner.

France travel to Croatia for their next game on Monday, while the Danes face another away game against group leaders Austria, who beat the Croatians 3-0 in their opener. 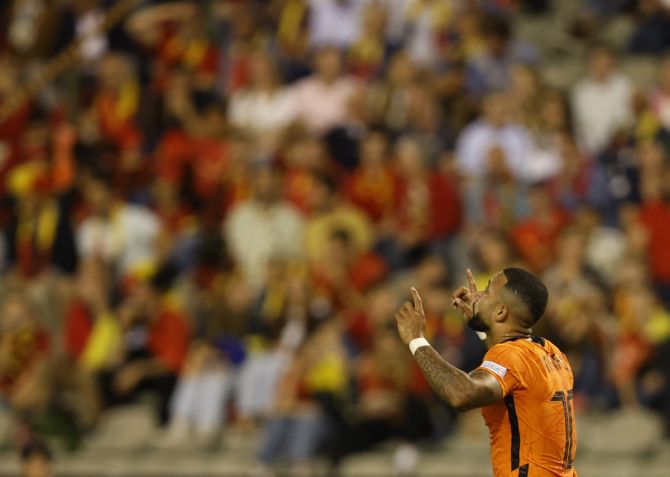 Memphis Depay scored a double as the Netherlands ended 25 years without success against neighbours Belgium with a 4-1 thumping of their hosts in the Nations League in Brussels on Friday.

Steven Bergwijn and Denzel Dumfries netted the other two goals as the Dutch ended Belgium’s almost six-year unbeaten home record in a stark reversal for the team, who had topped the FIFA rankings for three years until being recently deposed.

Bergwijn hammered home from outside the box in the 40th minute to give the Dutch a deserved halftime lead before Depay and Dumfries added more in the second half in a decisive performance.

Belgium, who lost Romelu Lukaku to injury early on, scored a consolation three minutes into stoppage time through Michy Batshuayi but were badly exposed at the back and the result will come as a serious setback as the prepare for the World Cup later this year. 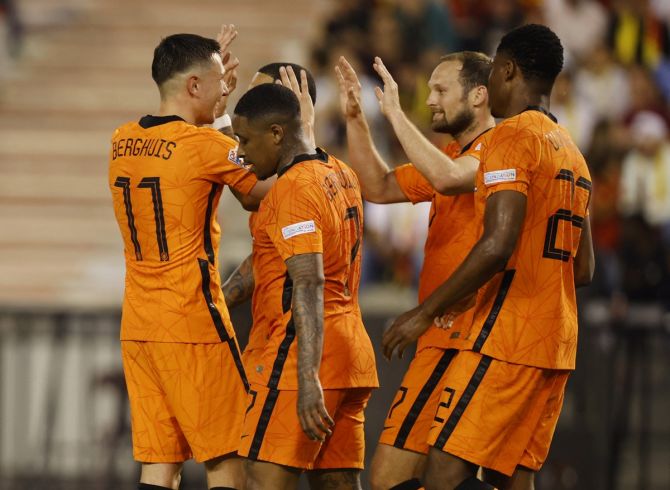 The Dutch, who last beat Belgium in 1997 and had gone eight derbies without success since, ripped apart the home defence in the second half as Depay added the second in the 51st minute on a counter attack after a midfield steal from Davy Klaassen and a quick pass down the middle from Steven Berghuis.

Fullback Daley Blind reacted quickest to a rebound off a save from a Berghuis shot 11 minutes later to set up the third goal with a pass across the face of the goal that Dumfries tucked in at the back post.

Blind then provided another assist three minutes after that with a header into the path of Depay, who skilfully took the ball down off with his thigh before thumping it past Simon Mignolet from close range. 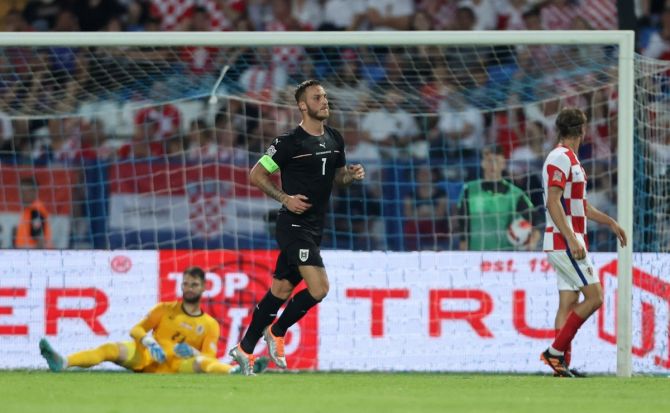 Ralf Rangnick’s tenure as Austria’s new coach got off to a perfect start when they beat Croatia 3-0 in their opening game of the new Nations League campaign on Friday.

Goals from Marko Arnautovic, Michael Gregoritsch and Marcel Sabitzer helped Austria move to the top of the League A Group One after Denmark claimed an away 2-1 victory against France in the other game.

Austria took the lead against the run of play just before halftime when Arnautovic made a solo run past the defence and took a shot from the edge of the box into the bottom right corner.

Substitute Gregoritsch doubled Austria’s lead in the 54th minute on the counter attack with a fine first-touch strike, while Sabitzer made it 3-0 three minutes later.

Austria — who missed out on World Cup qualification — were without David Alaba, who did not travel with the squad after winning the Champions League with Real Madrid last week.