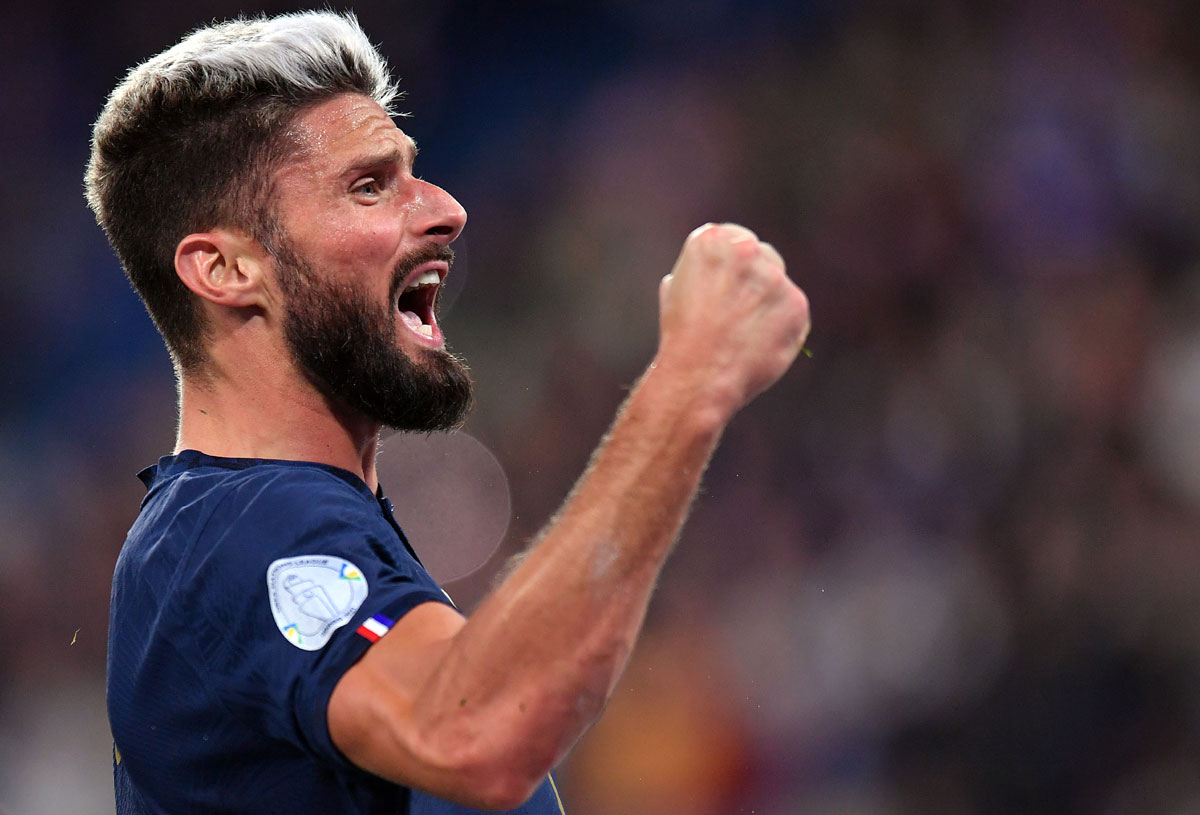 Olivier Giroud became the oldest player to score a goal for France, while Kevin De Bruyne’s brilliance helped Belgium beat Wales 2-1. The Netherlands are within one point of securing a place in next year’s four-team Nations League finals after an easy 2-0 win against Poland. Images from the Nations League football matches played on Thursday.

France kept their hopes of staying in the top tier of the Nations League alive as goals by Kylian Mbappe and Olivier Giroud secured a 2-0 home victory over Austria on Thursday.

Mbappe produced a stunning strike before the 35-year-old Giroud sealed the win with a header to become the oldest player to score a goal for France.

The world champions, who travel to Denmark on Sunday, climbed to third in Group 1 with five points from as many games.

Victory came at a price, however, as defender Jules Kounde and goalkeeper Mike Maignan sustained injuries, and may join Karim Benzema, Hugo Lloris and Paul Pogba on the sidelines.

France coach Didier Deschamps was satisfied with the performance in front of an unusually enthusiastic crowd.

“We did what we had to do,” the 1998 world champion said. “Our intentions were good, everyone defended a lot, there are a lot of positives. The mindset was good, it was a very good performance.”

The hosts, who had lost two and drawn two of their four previous games, came out with all guns blazing at the Stade de France.

Mbappe fired a shot into the top corner in the second minute but the effort was disallowed for offside.

Aurelien Tchouameni’s attempt from just outside the box after a quick combination between Antoine Griezmann and Mbappe was tipped over by Austria keeper Patrick Pentz as Les Bleus piled on the pressure. 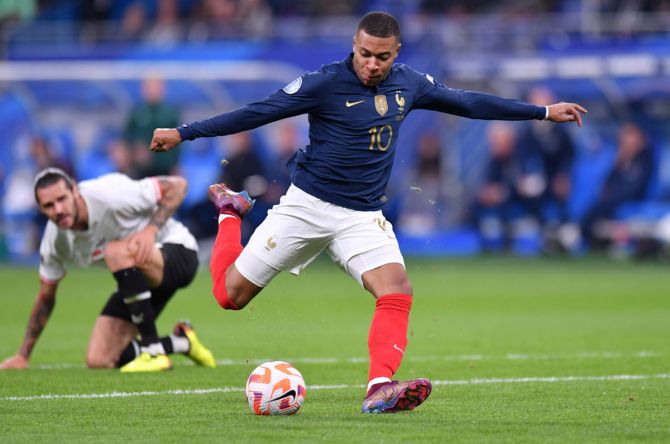 Defender Kounde joined a long French injury list when he limped off the pitch with a muscle problem and Maignan was replaced by Alphonse Areola at halftime due to a calf issue.

Mbappe tormented the Austrian defence with his pace and created space for his team mates, Jonathan Clauss just missing out on a goal early in the second half.

Mbappe broke the deadlock with a cool finish after beating five defenders following a perfect pass from Giroud.

It spurred Austria into action but they lacked accuracy in the box and it was France who scored again.

Giroud found the back of the net in the 65th minute from Griezmann’s pin-point cross for his 49th international goal, two shy of Thierry Henry’s national record.

Giroud was 70 days older than Roger Marche when he scored for France against Spain in 1959.

“Oliver deserves it, I am very happy for him. He had difficult periods with his club but always performed well with us. If I call him, it’s so he can score goals. And he had many opportunities,” Deschamps told L’Equipe.

The AC Milan striker was replaced by Ousmane Dembele to the Stade de France crowd’s standing ovation, leaving Deschamps, who has only called up Giroud in the absence of Benzema, with a tricky decision before November’s World Cup.

“Do not put words in my mouth. I did not say that he would be there. There is competition for every position and I can only take 26 players,” Deschamps said. 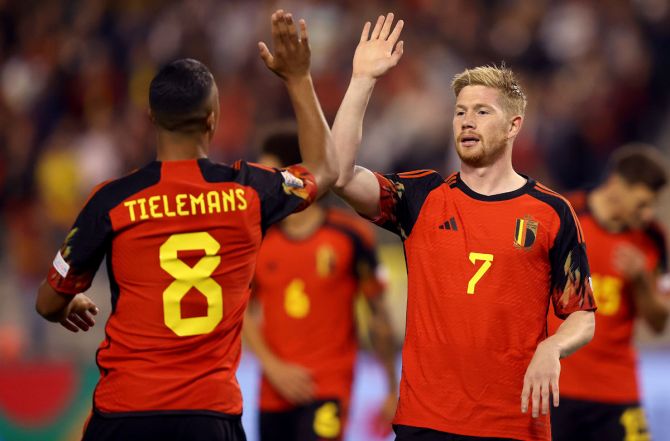 Belgium midfielder Kevin De Bruyne scored one goal and set up another as they profited from a strong first-half showing to beat Wales 2-1 in their Nations League A Group 4 clash at the King Baudouin Stadium on Thursday.

Wales were fortunate not to be more than 2-0 down at the break after goals by De Bruyne and Michy Batshuayi and several spurned chances, but the visitors halved the deficit early in the second period when Kieffer Moore headed in from close range.

Second-placed Belgium have 10 points from five matches and go to Amsterdam on Sunday. They must win by three goals to overtake the Netherlands, who have 13 points at the top of the group, and qualify for the Nations League semi-finals next year.

Wales have a home game against Poland on Sunday as they bid to avoid relegation from the pool. They are currently bottom with one point.

“I think we fully deserved to win, we dominated the first half and created a lot of chances,” De Bruyne told S4C. “Wales were playing man to man so there were more options in the first half.

“Then we started the second half poorly, we had to keep the ball as Wales were playing so deep and wait for the right moments.”

When De Bruyne netted after 10 minutes it stretched to 49 games Belgium’s incredible run of scoring, having last been kept out by France in the 2018 World Cup semi-final in St Petersburg.

Batshuayi teed up him up on the edge of the box and the his side-footed finish beat Wayne Hennessey in the Wales goal.

De Bruyne then struck the post with a shot from a similar position before he turned provider as his whipped cross laid on a tap-in for Batshuayi.

To their credit Wales came out a more organised side in the second half and seized the moment.

They pulled a goal back five minutes after the break when the lively Brennan Johnson’s trickery on the right wing produced a cross for Moore to score.

Belgium held on for the win but not before coach Roberto Martinez was red carded for holding the ball on the touchline deep into added time.

“It was always going to be a hard game. They were very good tonight,” Moore told BBC Radio Wales. “We come away not so much disappointed – we will take positives out of it and go again on Sunday.

“A win keeps us in the group so it’s full focus on Poland. I think we are in a good place, it’s our last home game before going to the World Cup so if we can leave on a high then great.” 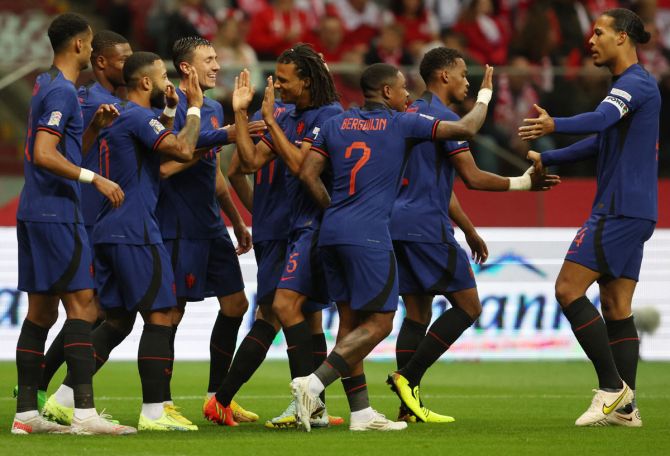 Cody Gakpo scored early and Steven Bergwijn added a second to earn the Netherlands a 2-0 away win over Poland on Thursday and put them within one point of winning their Nations League group.

The unbeaten Dutch have now won four of their five League A Group Four games and are three points ahead of Belgium, who beat Wales 2-1.

The Dutch need only a draw at home to Belgium in Amsterdam on Sunday to secure a place in next year’s four-team Nations League finals.

Gakpo’s 13th-minute opener at the Narodowy Stadium came at the end of a slick passing move as the striker had only to tap home Denzel Dumfries’ inch-perfect square pass after the Polish defence has been prised apart.

Bergwijn doubled the lead in the 60th minute, coming in off the left flank to play a clever one-two with substitute Vincent Janssen and curling the ball expertly into the net.

The victory was deserved by the Dutch deserved as their high pressing game regularly robbed Poland of possession and allowed the visitors to dictate the tempo of the game.

But it might have been a different scenario had Poland’s halftime substitute Arkadiusz Milik not missed from point-blank range after being set up by Przemyslaw Frankowski’s cross shortly after coming on.

It was Poland’s only clearcut chance but Milik inexplicably put his effort wide to help the Dutch to their first clean sheet in seven games this year.

Dutch coach Louis van Gaal surprised by choosing 38-year-old Ajax Amsterdam goalkeeper Remko Pasveer, making him the country’s second oldest debutant after Sander Boschker, who was almost 40 when he won his only cap in goal against Ghana in a World Cup warm-up friendly in 2010.

Van Gaal told Dutch television before kick-off he was “intrigued” to see what Pasveer might add to the team after a good start to the season with Ajax Amsterdam, but there was not much for the goalkeeper to do.

“We played well and this was a well deserved win,” he said.