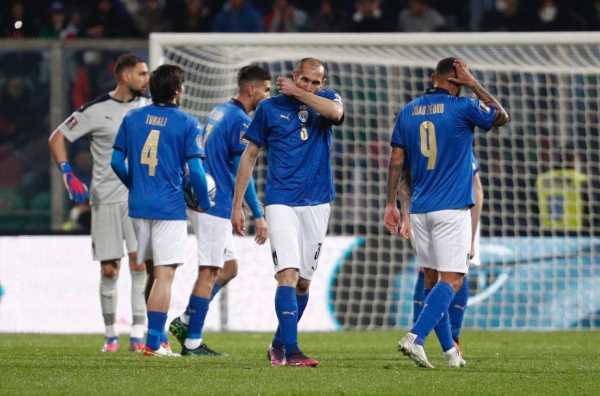 Eight months after winning the European Championship trophy and being feted as national heroes, Italy’s soccer team have crashed back to earth, missing out on the World Cup finals for the second time running.

“To Hell,” daily Corriere dello Sport said in its front-page headline, summing up the sense of horror after Italy lost 1-0 at home to little-fancied North Macedonia, ensuring they would not take part in the 2022 Qatar World Cup.

It was a shock repeat of four years ago, when Italy failed to reach soccer’s global showpiece tournament for the first time since 1958. But after the team’s victory in the European final against England last July, few people believed a repeat calamity was looming.

“This is an epoch-making disaster. The shame is worse than ever,” Il Messaggero wrote on Friday.
Italy have won the World Cup four times, most recently in 2006. However, they exited at the group stage in 2010 and 2014, and this latest setback suggested that the European triumph in 2021 was merely a blip in a prolonged period of decline.

Just like in 2018, Italy are the only former champions not to make it to the finals and newspapers saw the elimination as a reflection of wider problems in the national game.

For the last two seasons, no Italian teams have reached the quarter-finals of the prestigious Champions League, a trophy which has eluded Italy since 2010, with many domestic clubs weighed down by debt and unable to attract the top talent that once flocked to Serie A.

“The system, Italian soccer in its entirety, needs to be put on trial,” Italy’s top-selling sports daily Gazzetta dello Sport, wrote in an editorial, blaming a “total lack of vision” among sport administrators.

The newly appointed head of the top-flight Serie A league acknowledged that a shake-up was needed.

This time around there were no calls for the removal of coach Roberto Mancini, an urbane leader who still gets huge credit for masterminding the 2021 European Championship success. However, he himself has not ruled out stepping down.

“Let’s see. The disappointment is too big at present to talk about the future,” he said on Thursday when asked about his plans. “I just don’t know what to say.”

Germany will look to extend their winning run under coach Hansi Flick when they face Israel and Netherlands in the coming days but the team’s priority is to peak at the year-ending World Cup in Qatar, midfielder Ilkay Gundogan said on Friday. The Germans, four-time winners who suffered a shock first round exit at the 2018 World Cup, have won all seven of their matches under Flick, having also qualified for the World Cup at the end of the year.

“The excitement for this year is great,” Gundogan told a news conference. “It is a good start against a motivated and young Israeli team and then the test and the Dutch.” Germany host Israel in Sinsheim on Saturday before travelling to Amsterdam on Tuesday to face Netherlands in another friendly. “We want to start the year as successfully as possible. There is a lot at stake with the year ending with the World Cup in November and December,” Gundogan said.

“In the past year under Flick we got the chance to add more momentum to the team. We used the time pretty well. We are on a good path and we want to continue that. The team should peak at the tournament and that is our priority.”

Flick succeeded Joachim Loew after last year’s European championship last-16 exit to England, and has brought in a number of young players as he looks to shape a team that can again compete at the top level.