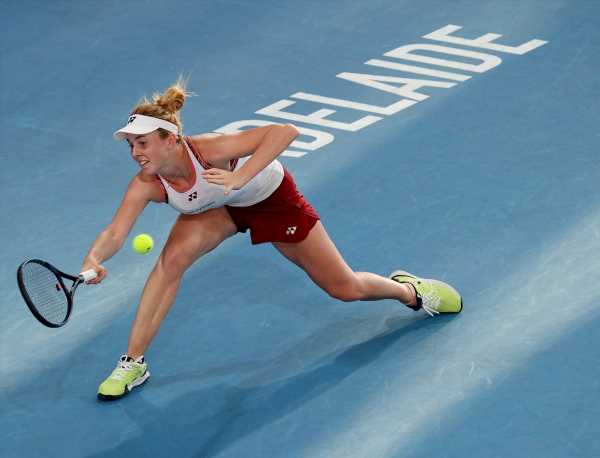 Noskova stuns Jabeur in Adelaide to set up Sabalenka showdown

Qualifier Linda Noskova continued her giant-killing run at the Adelaide International 1 on Saturday, as the 18-year-old toppled ailing world number two Ons Jabeur 6-3, 1-6, 6-3 to set up a final against second seed Aryna Sabalenka.

Czech Republic’s Noskova reached her first WTA Tour final on the back of her second top-10 victory this week after she downed Daria Kasatkina and the win follows a stunning upset of double Australian champion Victoria Azarenka.

Jabeur, last year’s Wimbledon and U.S. Open runner-up, had trouble with her lower back in the early stages of the clash and the Tunisian surrendered an early break to go a set down before taking a medical timeout.

She returned rejuvenated to grab the second set dropping only one game, but found herself a break down at 1-3 in the decider and Noskova held her nerve to grab the victory.

Sabalenka will look to stop the youngster in the final on Sunday after she made short work of Irina-Camelia Begu, sealing a 6-3, 6-2 victory to make her first final since beating former world number one Ash Barty in the 2021 Madrid title clash.

“I’m happy with the level I played today, especially with her different game,” Sabalenka said of Begu. “She’s playing a… a different style so I’m super happy that I’m able to win.”

Top seed Coco Gauff produced a commanding display for a 6-0, 6-2 win over Danka Kovinic at the Auckland Classic to reach her first final since a runner-up finish at the 2022 French Open.

A tenacious Taylor Fritz pulled off a 7-6(5) 7-6(5) win over Poland’s Hubert Hurkacz as the United States completed a 5-0 sweep on Saturday to reach the final of the United Cup mixed team tournament where they will square off against Italy.

Italy booked their place in the title clash of the inaugural $15 million event after taking an unassailable 3-1 lead in their semi-final against Greece.

The red-hot Americans had made a strong start having gone ahead 2-0 on Friday as Jessica Pegula and Frances Tiafoe scored convincing wins and world number nine Fritz held his nerve to finish the job against Hurkacz.

Indian Wells champion Fritz saved two set points while down 5-4 in the opening set as Hurkacz faltered and the American took the lead in the match when his opponent made another error at the end of a tight tiebreak.

Fritz, who won 88% of his first-serve points, needed a big serve to hold for 6-5 in the second set before claiming the win in another tense tiebreak to send his side through to a title clash with either Italy or Greece.

“It was great to get the win today to get us through. I had no doubt that if I were to lose that the rest of the team would have come through,” Fritz said.

“But I’ve played with Team U.S. a lot. I think it’s a huge advantage this time having the girls on our team because it just makes the whole team so much stronger.

“I’m super excited going into the final and I think we’ve been the favourites all week.”

Italy came into their clash with Greece holding a 2-0 lead after Martina Trevisan and Lorenzo Musetti won their matches but Stefanos Tsitsipas reduced the deficit with a thrilling 4-6, 7-6(2), 6-4 win over Matteo Berrettini.

In a high-octane match played in front of predominantly Greek supporters at Ken Rosewall Arena, Tsitsipas looked set for defeat as Berrettini dominated the early proceedings on the back of his booming serve and thunderous forehand.

But Tsitsipas flipped the script, edging the second set by forcing Berrettini into making uncharacteristic errors from the baseline. The world number four recovered after being broken in the decider to quell Berrettini and spark wild celebrations.

Lucia Bronzetti ensured there was no late comeback by getting past Valentini Grammatikopoulou 6-2, 6-3 to send Italy into Sunday’s final in Sydney.

Venus out of Australian Open following injury in Auckland

Seven-times Grand Slam champion Venus Williams pulled out of this month’s Australian Open due to injury, the organisers of the season’s first Grand Slam said on Saturday.

Williams was set to play her 22nd Australian Open after being awarded a wildcard to the Jan. 16-29 tournament.

The 42-year-old American, twice a finalist at Melbourne Park who is now ranked outside the top 1,000, was preparing for the tournament at the Auckland Classic where she got injured.

Williams crashed out of the U.S. Open in the first round with a loss to unseeded Belgian Alison Van Uytvanck and only returned to action in Auckland, where she downed compatriot Katie Volynets before losing to China’s Zhu Lin.

Swiatek pulls out of Adelaide due to shoulder injury

World number one Iga Swiatek has withdrawn from the Adelaide International 2 WTA 500 tournament starting next week due to a right shoulder issue, casting doubts on her fitness before the Australian Open later this month.

The three-times Grand Slam champion crashed to a 6-2 6-2 defeat against American Jessica Pegula in the United Cup mixed teams tournament in Sydney on Friday and was in tears in Poland’s dugout after the contest.

“Iga Swiatek has withdrawn from Adelaide 2 due to right shoulder injury,” the WTA Insider said in a tweet.

“Number four seed Caroline Garcia takes Swiatek’s top line in the draw and the next player to be seeded, Danielle Collins, moves into Garcia’s vacated spot.”

The Adelaide tournament will begin on Monday. Swiatek will hope to shake off the issue in time for the season’s first major which runs from Jan. 16-29.