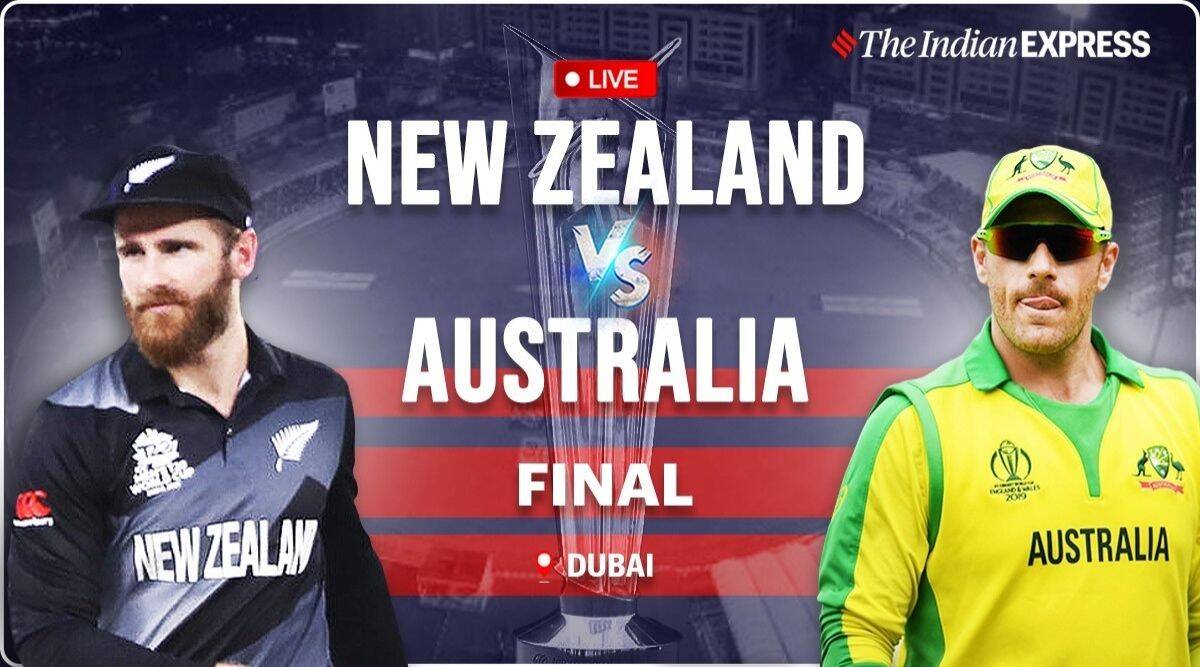 New Zealand vs Australia, T20 World Cup Final live score and updates: The fiestiness of Australia will clash with the tactical shrewdness of a perennially understated New Zealand when the Trans-Tasman rivals battle for their maiden T20 World Cup trophy here on Sunday. Considering how both Australia and New Zealand won their respective semifinals against fancied opponents, one can expect another dramatic finish at the “Ring of Fire”.

Australia, who have won a record five World Cup titles in 50-over cricket, have surprisingly not got their hands on the T20 showpiece.

New Zealand, on the other hand, have always been consistent in ICC events but now seem to have the self-belief of going all way under Kane Williamson’s astute leadership.

New Zealand, who have been the best bowling side of the group stage, showed their batting class in the semifinals against pre-tournament favourites England. Martin Guptill enjoys a good record against Australia in T20s and his opening partner Daryl Mitchell goes into the final having played the innings of his life. Skipper Kane Williamson is due for a big score and expect him to rise to the occasion on Sunday. Jimmy Neesham proved his value in the middle-order against England but New Zealand will miss the services of Devon Conway who punched his bat in frustration after getting dismissed in the semifinal and ended up breaking his right hand. Tim Seifert is set to replace him. The seasoned pace duo of Tim Southee and Trent Boult will be expected to keep Australian openers Aaron Finch and David Warner quiet in the powerplay.

The role of a finisher is arguably the toughest in T20 cricket and Marcus Stoinis has given himself a chance to succeed by failing multiple times. ‘You definitely do draw on your past experiences,’ Stoinis said the day after the Pakistan semi-final. ‘Something that’s probably lucky looking back is I’ve played a lot of cricket, I’ve played a lot of T20 cricket and I’ve sort of built that scar tissue. I’ve failed in situations and I’ve been told I can’t finish a game; we’ve heard all these sort of things before.

The two openers, Martin Guptill and Aaron Finch, are the leading run-getter for their respective sides in the tournament

Sodhi was Player of the Series for his haul of 13 wickets in the 5-match T20I series earlier in the year in New Zealand.

This is the first T20I for Starc, Cummins and Hazlewood against New Zealand

New Zealand 5 – 9 Australia. The two teams have faced off only once before in T20 World Cups, when New Zealand beat Australia by 8 runs on a slow pitch in Dharamsala, India.

“Everyone had written us off but we had a lot of confidence within. We’re really confident in the way that we were preparing, the way that our strategy was coming together. I think it hasn’t defied expectations. I think we came here with a really clear plan to win the tournament, and we still feel as though we’ve got the squad to do that.”

Here’s the Australian skipper sharing what they did after the early hiccup against England in the opening stage of the T20 World Cup:

“Not too many advantages to either side except that we do play each other and have done so recently on a number of occasions, and had some really good contests. It’s great that we’re playing our neighbor from the other side of the world in a World Cup final, and it’s a really exciting prospect for both teams.”

Here’s the New Zealand captain describing what transpired in the match against England when they needed 57 runs off the last 4 overs:

On the field, in a trans-Tasman rivalry, it’s big brother versus little brother, reputation-wise. In terms of form and consistency, New Zealand supersede the rest despite having only 68,383 registered cricketers – New Zealand Cricket data – in the country. Mumbai probably has more. But as New Zealand coach Gary Stead mentioned a few months ago, they have turned their weakness into their strength by focusing more closely on a pool of 90-odd cricketers, playing for the country or are considered good enough to play for the country in the future.

Ahead of the big clash, here is a look at both Australia and New Zealand’s road to the final. New Zealand have looked like the most composed side in the ongoing T20 World Cup. In both batting and bowling, they have been up to the mark. They have got three outstanding bowlers hunting the opposition as well as two effective spinners bowling economically in the middle.

Hello and welcome to live commentary of the Final of the T20 World Cup where the fiestiness of Australia will clash with the tactical shrewdness of a perennially understated New Zealand. Considering how both Australia and New Zealand won their respective semifinals against fancied opponents, one can expect another dramatic finish at the “Ring of Fire”. Australia, who have won a record five World Cup titles in 50-over cricket, have surprisingly not got their hands on the T20 showpiece. New Zealand, on the other hand, have always been consistent in ICC events but now seem to have the self-belief of going all way under Kane Williamson’s astute leadership. It will be their first T20 World Cup final and if they do end up winning it, it will be a remarkable achievement for a country of five million which keeps churning out world-class players. Everything’s on the line tonight.