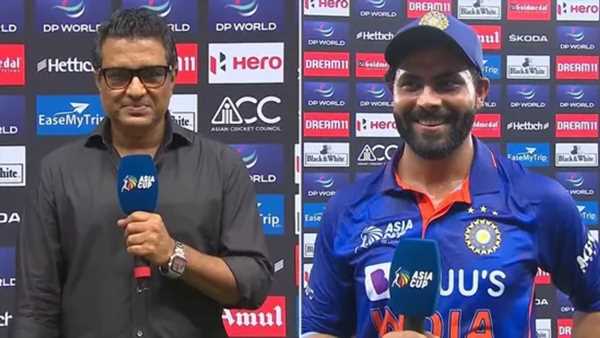 Three years after their social media spat, Sanjay Manjrekar and Ravindra Jadeja encountered each after the India-Pakistan game in Dubai on Sunday.

During the 2019 World Cup, taking exception to Manjrekar’s ‘bits and pieces cricketer’ remark about him on air, Jadeja had slammed the retired batter through a tweet.

After the India-Pakistan match ended on Sunday night, Manjrekar, part of the Star Sports broadcasting team, was assigned the task of interviewing Jadeja, who scored a crucial 35 off 29 balls and had a role to play in India’s win.

Manjrekar: ‘First question — You are ok to talk to me? Right, Jaddu?’

Jadeja: ‘Yeah, yeah (laughs). Absolutely!! I don’t have any problem.’

Thank heavens, these two interesting cricketers — Manjrekar’s candour is unusual for Indian cricket commentators, most of who tread on egg shells lest they upset the powers that be or the players; Jadeja’s all-encompassing intensity on the field whether he is fielding, bowling or batting makes him one of the best all rounders in the world — have buried the hatchet, we say.