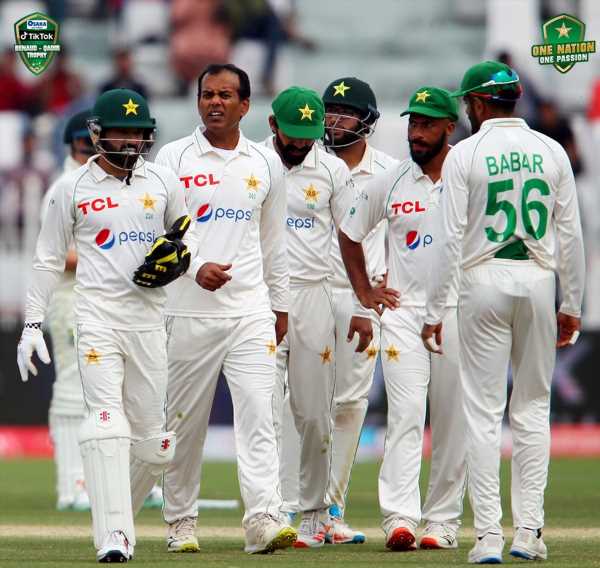 ‘The pitch did not have a great deal of pace and bounce in it for the seamers nor assisted the spinners as the match progressed. In my view this does not represent an even contest between bat and ball.’

The Pindi Cricket Stadium pitch for the first Test between Pakistan and Australia has been rated “below average” by the International Cricket Council (ICC) and given one demerit point after the first Test ended in a draw.

Pakistan scored 476/4 declared and 252/0 in their two innings while Australia scored 459 in their only innings on a flat track which resulted in just 14 wickets over five days.

The track was criticised by players and pundits, with Australia’s Pat Cummins saying it wasn’t “a fair contest” between bat and ball, while Steve Smith called it a “pretty benign” surface.

“The character of the pitch hardly changed over the course of five days and that there has been no deterioration apart from the bounce getting slightly lower,” match referee Ranjan Madugalle said in his report to the ICC.

“The pitch did not have a great deal of pace and bounce in it for the seamers nor assisted the spinners as the match progressed. In my view this does not represent an even contest between bat and ball.”

Pakistan board (PCB) chairman Ramiz Raja hit back at criticism of the lifeless Rawalpindi pitch in a video posted on the PCB’s social media, saying it was necessary to nullify the tourists’ attack while protecting the under-strength hosts.

However, following the ICC’s decision, the PCB said that a project to overhaul and relay all pitches in Pakistan was underway.

“The PCB remains confident and optimistic that we will not only see good conTests in the Karachi and Lahore Tests but in all future domestic international matches as well,” a PCB spokesperson said.

A “below average” rating by the International Cricket Council’s match referee brings one point, a “poor” rating brings three while the lowest rating of “unfit” comes with five.

The second Test begins in Karachi on March 12.