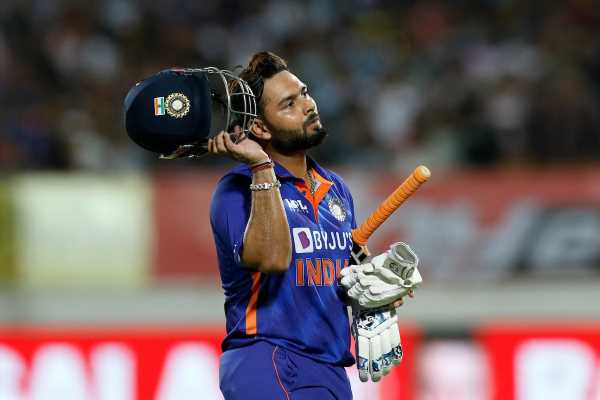 Rishabh Pant’s poor form in the ongoing home series continued as the wicket-keeper batter got out after scoring just 17 runs in the fourth T20I in Rajkot on Friday, June 17, 2022.

More than his unimpressive innings, Pant’s shot selection getting him out on the day didn’t sit well with experts.

The 24-year-old southpaw was handed captaincy duties following K L Rahul’s withdrawal from the series due to a right groin injury.

While Pant has remained a mainstay of the national team for three years now because of his ability in the middle order as well as his role as wicket-keeper, Wasim Jaffer feels his spot has become less cemented with the presence of other ‘keepers in the team.

‘Once K L Rahul comes back, he walks into the side. He is a wicket-keeper as well. If Dinesh Karthik is certain to play, he is also a wicket-keeper,’ Jaffer said on ESPNCricinfo.

‘The way Rishabh Pant has played recently; I won’t call him a certainty.’

Following M S Dhoni’s retirement from all international cricket in 2020, Pant has been the trusted player behind the stumps in all three formats. However, Jaffer thinks he must fight for his spot in the T20 team, especially after a couple of sub-par IPL seasons by his standards.

‘He needs to score runs and score pretty consistently. He hasn’t done that in the IPL or in any T20 internationals,’ Jaffer pointed out.

In the previous three matches in the South Africa series, Pant was dismissed early in his innings, failing to cross single digits.

While he did contribute with a quickfire 29 (16) in the first match in Delhi, Jaffer feels he needs to do more to keep his spot ahead of other talented Indian middle order batsmen.’

‘The way he has played in Test cricket and a few ODI matches,’ Jaffer added, ‘he hasn’t done that in T20Is. So I won’t say that Rishabh Pant is a certainty going forward.’