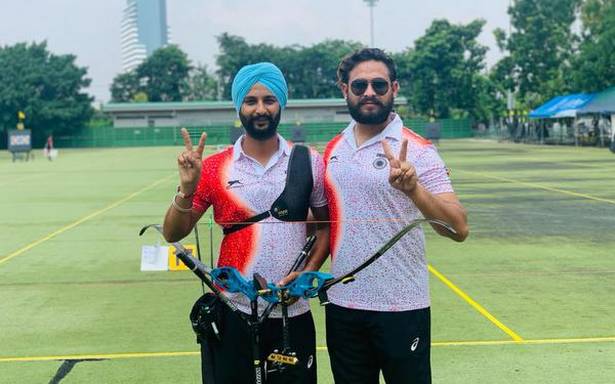 ‘His dedication level is extraordinary’

Coach Gaurav Sharma does not mind that he could not accompany his ward Harvinder Singh to Tokyo due to a stipulation on the number of accreditations. Rather, he is elated that his ward has made history by becoming the first Indian archer to claim a medal in the Paralympic Games.

Gaurav stayed in touch with Harvinder even after the Paralympic Committee of India (PCI) ignored the Archery Association of India’s (AAI) recommendation for coaches and support staff for the Tokyo Games.

“It does not matter that I could not go with him. The most heartening thing is he performed well and scripted history. Even though I was not present there, we stayed in touch through phone calls and discussed strategies. We also did video conferencing to exchange ideas. I am so delighted for him,” Gaurav told The Hindu on Friday.

Gaurav credited the Government support that helped Harvinder claim a bronze medal in recurve men’s open individual event. “Even though all training centres were closed due to the coronavirus pandemic, the Sports Authority of India kept its centre in Sonipat open because of which we could do unhindered training.”

According to Gaurav, Harvinder’s mental toughness helped him overcome difficult situations. “His dedication level is extraordinary and he is mentally so strong. He is very disciplined and sticks to his schedule for studies and archery,” said Gaurav, planning a grand welcome for Harvinder.

The Archery Association of India president Arjun Munda hailed Harvinder’s feat. “I have no words to express my delight. It is a moment to rejoice as it has filled every Indian with immense pride,” said Munda.