Images from Day 4 of the fourth Test between England and India, at The Oval, on Sunday.

Virat Kohli missed out on a half-century after another dismissal outside the off-stump even as India extended their lead to 230 runs by lunch on Day 4 of the fourth Test against England, at The Oval in London, on Sunday.

At the break, India were 329 for 6, with Rishabh Pant unbeaten on 16 batting and Shardul Thakur on 11.

Earlier, in the morning session Ajinkya Rahane failed to prove his worth, as Chris Woakes (25-8-47-2) dismissed him with an off-cutter for a duck.

Before that the England pacer sent back Ravindra Jadeja (17) with a leg-cutter (off-cutter for the batsman) after the left-hander put on 59 for the fourth wicket with skipper Kohli, who was dismissed by Moeen Ali after a stylish knock comprising seven boundaries.

A slider from Moeen (19-0-79-1) saw Kohli play by plonking his front-foot way down the track. He wanted play for the off-break, but as it is in the case of sliders, the ball went straight and took the outside edge which lodged into Craig Overton’s big palms at first slip. 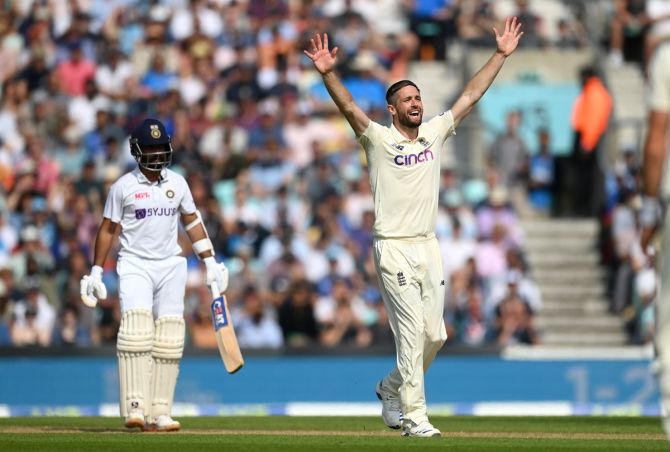 Kohli, who came in at an overnight score of 22, looked comfortable as the copybook cover drive off James Anderson suggested. He looked mostly in control, but the same can’t be said about some of his other teammates.

Jadeja was more intent on leaving deliveries and let Kohli do all the scoring before Woakes got one to jag back off length and hit him on the pads.

India’s vice-captain Rahane cut a sorry picture during his eight-ball stay. He was adjudged out earlier but the Decision Review saved him. He wasn’t as lucky the second time as Woakes’s delivery hit him below the knee roll.

Hoping against hope, Rahane asked Kohli if he could review and the captain answered in negative.

After another failure the veteran of 78 Tests is slowly making his place in the playing eleven untenable.