Images from Tuesday’s first One Day International between India and Australia, at the Wankhede Stadium, in Mumbai.

Shikhar Dhawan hit a half-century before Australia pulled things back to dismiss India out for 255 in the first One Day International of the three-match series, at the Wankhede stadium in Mumbai, on Tuesday.

Dhawan looked in great touch during his 91-ball 74 and, in the company of K L Rahul (47), shared a second-wicket stand of 121 runs off 136 balls to set the base for India’s total. However, the home side failed to capitalise.

Sent in to bat, India were dealt an early blow when they lost Rohit Sharma (10), caught by David Warner at mid-off off Mitchell Starc (3/56). 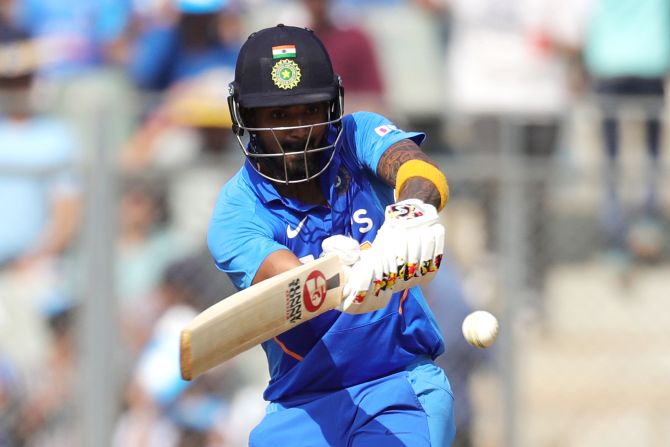 Rahul joined Dhawan at the crease and the duo played fluently without much trouble against a formidable Australian attack.

After adopting a cautious approach initially, Dhawan upped his ante and started to play his shots, while, at the same time, gave due respect to the good deliveries.

Dhawan showed his class and played all kinds of shots to register his fifty in 66 balls with a single off leg-spinner Adam Zampa (1/53) in the 20th over.

Soon after reaching his fifty, Dhawan got a reprieve when he was dropped by Warner at midwicket off Ashton Agar (1/56). 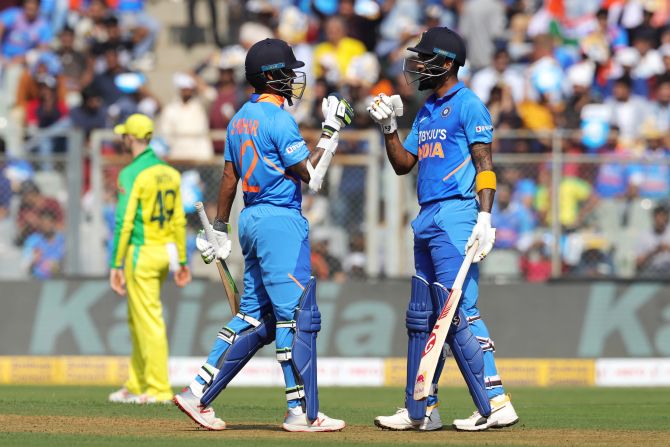 The two went about their business in style, picking up runs off bad balls before both departed in consecutive overs.

Just three short of his fifty, Rahul gave a straight forward catch to Steve Smith at covers off Agar and then, in the next over, Dhawan was caught by Agar off Pat Cummins (2/44).

While Rahul hit four boundaries during his 61-ball knock, Dhawan’s innings was laced with nine fours and one six. 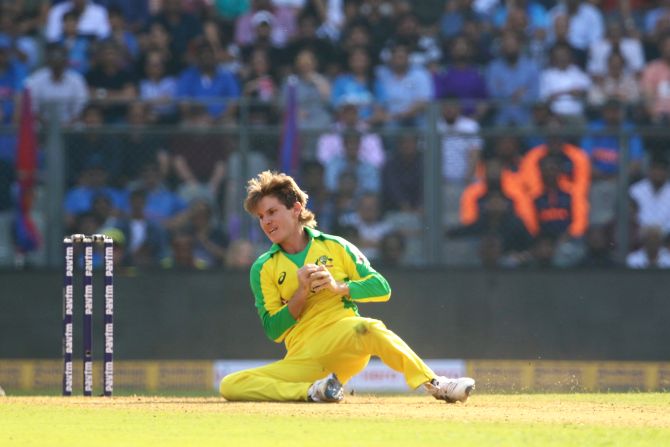 Dropping himself to No. 4 to accommodate both Dhawan and Rahul in the side, Virat Kohli (16) was in attacking mode from the onset, but didn’t last long as Zampa took a sharp catch off his own bowling to dismiss the Indian skipper.

Shreyas Iyer followed suit when Starc induced an edge an over later and Alex Carey did the rest behind the stumps.

Rishabh Pant (28) and Ravindra Jadeja (25) shared 49 runs for the sixth wicket before the duo perished in consecutive overs as India lost the plot.

Towards the end, Kuldeep Yadav (17) and Mohammed Shami (10) struck some useful boundaries.