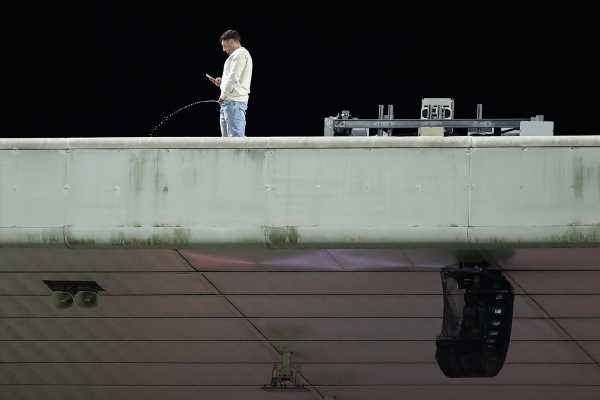 Rugby Australia have handed a life-time ban to a fan who climbed onto the roof of a stand at Sydney Cricket Ground and urinated during the Test against England on Saturday.

A 31-year-old man was arrested after the incident, which was filmed by other fans in the sellout crowd of 43,274 and posted on social media.

“The deplorable actions of the alleged intruder that made his way to the roof of the grandstand were disgraceful and dangerous,” Rugby Australia said in a statement.

“This individual has been issued with a life ban from Rugby Australia events – and we will continue to support the authorities in their handling of the matter.”

Video also emerged of another fan berating England coach Eddie Jones from the sidelines as he walked past the historic Members’ Stand.

The Australian coach reacted angrily to being called a “traitor” by the fan and had to be held back by a security guard.

“The offensive remarks made by spectators … towards England staff were unacceptable – and not representative of the values of rugby,” the statement added.

“We have a zero-tolerance policy for inappropriate behaviour, and we are working with Venues NSW on appropriate sanctions for these individuals.”

Australia’s first match at the SCG since 1986 will probably be the last for many years with the finishing touches being put to the rebuilt Sydney Football Stadium next door ahead of its opening on September 2.

England won the deciding third Test 21-17 on Saturday to clinch the series 2-1.