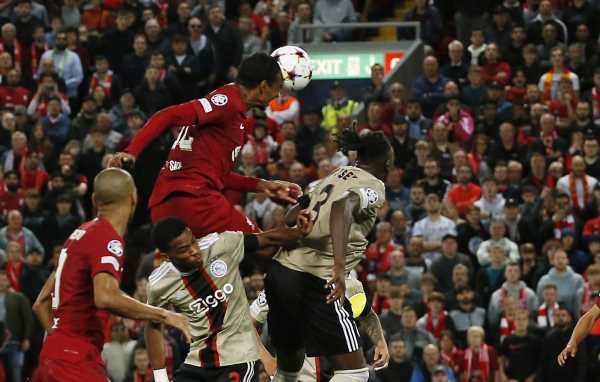 A round-up of Tuesday’s action in the UEFA Champions League.

Joel Matip headed in an 89th-minute winner as last season’s runners-up Liverpool left it late to beat Ajax Amsterdam 2-1 in their Champions League Group A match at Anfield on Tuesday.

Juergen Klopp’s side had lost their opening game in the group 4-1 at Napoli and were heading for another disappointing result until the centre back rose to meet a corner, which appeared to be cleared off the line, but the assistant referee raised his flag to indicate a goal.

It was an improved performance from the English team but one which was still far below their best.

Mohamed Salah fired the home side ahead in the 17th minute after being picked out by Diogo Jota, the Egyptian beating Ajax keeper Remko Pasveer with a trademark finish.

But the lead lasted just 10 minutes before Ajax pulled level with a stunning strike from Mohammed Kudus who worked himself some space in the box before hammering the ball into the top corner. 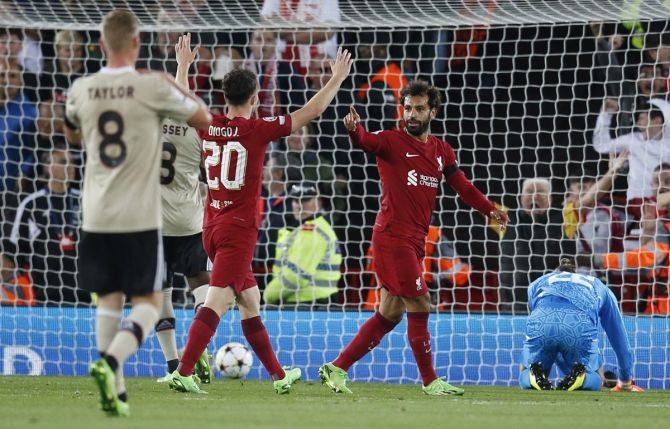 Liverpool responded well to the setback though with Virgil van Dijk forcing Pasveer into action with a firm header from a Trent Alexander-Arnold corner in the 35th minute.

Alexander-Arnold then went close himself — bursting into the inside-right channel, he cut inside on to his left foot and fired a shot straight at Pasveer’s chest and then the Ajax keeper reacted well to keep out the follow-up shot.

Liverpool enjoyed the bulk of pressure after the break but Ajax fullback Daley Blind wasted a great chance to put the Dutch side ahead when he was left unmarked at the back post but headed wide.

Substitute Darwin Nunez should have won the game for Liverpool in the 83rd minute after he was slipped in by Salah but the Uruguayan striker scuffed his shot wide from a great position inside the box.

A deflected effort from Salah then struck the post before, from the resulting Kostas Tsimikas corner, Matip rose to head in the winner.

Liverpool will be relieved simply to have got the three points on the board after a difficult start to the season.

There will also have been some relief among club officials and the broader English football community that there was no chanting or booing during the pre-match tribute to Queen Elizabeth.

There had been some concern that some Liverpool fans, who had booed Prince William at Wembley Stadium in May, would not respect the ‘period of silence’.

There was no serious disruption although a few isolated shouts did interrupt the silence which lasted only 25 seconds, rather than the usual one minute. 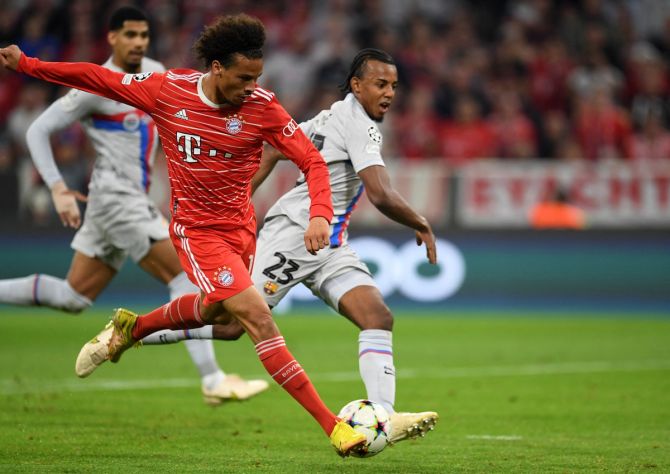 Bayern Munich scored twice in four minutes against the run of play through Lucas Hernandez and Leroy Sane to beat Barcelona 2-0 in their Champions League Group C match.

It was an unhappy return to Munich for Barca striker Robert Lewandowski, who left the Bavarians in the summer after eight years.

The Germans now top of their group on six points from two matches.

Barcelona are on three points, along with Inter. Viktoria Plzen are in last place.

Barcelona were dominant for 50 minutes and have only themselves to blame for not taking the lead, with Lewandowski coming close twice and Pedri and Gavi also missing golden chances.

The hosts, who had keeper Manuel Neuer to thank for keeping them in the game, scored five minutes after the restart with defender Hernandez’s header from a corner.

Before Barcelona had time to regroup, Bayern struck again when Jamal Musiala flicked a perfect pass for Sane and the Germany international slipped the ball past keeper Marc-Andre ter Stegen.

Pedri hit the post in the 63rd as Barca tried to bounce back but the Germans comfortably held on for the three points. They next host Czech side Plzen on October 4. 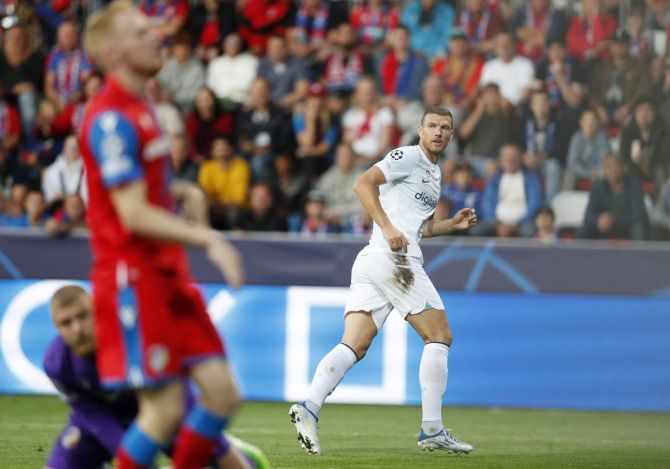 Edin Dzeko scored one and created another as Inter Milan cruised to a 2-0 victory at Viktoria Plzen in Champions League Group C.

Inter controlled the match from the start and opened the scoring in the 20th minute when Joaquin Correa picked out an unmarked Dzeko, whose right-footed shot in the penalty area beat Plzen keeper Jindrich Stanek.

The Czech champions spent most of the game defending and faced an uphill battle after Pavel Bucha was sent off in the 61st minute for a dangerous tackle that caught Inter midfielder Nicolo Barella on the shin.

The visitors doubled their lead 10 minutes later on the counter attack when Dzeko turned provider with a clinical pass that allowed Denzel Dumfries to slot home.

Plzen brought on attacking players after they went down to 10 men but never really threatened and finished the match with only one shot on target to Inter’s seven, with the visitors controlling nearly 70 percent of possession.

Inter coach Simone Inzaghi said with three matches in six days, he needed to rotate his squad against a Plzen side that played physical football throughout the match.

“We are happy, because we knew we couldn’t underestimate our opponents and we didn’t,” Inzaghi said.

“The boys were good. They remained focused and I congratulated them in the changing room after the final whistle.”

After losing 2-0 to Bayern Munich in their opening match, Inter moved to three points, while Plzen remain pointless after their opening two games.

Bayern Munich take on Barcelona in the other Group C match on Tuesday. 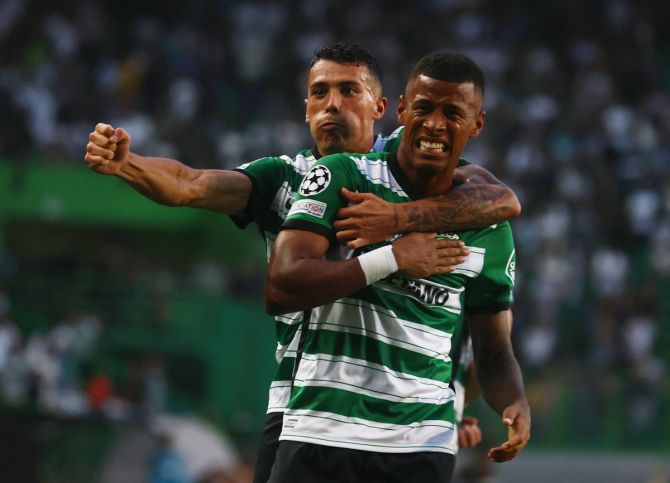 Tottenham Hotspur suffered their first defeat of the season as Sporting snatched a 2-0 home win over Antonio Conte’s side in the Champions League with goals in added time from substitutes Paulinho and Arthur Gomes.

Spurs created the better chances in an open and entertaining match but Sporting striker Paulinho broke the deadlock in the 90th minute with a glancing header from a corner.

Brazilian forward Gomes, who had only come onto the pitch after the goal, made sure of the victory with a superb strike in the second minute of added time, finishing from close range after a breathtaking run into the box.

There was a minute’s silence to commemorate the death of Queen Elizabeth II, which led to all matches in the United Kingdom scheduled for last weekend being postponed and leaving Spurs with extra time to prepare for the trip to Portugal.

Tottenham’s Richarlison, who scored both goals in last week’s 2-0 win over Olympique de Marseille, had the ball in the net late in the first half but his effort was ruled offside.

Moments later Edwards almost scored a remarkable individual goal, dancing his way from the halfway line into the area before playing a one-two with Francisco Trincao and then shooting at goal, only to be denied by the leg of goalkeeper Hugo Lloris.

Richarlison missed further chances in the second half while Harry Kane narrowly failed to get on the end of a low cross from Ivan Perisic after the Croatian had torn down the left wing.

The game looked to be heading for a draw until Sporting midfielder Pedro Porro went on a late marauding run and curled a shot towards goal which Lloris just managed to tip over the bar.

His effort galvanised the home crowd and the team responded to grab a victory that gives them control of the group.

Spurs host struggling Leicester City in their next Premier league game, returning to European action at Eintracht Frankfurt on Oct. 4, when Sporting play away to Marseille. 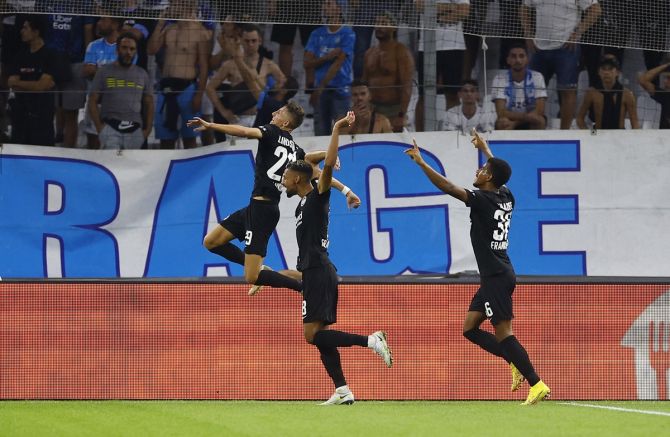 Olympique de Marseille’s chances of reaching the knock-out phase of the Champions League were dented when they were beaten 1-0 at home by Eintracht Frankfurt on Tuesday, their second defeat in as many games.

Marseille next host Sporting while Tottenham will travel to Frankfurt in the next round of matches on October 4.

Marseille enjoyed possession and dominated in the first half, until Valentin Rongier blundered a pass in the area to allow Lindstrom to fire home with a low shot two minutes before the break.

The hosts were forced to take risks in the second half and Eintracht came close to doubling their advantage when Lindstrom’s angled volley rattled the bar at the end of a quick counter-attack.

Dimitri Payet, who was handed a rare start by coach Igor Tudor, was replaced on the hour, as was Alexis Sanchez, with Cengiz Under and Luis Suarez coming in.

The substitutions spurred OM into action but Rongier missed a sitter in the 66th minute as the French side piled on the pressure.

Under got his legs tangled up in the area and wasted another golden opportunity.

Frankfurt continued to threaten, too, and Daichi Kamada’s goal after yet another counter-attack was ruled out for off-side, leaving Marseille with some hope of grabbing a point.

But they lacked sharpness and were left contemplating the gap between Ligue 1, where they have won six and drawn one, and Europe’s premium club competition, in which they have now lost all their last 16 matches.