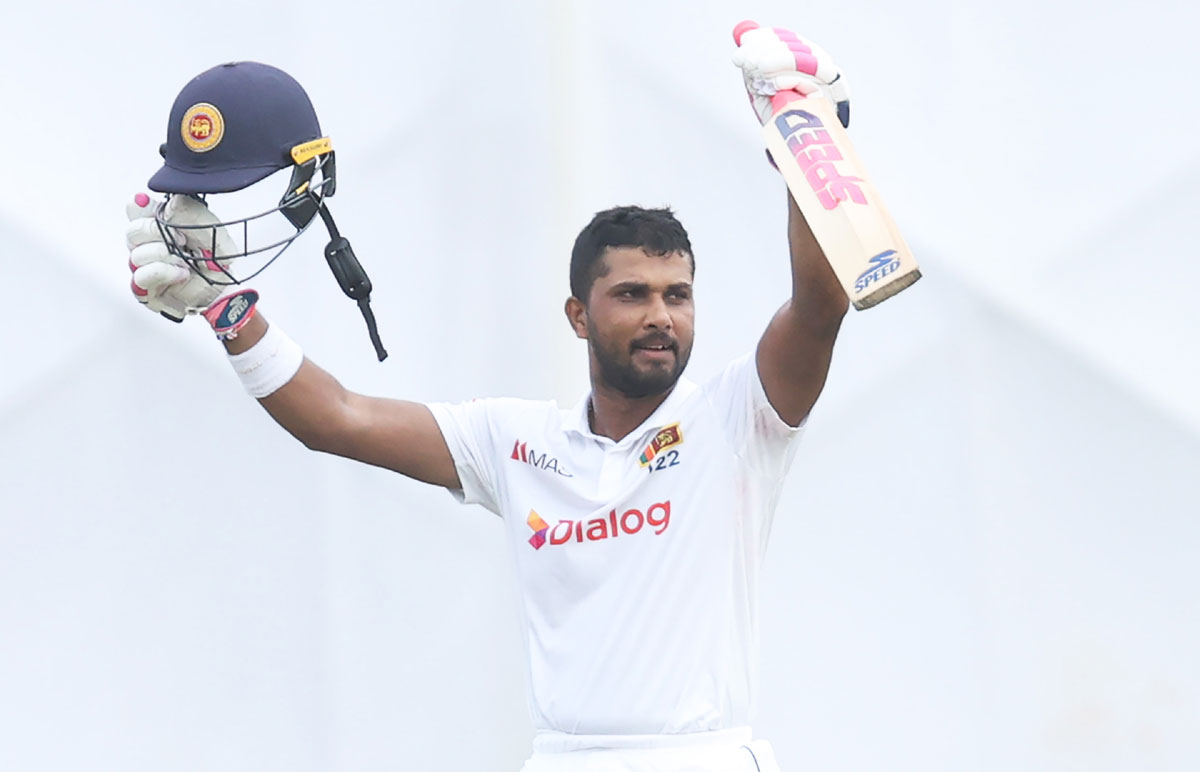 Images from Day 3 of the second and final Test between Sri Lanka and Australia in Galle on Sunday.

Dinesh Chandimal smashed 118 not out and Kamindu Mendis produced a half-century on debut to help Sri Lanka eclipse Australia’s first innings 364 on day three of the second Test in Galle on Sunday.

The hosts finished day three on 431/6 for a lead of 67 after five of their top six batsmen registered 50-plus scores at the Galle International Stadium.

Chandimal added 83 runs with Angelo Mathews (52) and 133 with Kamindu (61) to keep alive Sri Lanka’s hopes of a series-levelling victory.

Chandimal hit nine fours and a six in his patient knock and had Ramesh Mendis giving him company on seven at the other end at stumps on the third day. Earlier, Nathan Lyon (2/160) extracted sharp turn from the track and one of his deliveries spun significantly from outside the off-stump to rap overnight batsman Kusal Mendis (85) on his pad.

The batsman reviewed the lbw decision but could not get it overturned.

Chandimal attacked soon after his arrival, hitting Lyon to the boundary through cover and followed it by smashing the off-spinner over his head for six.

Mitchell Starc (2/47) struck after the lunch break to snap the burgeoning Chandimal-Mathews stand.

Mathews had struggled against spin but succumbed to pace, offering a bat-pad catch to Marnus Labuschagne at short leg.

Chandimal got a life on 30 when he edged Starc but umpire Kumar Dharmasena turned down Australia’s appeal for a catch.

Replays confirmed the bat-ball contact but Australia had used up all three reviews in the morning session itself and could not challenge it. Kamindu survived a stumping opportunity on 43 when he charged out to Lyon and Alex Carey fumbled with the ball.

Kamindu, one of the three debutants Sri Lanka fielded after five COVID-19 cases in their camp, batted with great composure hitting seven boundaries before dragging a Mitchell Swepson delivery onto his stumps.

Niroshan Dickwella could have hurt Australia with his natural aggressive batting but Lyon ensured the left-hander’s stay was brief.

Chandimal took a single off Lyon to bring up his hundred, taking his helmet off and soaking the applause.

Carey missed a second stumping opportunity when Swepson lured Ramesh out of the crease but the wicketkeeper could not gather the ball.