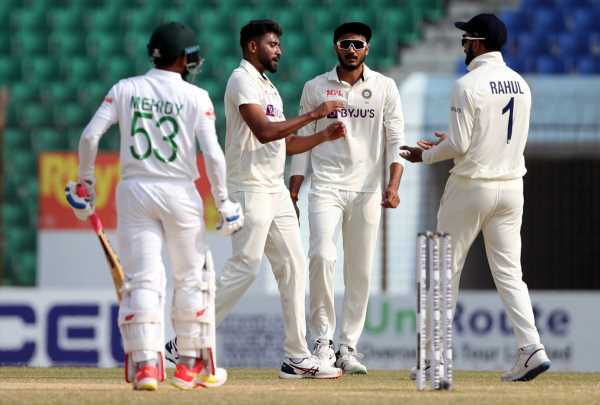 Images from Day 5 of the first Test between Bangladesh and India on Sunday.

India took a 1-0 lead in their two-Test series against Bangladesh after winning the first match in Chattogram by 188 runs as the hosts were bowled out for 324 on the final day of play on Sunday.

Resuming on an overnight score of 272/6 in their second innings, Bangladesh soon lost the wicket of Mehidy Hasan Miraz (13) to Mohammed Siraj. Captain Shakib Al Hasan (84) was next to depart as his entertaining display, which featured six fours and six sixes, came to an end after Kuldeep Yadav found the middle stump as Shakib tried an aerial stroke.

Kuldeep then dismissed Ebadot Hossain for a duck, before Axar Patel bowled out Taijul Islam for the same score, finishing with figures of 4/77 in the second innings.

The second and final Test will be played in Dhaka from December 22 to 26.