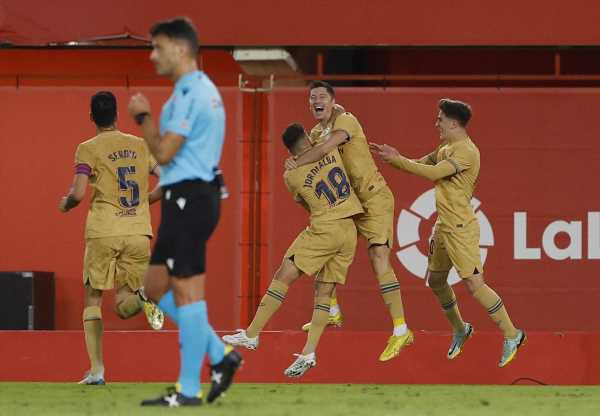 A round-up of Saturday’s action in LaLiga, Ligue 1 and Serie A.

In-form Robert Lewandowski scored again to give Barcelona a 1-0 win at Mallorca in LaLiga on Saturday.

Barcelona, however, made the most of what was their only clear scoring opportunity that they had thanks to the genius of Lewandowski.

The Polish striker secured Barca’s points in the 20th minute when he sped into the area, made a brilliant cut inside to clear a defender and slotted the ball to the goalkeeper’s left.

Lewandowski, who joined Barca from Bayern Munich in July, became the first player to score in six consecutive LaLiga weeks since Ruud van Nistelrooy with Real Madrid in the 2006-07 season.

It was the Pole’s ninth goal of the season, and eighth in the league. No player has scored eight goals in his first seven LaLiga games since Christian Vieri with Atletico Madrid in 1997.

Barcelona’s victory lifted them to the top of the table on 19 points, one ahead of Real Madrid who have a game in hand and host Osasuna on Sunday aiming to restore their lead.

Mallorca are 10th in the standings on eight points after seven games.

“It’s a pity playing such a complete game like we did against one of the best teams in the world and not being able to go out with at least a point,” Mallorca left back Jaume Costa told Movistar Plus.

Xavi gave teenager Ansu Fati his second start of the season and his first in the league. The 19-year-old, fighting his way back from four surgeries to repair an injury to his left knee suffered in late 2020, started the move that led to Barca’s goal, stealing the ball on the left and passing to Lewandowski.

But it was Ter Stegen who was responsible for Barca coming away with a win.

He made a magnificent stop with his right knee in the 35th minute, denying a close range first-touch strike from Jaume Costa.

Mallorca kept pressing after the break and the German keeper was once again there to stop an equaliser, deflecting an Antonio Sanchez shot from inside the box. He showed up again just before the final whistle to deny Kang-In Lee and secure the three points. 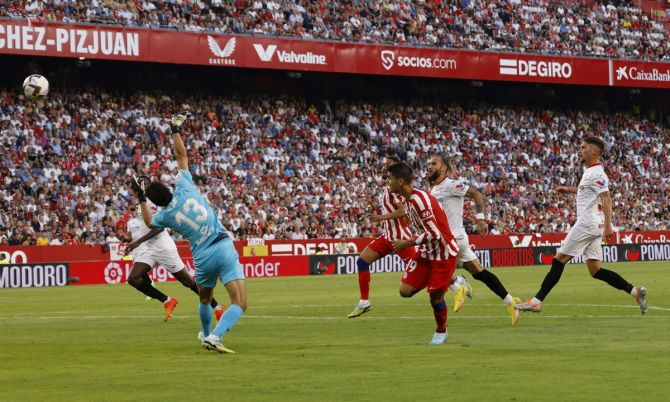 Sevilla slumped to a 2-0 home defeat by Atletico Madrid to continue their poor start to the LaLiga campaign, having won only one match in all competitions so far this season.

The record six-time Europa League winners are 15th in the league standings on five points, one above the relegation zone.

It’s Sevilla’s worst start to a league season since being promoted back to the top-flight in 2001.

Marcos Llorente scored Atletico’s first in the 29th minute, firing a shot to the right of the goalkeeper and into the back of the net.

Atletico’s win lifted them to fifth on 13 points, five behind city rivals and leaders Real Madrid.

It was a solid and dominant performance by Atletico who bounced back after two consecutive losses against Bayer Leverkusen in the Champions League and Real in the league.

Coach Diego Simeone was able to revert to his typical defensive style thanks to having defenders Jose Maria Gimenez and Stefan Savic back from injury.

Simeone was also finally able to start Axel Witsel as a midfielder instead of improvising the Belgium veteran as a central defender and the 33-year-old was one of Atletico’s best players.

Atletico took the lead through Llorente after Sevilla lost the ball from a throw-in close to their own area.

Koke played the ball the left to Llorente who was all alone inside the box to slot the ball in, ending his LaLiga scoring drought that lasted 47 matches. His last strike in the league was on May 1, 2021, in Atletico’s 1-0 win at Elche.

Atletico had several chances to extend their lead, but goalkeeper Bono made saves to deny Antoine Griezmann, Matheus Cunha and Angel Correa.

However, he was not able to stop Morata from scoring early in the second half, when the Spain forward took advantage of a clever recovery by Cunha to speed into the area and lob the ball over the goalkeeper.

There was also a record for long-serving Atletico midfielder and captain Koke who made his 554th appearance for the club, the most of any player. He beat the previous best of Atleti great Adelardo Rodríguez, whose record of 553 had stood for 46 years.

Mbappe to the rescue as PSG reclaim Ligue 1 top spot 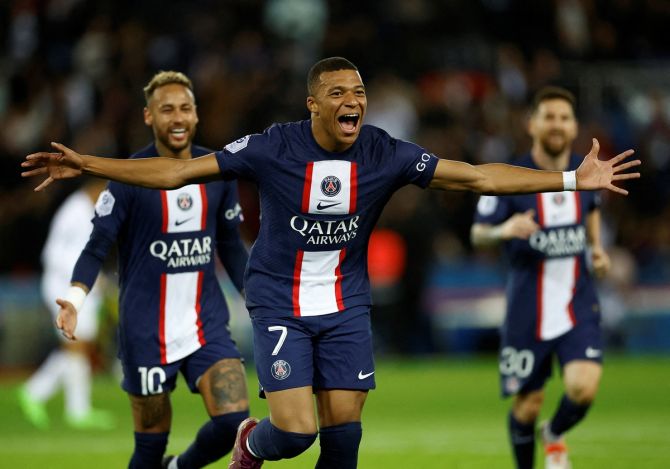 Kylian Mbappe came off the bench to give Paris St Germain a 2-1 home win against Nice as the French champions reclaimed top spot in Ligue 1.

Mbappe netted seven minutes from time to put PSG on 25 points from nine games, two ahead of Olympique de Marseille, who beat Angers 3-0 away on Friday.

Nice are 13th on eight points.

PSG, who face Benfica away on Wednesday in a Champions League group-stage match, struggled against a sturdy Nice side until Mbappe came on in the 59th minute.

Mbappe had been given a breather by manager Christophe Galtier, staying on the bench as Hugo Ekitike started alongside Lionel Messi and Neymar up front.

Messi opened the scoring in the 28th minute when he curled a perfect free kick into the back of the net after being fouled by Nice captain Dante.

The Argentine came close to scoring again on the stroke of halftime with a fierce strike, only for Kasper Schmeichel to tip the ball over the crossbar.

Nice came back from the interval with all guns blazing and they were rewarded after two minutes when Gaetan Laborde latched on to a cross from Youcef Atal to equalise.

The goal prompted Galtier to send on Mbappe in place of Ekitike.

The France forward threatened with his pace but lacked sharpness in the area, until the 83rd minute when he connected with Nordi Mukiele’s cross to put the hosts ahead.

It was Mbappe’s eighth goal in Ligue 1 this season, putting him at the top of the scoring charts alongside Neymar. AC Milan snatched a dramatic 3-1 win at Empoli in Serie A as three goals in the game were scored in second half stoppage time.

Milan started the game aggressively and kept up the intensity throughout the first half, but despite a number of chances could not beat Empoli goalkeeper Guglielmo Vicario.

Rafael Leao could have sent Milan into an early lead in the ninth minute with a low shot from inside the box, but Vicario was down fast to save with his legs.

Manager Stefano Pioli’s injury woes continued when winger Alexis Saelemaekers needed to be substituted in the 33rd minute. Only three minutes later, right back Davide Calabria needed to be carried off the field on a stretcher after a knock. Simon Kjaer also needed to go off in the 73rd minute due to an injury.

Ante Rebic managed to break the deadlock in the 79th minute with a controlled shot inside the area after being played in with a great pass from Leao.

Nedim Bajrami thought he had rescued a point for Empoli two minutes into stoppage time with a goal from a free-kick, creating euphoria among the home fans.

However, Fode Ballo-Toure saw it differently as only two minutes later he managed to put the ball beyond Vicario after a headed assist from Rade Krunic.

Leao made sure of the win when he scored Milan’s third in the seventh minute of stoppage time with a beautiful chip over Vicario.

Milan jumped to third place in the standings with 17 points, three behind leaders Napoli. Atalanta and Udinese have yet to play this weekend.

Empoli are in 14th place with seven points. Milan travel to play Chelsea on Wednesday in the group stage of the Champions League. 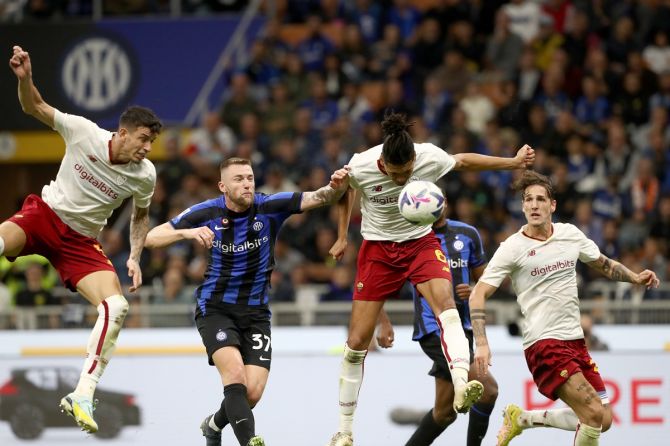 A header by defender Chris Smalling in the second half helped AS Roma seal a 2-1 victory at Inter Milan in Serie A on Saturday.

The former England international headed home in the 75th minute after a brilliant free kick by Lorenzo Pellegrini from about 44 yards.

“It was important to win, I hope to continue scoring many goals,” Smalling told DAZN.

Inter defender Federico Dimarco opened the scoring in the 30th minute when Nicolo Barella met him with a pass in the middle of the box, with his low strike taking a deflection off keeper Rui Patricio but still reaching the corner of the net.

Inter striker Edin Dzeko had scored in the 11th minute as Roma’s defence faltered but his goal was chalked off by VAR for offside.

Roma’s Leonardo Spinazzola made an attempt on goal eight minutes later from the edge of the box but was denied by Samir Handanovic. Forward Paulo Dybala’s effort from a rebound quickly followed, but it was also saved by the Inter goalkeeper.

Roma eventually netted an equaliser through Dybala in the 39th minute, his fourth goal in Serie A this season, following a superb cross by defender Spinazzola.

Inter came close to regaining the lead in the 63rd minute through midfielder Hakan Calhanoglu but his free kick crashed against the woodwork.

Inter have lost four out of eight league games this season, a low they have hit only once before in their history, in the 2011-2012 campaign.

Roma, who are fourth in the table with 16 points after eight games, host 15th-placed Lecce on October 9 while Inter, seventh on 12 points, travel to 11th-placed Sassuolo next Saturday.