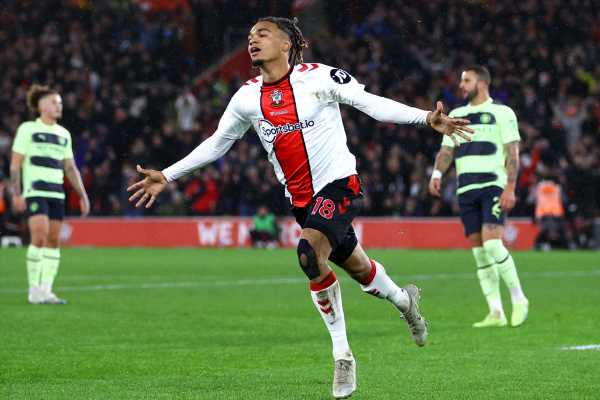 Champions Manchester City crashed out of the League Cup after suffering a shock 2-0 defeat at struggling Southampton in the quarter-finals on Wednesday.

Southampton, bottom of the English Premier League table, scored twice in the first half through Sekou Mara and Moussa Djenepo and City never seriously threatened to get back into the match.

Mara scored his first goal for Southampton in the 23rd minute as he connected well with a whipped cross by Lyanco and the hosts doubled the lead five minutes later when Djenepo spotted City goalkeeper Stefan Ortega off of his line and curled a stunning effort into the top corner.

City, who have won the League Cup six times since 2014, failed to register a shot on target as the second-half introduction of substitutes Kevin de Bruyne and Erling Haaland failed to spark a revival for Pep Guardiola’s side.

“(It is) a special night. These games are special to play in especially when you’re struggling in the league. We knew this was a distraction from the league and a great showcase. We showed no fear.

“It’s always tough when you’re in the position we are. The manager has been excellent and has given us fresh ideas and new energy. He wanted us to be bold and aggressive.

“We have been guilty in the past of having a result at halftime and dropping off. We showed a different part of our game. We thoroughly deserved the win.” City came into the game off the back of a 4-0 demolition of Chelsea in the FA Cup on Sunday but failed to replicate the free-scoring form.

Manager Pep Guardiola named a strong side with Joao Cancelo, Jack Grealish, Ilkay Gundogan and Kalvin Phillips among the starters, yet apart from an early shot dragged wide by Gundogan they made little impression on the game.

It was Grealish who had made the error which led to the hosts’ opening goal, giving away possession to Lycano who raced up the wing before providing the cross for Mara.

Jones has failed to halt Southampton’s poor Premier League form since taking over in November, but has won all three of his team’s games in cup competitions – against Lincoln City, Crystal Palace and now City. Nottingham Forest beat Wolverhampton Wanderers 4-3 on penalties in their League Cup last-eight game on Wednesday to reach a cup semi-final for the first time in over two decades.

Forest keeper Dean Henderson made the decisive save from Joe Hodge’s spot kick in the shootout, after the game had finished 1-1 after 90 minutes, to send his side through to their first semi since they reached the League Cup final in 1992.

Willy Boly struck after 18 minutes against his former club to give Forest the lead, converting from close range after an initial Serge Aurier effort hit the woodwork and Wolves failed to clear.

Henderson was regularly called into action to keep his side’s lead intact and made an impressive string of close-range saves to deny Raul Jimenez and Hwang Hee-chan before the break as Wolves piled pressure on the hosts.

They got their reward in the second half as Jimenez easily tapped home at the back post after substitute Matheus Cunha played a well-timed ball across the face of goal towards the Mexican.

Tempers frayed as the game neared the end of normal time, as Wolves had a penalty claim waved away after Matheus Nunes appeared to be tripped in the box, with Aurier, Daniel Podence, Nunes and Wolves manager Julen Lopetegui all booked for their reactions.

Despite their dominance with 66% of the possession, Lopetegui’s men failed to find a way to win the game in the 90 minutes and penalty misses from Neves and Hodge in the shootout condemned them to defeat.