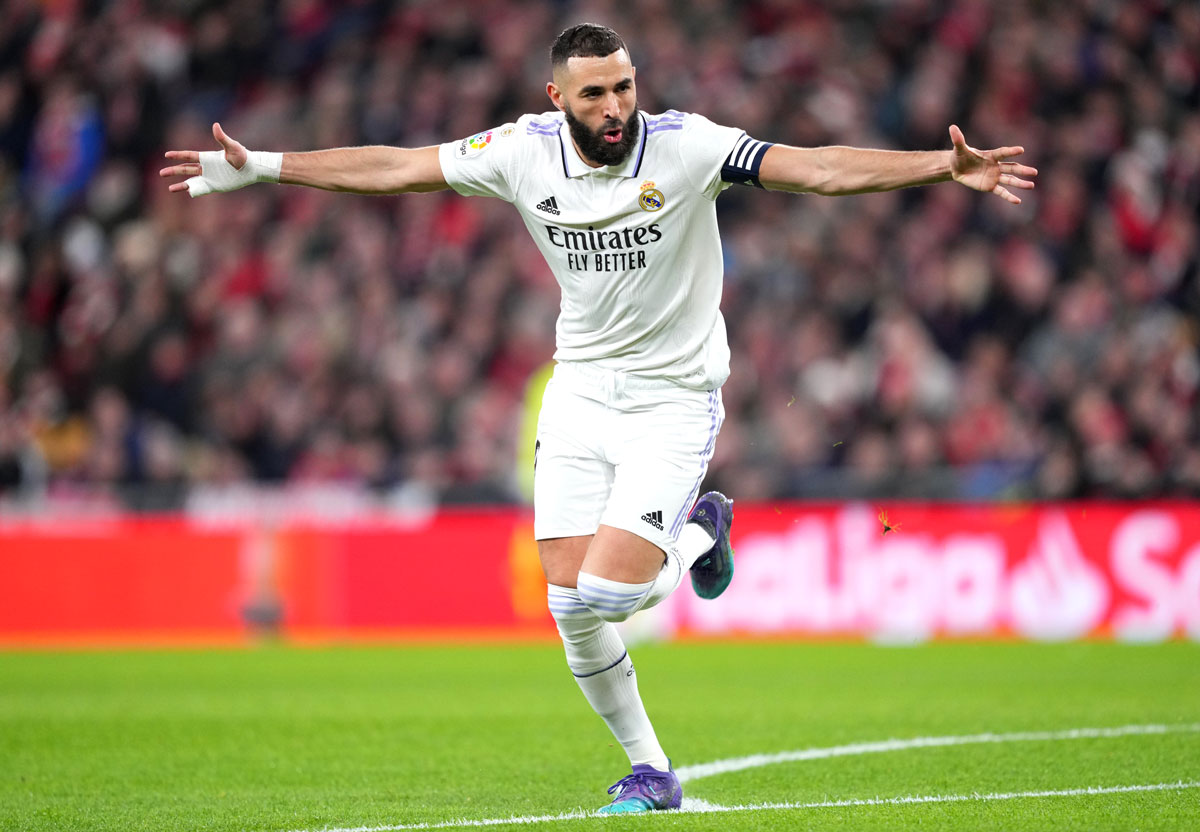 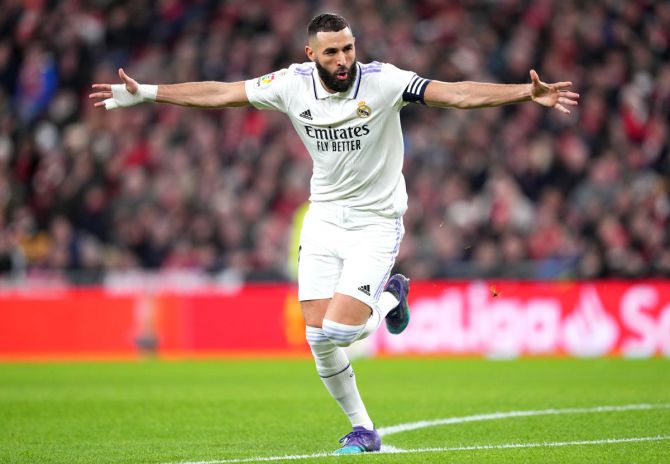 Champions Real Madrid earned a 2-0 win in a feisty LaLiga encounter at Athletic Bilbao on Sunday to ensure they stayed in the hunt for the LaLiga title with leaders Barcelona.

Barca moved to 44 points in the standings after their 1-0 win over Getafe earlier on Sunday. They are three points ahead of Real and six points in front of third-placed Real Sociedad. Bilbao are eighth with 26 points.

Real Madrid, beaten by Villarreal in their last league outing, secured the points thanks to a first-half goal from Karim Benzema and a strike from Toni Kroos in added time.

After a frantic come-from-behind 3-2 win in the Copa del Rey in midweek, coach Carlo Ancelotti decided to rest veterans Luka Modric and Toni Kroos and give an opportunity to midfielder Dani Ceballos, who was instrumental in his team’s triumph.

Alongside youngster Eduardo Camavinga, who also played a superb match, Ceballos started the play that ended with Benzema’s brilliant finish.

In the 23rd minute, he passed to Federico Valverde in the right channel, who crossed to Marco Asensio whose towering header fell into Benzema’s path and the Frenchman quickly fired a left-footed volley into the left corner.

“Today it was evident that our team were back at defending well,” Ancelotti told DAZN.

“We were solid and compact like we used to be and it’s important for us to keep that same mentality and attitude going forward.

“Ceballos played very well throughout the game, showed personality with the ball, well positioned without the ball.

“He hasn’t played much but it’s a moment of the season that we need everyone to show up like he is doing.”

Asensio, Vinicius Jr and Valverde missed good chances to extend Real’s lead in the second half.

Williams wasted a golden opportunity to equalise in the 69th minute when a series of mistakes by Real’s defence gifted him the ball inside the box, but he missed the target with a poorly executed shot in front of an empty goal.

His brother, Inaki Williams, had a goal ruled out a few minutes later for an offside in the build-up that left Athletic’s players and staff seething.

After Athletic and Real Madrid both squandered numerous chances to score, the visitors extended their lead in the 91st minute when Rodrygo found substitute Kroos who slotted in a powerful low strike from the edge of the box just inside the left post.

Pedri on target to earn Barcelona win over Getafe Barcelona extended their lead over Real Madrid in the LaLiga standings after Pedri’s first-half strike earned them a 1-0 win over Getafe on Sunday.

Leaders Barca climbed to 44 points, six ahead of their bitter rivals Real who have a game in hand and will visit Athletic Bilbao later on Sunday. Getafe are 16th and level with Celta Vigo and 18th-placed Real Valladolid on 17 points, just above the relegation zone thanks to a superior goal difference.

Coach Xavi Hernandez made several changes to his regular team, resting key players such as Robert Lewandowski, Ronald Araujo and Frenkie de Jong ahead to their Copa del Rey quarter-final clash against Real Sociedad on Wednesday.

Pedri opened the scoring in the 34th minute when he latched onto a pass from Raphinha and tapped into an empty net.

With almost 70% of ball possession, Barcelona were dominant in every aspect of the game but did not create many clear opportunities to extend their lead, with only four shots on target the entire match.

After a first half in which Ansu Fati wasted a couple of chances before Pedri’s goal, Barcelona came back from the break at a slower pace and seamed content with their advantage as Getafe failed to mount a serious threat.

“We were not great tonight, it was not our best game at home and we have to improve a lot, but we got the three points and that’s massive,” coach Xavi told Movistar Plus.

“We struggled against an opponent who played with a low block with five-man on defence. It was an important victory in which we did not give our best version.” Juventus put aside their off-field troubles to rescue a 3-3 draw with Atalanta in Serie A on Sunday.

Massimiliano Allegri’s side were playing their first match since being docked 15 points on Friday by an Italian soccer court investigating the club’s transfer dealings, leaving the former third-placed club marooned in mid-table.

Sunday’s result left Juventus in ninth place with 23 points, while Atalanta are fifth with 35 points.

“We have to keep doing our work, which is on the pitch. We must thank the players for what they did this evening, because I realise it is psychologically damaging to see yourself go from second or third place into 10th, it feels like having what you achieved taken away,” Allegri said to DAZN.

“The players and the staff who worked around them are to be congratulated.”

Atalanta started the match strongly, having scored 13 goals in their last two games in all competitions, and severely tested the Juventus defence.

“If you come to Turin just to defend, you will probably lose on a penalty or free kick. I always believe you need to score goals in these games or you don’t get a result,” Atalanta coach Gian Piero Gasperini said to DAZN.

Atalanta took the lead after five minutes when forward Ademola Lookman managed to get to the edge of the box, where his shot from an acute angle beat Juventus goalkeeper Wojciech Szczesny.

The hosts equalised in the 25th minute when Angel Di Maria converted a penalty given for a foul on Nicolo Fagioli by Ederson. Arkadiusz Milik completed the comeback with a volley inside the box from Fagioli’s cross less than 10 minutes later.

Atalanta needed eight minutes of the second half to retake the lead, with Joakim Maehle equalising 35 seconds after the restart before Lookman headed in his second of the night in the 53rd minute.

Danilo equalised for Juventus in the 65th minute with a well-placed low free kick.