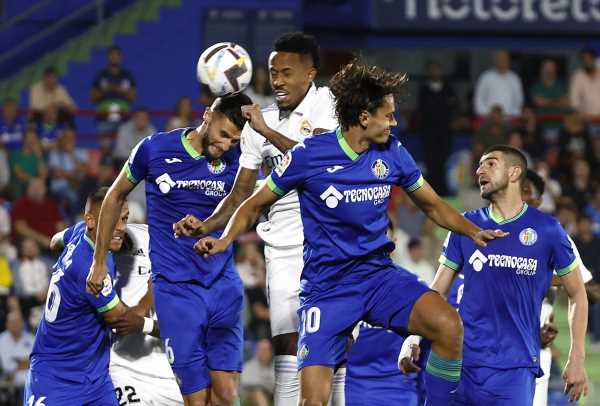 A summary of Saturday’s action in LaLiga, Ligue 1, Serie A and the Bundesliga.

Defender Eder Militao’s early header gave Real Madrid a low-key 1-0 win at Getafe on Saturday to move them back up to the top of the LaLiga standings.

Militao scored the winner in the third minute, ghosting between several defenders to head home from close-range from a corner by Luka Modric.

Yet despite their early breakthrough and a dominant performance, Real were unable to break down Getafe’s defensive wall and extend their lead.

Playing at Getafe has often caused trouble for Real, who were winless in their two previous visits to the Coliseum Alfonso Perez, having failed to score in both matches.

Real, who bounced back from dropping their first points of the campaign in a disappointing home draw against Osasuna last weekend, moved on to 22 points, three ahead of rivals Barcelona who have a game in hand and will host Celta Vigo on Sunday.

“Our goal today was to win and keep the pressure now over Barcelona,” Real Madrid defender Dani Carvajal told Movistar Plus.

“We always want to score more, but the good thing today was our effort in defence.Re

“To not concede a goal was really important and helped us to get to the objective that was get back to winning ways.”

After conceding a goal in each of his first seven starts for Real Madrid, goalkeeper Andriy Lunin kept his first clean-sheet for the Spanish giants.

“I think we controlled the game well from the beginning and were really close to securing the points with a second goal,” coach Carlo Ancelotti said.

“We were not good in front of the goal, missed many chances. We could have scored more, we had plenty of opportunities.”

After the early goal, Real piled on the pressure.

Rodrygo, who played centre forward in place of Karim Benzema, who was rested by Ancelotti ahead of next weekend’s El Clasico against Barcelona, was the focal point of Real Madrid’s attack.

He missed a great chance with a close-range header and Modric, who was returning after missing two games with a hip injury he suffered on international duty with Croatia, fired a bullet-shot wide from the edge of the box.

Real Madrid were also denied a penalty just before the break, when Vinicius Jr was fouled inside the box but a VAR check spotted that the ball had gone out on the left touchline in the build-up.

Rodrygo shot wide immediately after the break and, two minutes later, Getafe goalkeeper David Soria made an incredible stop to deny a bullet-strike from Aurelien Tchouameni from inside the box.

The Brazilian had a goal ruled out a few minutes later after the VAR decided he was narrowly offside.

The pace of the game dropped as Real controlled possession and a helpless Getafe defended with 11 men in their own half.

Getafe have lost two straight games and are 16th on seven points, two above the relegation zone. 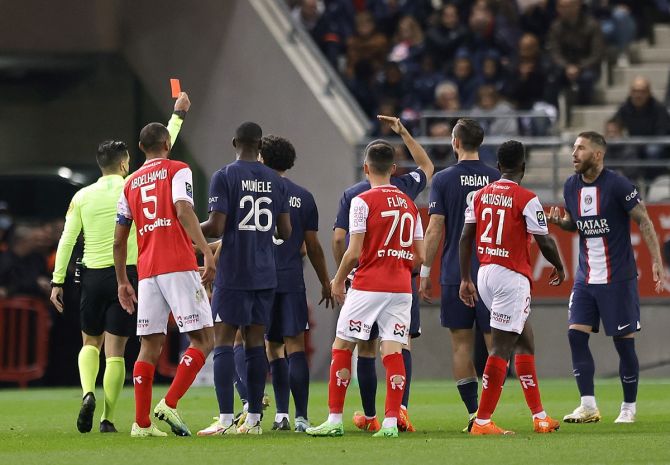 Ligue 1 leaders Paris St Germain played more than one half with 10 men but salvaged a goalless draw at Stade de Reims on Saturday to extend their unbeaten run this season.

Sergio Ramos picked up a straight red card as tempers flared shortly before halftime but a reshuffled PSG, in the absence of the injured Lionel Messi, managed to keep a clean sheet.

They have 26 points from 10 games and lead Olympique de Marseille, who slumped to a 2-1 home defeat by AC Ajaccio, by three points.

Reims are 14th on eight points.

The hosts played boldly but PSG had the best chance through Mbappe, who was denied from close range by Yehvann Diouf in the 33rd minute.

Ramos, however, picked up a yellow card after arguing with referee Pierre Gaillouste, who an instant later went back to the Spaniard and handed him a straight red card.

Coach Christophe Galtier replaced midfielder Carlos Soler with Neymar as PSG pushed for the win but the visitors lacked ideas and had to be content with sharing the points on a night to forget.

Earlier, Marseille’s second place was under threat on Saturday as they were outfoxed by promoted Ajaccio.

Dimitri Payet’s 100th league goal meant little in the end as it was quickly followed by Bevic Moussiti-Oko’s equaliser and Leonardi Balerdi’s own goal.

Third-placed Lorient will leapfrog them into second place if they beat Brest and fourth-placed RC Lens will also move ahead if they grab all three points in the northern derby at Lille on Sunday.

At the Stade Velodrome, Payet opened the scoring with a spot kick after a Cedric Avinel handball in the 15th minute.

The visitors went ahead two minutes into the second half when Balerdi deflected Youssouf Kone’s cross into his own net and Marseille’s only clear chance then came in the 55th minute when Oumar Gonzalez almost scored an own goal, too.

Milan ease to victory over Juventus 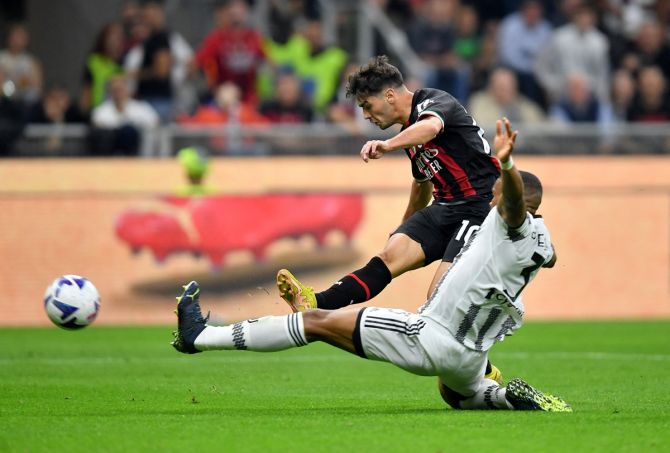 AC Milan secured a 2-0 win over struggling rivals Juventus with goals from defender Fikayo Tomori and midfielder Brahim Diaz in a spirited Serie A clash at the San.

Defending champions Milan provisionally moved up two places to third in the standings on 20 points, level with leaders Napoli and second-placed Atalanta who both have a game in hand.

Juventus, who appeared to have turned a corner after beating Bologna 3-0 at home last weekend, following that up with a 3-1 victory against Maccabi Haifa in the Champions League in midweek, remain eighth on 13 points.

Milan were determined to make up for Wednesday’s 3-0 defeat to Chelsea in the Champions League and forward Rafael Leao was close to opening the scoring in the 20th minute with a back heel following a corner, but the ball bounced off the post.

Another shot by the Portugal forward from outside of the box hit the post less than 15 minutes later.

But Milan eventually made it 1-0 just before the break through Tomori who followed up a shot by Olivier Giroud and rifled the ball into the roof of the net.

Leao continued to threaten Wojciech Szczesny’s goal after halftime, trying his luck with a long-range shot which went just over the bar in the 53rd minute.

But Diaz doubled Milan’s lead one minute later when he took advantage of Dusan Vlahovic’s mistake and raced towards Juve’s goal, finishing off a solo effort with a brilliant strike.

Juventus looked sharper in attack in the closing 20 minutes, with striker Arkadiusz Milik and substitute forward Moise Kean both going close with chances.

However, Juve’s away form continues to trouble coach Massimiliano Allegri, whose side last won on the road in late April.

They have only picked up two points in four Serie A away matches this season and face a testing trip to Maccabi Haifa in midweek.

Both sides return to Champions League action on Tuesday before Juventus travel to Torino for the derby next Saturday, while Milan visit Verona on Sunday. 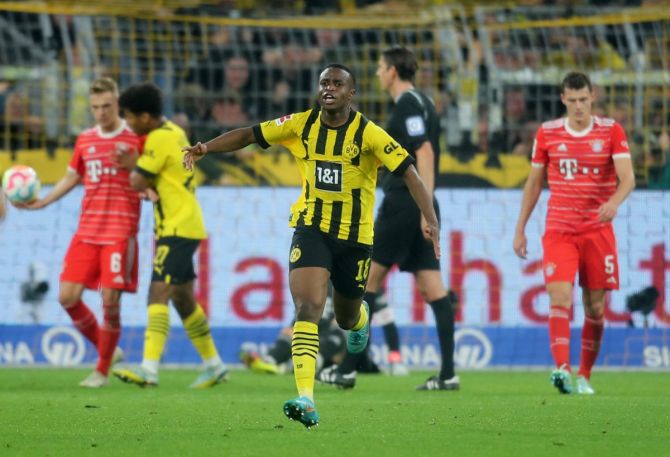 Borussia Dortmund’s Anthony Modeste headed in a last-gasp equaliser to complete a sensational two-goal comeback and snatch a 2-2 draw against visitors Bayern Munich in the Bundesliga’s Der Klassiker on Saturday.

The 34-year-old Modeste, who had faced massive criticism after netting just once in the league following his arrival this season, headed in at the far post with the last touch of the game after also setting up their first goal, to rescue a point and keep Bayern off top spot.

He also snapped Dortmund’s eight-game losing run to Bayern in all competitions as the Bavarians ended the match with 10 men after Kingsley Coman was sent off in the 90th minute for a second booking.

Bayern, who face Viktoria Plzen in the Champions League on Wednesday, are on 16 points as many as Dortmund, with Union Berlin and Freiburg, both on 17, in action on Sunday.

“Had we scored that third goal then the game would have been over,” Bayern coach Julian Nagelsmann said.

“But then we concede a goal out of a not so dangerous situation. We definitely should have defended better. The last two or three minutes, with a player less, it was an open game.”

“It is frustrating for us but that’s the way it is. Overall it’s a fair result.”

Goretzka threaded a low shot through a crowded box to open the scoring with Bayern’s first chance of the game in a high-intensity encounter in front of a sold-out 81,000 crowd at the Signal Iduna Park in Dortmund.

Dortmund, who host Sevilla in the Champions League on Tuesday, were equally aggressive but also had only few shots on target in the entire first half, including a clever Raphael Guerreiro effort that tested keeper Manuel Neuer.

The visitors shot out of the blocks after the break and Sadio Mane should have done better with a diving header in front of an empty goal from close range in the 49th.

Leroy Sane quickly made amends in the 53rd for his team mate’s miss, unleashing a fierce shot with Dortmund keeper Alexander Meyer getting a hand on the ball but unable to turn it wide.

With Bayern thinking they had done enough to win, 17-year-old Youssoufa Moukoko set up a dramatic finale when he picked up a Modeste pass to beat keeper Neuer and become the youngest scorer in the history of Der Klassiker.

Neuer managed to claw away a Modeste effort on the line in the 83rd but was beaten when the French striker headed in deep in stoppage time.