Images from Day 8 of the FINA World Championships at Duna Arena in Budapest, Hungary, on Saturday.

American Justin Ress won gold in the 50m backstroke in dramatic circumstances at the World Championships in Budapest on Saturday after officials overturned his initial disqualification following a lengthy review.

Victory was earlier awarded to compatriot Hunter Armstrong after it was ruled that no part of Ress’s body was above the water as he reached first for the wall.

Ress, who had set the pace in the heats and the semi-finals, was later reinstated as the winner and the medal ceremony held again, with Armstrong taking silver and Polish teenager Ksawery Masiuk having to settle for bronze. 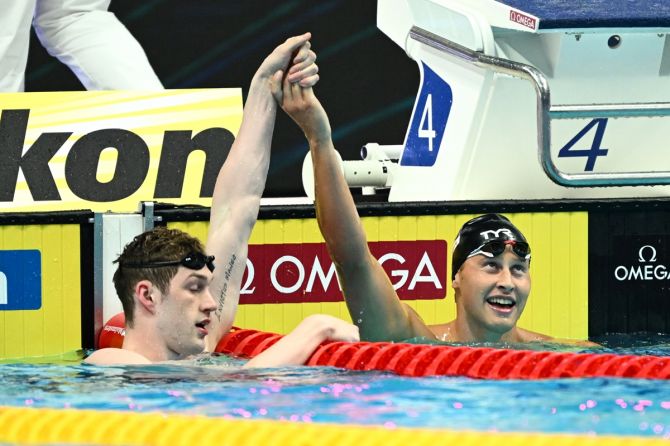 “It’s really cool to race someone like Katie as she is around my age and she’s a really tough competitor,” said McIntosh. “So I’m looking forward to racing her and keep pushing myself.”

Gregorio Paltrinieri, gold medallist at the Rio Olympics, set a new championship record in the 1,500m freestyle, comfortably finishing ahead of Robert Finke and Florian Wellbrock in a time of 14:32.80.

The Italian looked on course to break Sun Yang’s world record of 14:31.02 but faded in the last 100 metres. “So many people thought I was finished. I am not a person who lets himself be influenced by others but in these days I had enough doubts,” Paltrinieri, 27, told reporters.

“Then I said ‘no’ and I felt stronger but I had to prove it in the race… I was in lane one, I felt the whole arena on me, but I didn’t think so much. And time was not the priority today – today I dived in with the will to win.” Swede Sarah Sjostrom added the 50m freestyle crown to her remarkable list of victories as she claimed a 19th individual medal at the World Championships, edging out Katarzyna Wasick and Meg Harris.

In the team events, Italy prevailed over the US by 0.28 seconds in the men’s 4x100m medley relay while Britain were almost four seconds back in third.

The Americans, however, came out on top in the women’s event as the quartet of Regan Smith, Lilly King, Torri Huske and Claire Curzan proved too strong for silver medallists Australia and third-placed Canada.

“We take a lot of pride in that relay and really wanted to put in a good time and get that gold back from last summer (Olympic Games). We came out and did that, and it was a great race,” said Curzan, who anchored the US home.

Lithuanian Meilutyte was handed a 24-month suspension in 2019 for anti-doping violations and returned to competitive action only in December last year.