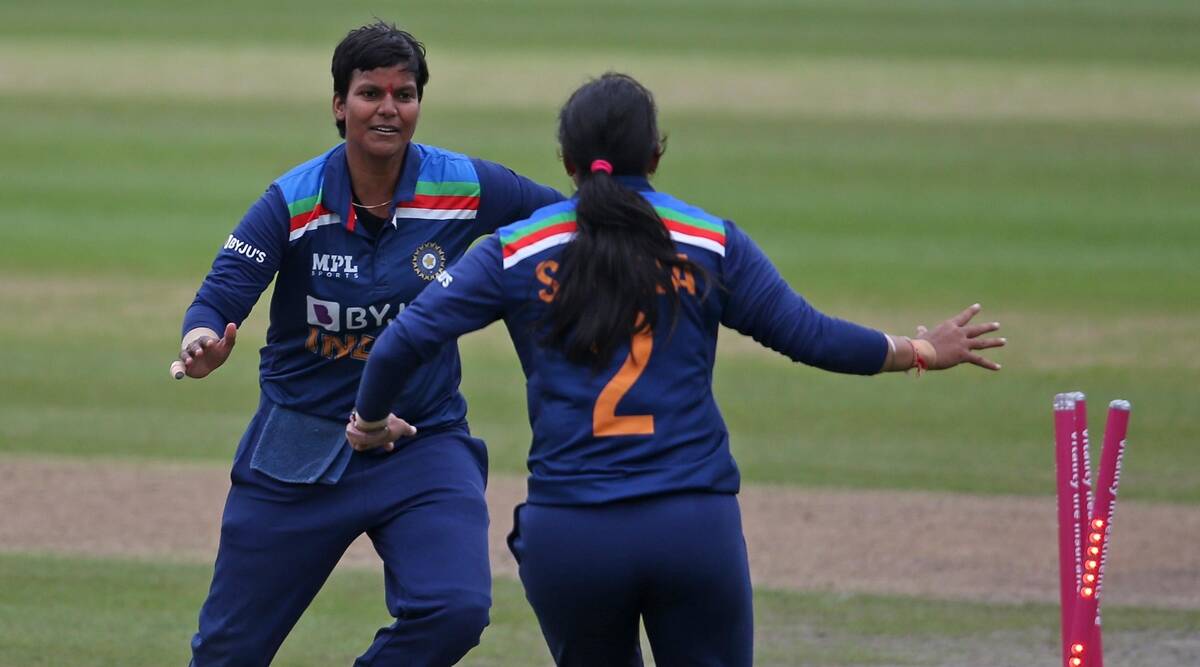 England, who needed 33 runs off 30 balls with six wickets in hand, crumbled under the pressure generated by India spinners who were complemented well by their fielders. The spin duo of Poonam Yadav and Deepti Sharma scripted India’s dramatic comeback with tidy death over spells that helped the visitors level the series with an eight-run win over England in the second women’s T20 here on Sunday.

England, who needed 33 runs off 30 balls with six wickets in hand, crumbled under the pressure generated by Indian spinners who were complemented well by their fielders.

Shafali Verma’s 48 off 38 balls had allowed India to post 148 for four after being put in to bat.

Offie Sneh Rana defended 14 runs in the final over to cap off an impressive bowling effort from the spinners.

Leggie Poonam ended with figures of two for 17 in four overs and Deepti one for 18 in four overs. The England innings saw India effecting four run outs.

The series decider will be played on Wednesday.

England were in the driver’s seat for the major part of the chase and had reached 52 for two in the first six overs despite losing Danielle Wyatt and the in-form Nat Sciver cheaply.

Sciver was run out in a rather interesting fashion as wicketkeeper Richa Ghosh ran back to effect a direct hit after failing to collect a widish delivery.

In contrast to India’s innings, the loss of early wickets did not affect the innings’ tempo as England batters kept getting the boundaries.

Indian pacers Shikha Pandey and Arundhati Reddy were wayward and offered Beaumont way too many short balls which she duly dispatched through the cover and backward point region.

England were cruising with Tammy Beaumont (59) and skipper Heather Knight (30) in the middle but after they were dismissed off successive balls in the 14th over bowled by Deepti Sharma, it made the task a lot tougher for the hosts who still needed 43 off the last 36 balls.

India then tightened the noose on a self-destructing opposition.

Earlier, India could not capitalise on a blazing start provided by Shafali.

A flurry of boundaries from Shafali helped India race to 47 for no loss in four overs.

The 17-year-old produced the kind of hitting she is known for. She slog swept left-arm spinner Sophie Ecclestone for a four and six before smashing pacer Katherine Brunt for as many as five boundaries in a row.

Brunt, who had dismissed Shafali in the first T20, had no answer to the disdainful hitting from the Indian, whose five boundaries including a slap past the bowler and three in the cow corner.

Ecclestone bounced back strongly in her following over, bowling a maiden and dropping a tough return catch of Shafali.

The more experienced Smriti Mandhana (20 off 16) was happy being a spectator a the other end.

However, the game changed after the fall of Shafali and Mandhana in a space of three balls.

An out of form Harmanpreet (31 off 25), who promoted herself to number three, and Deepti Sharma (24 off 27) found it tough to maintain the scoring rate.

The India skipper finally got a release with a heave over deep midwicket off spinner Mady Villiers after coming down the track.

The innings had lost the momentum created by the openers with India reaching 102 for two in 15 overs.

Running out of time, Harmanpreet deposited leggie Sarah Glenn for a four and six in the 16th over before falling to a brilliant running catch by Brunt from long off.

A few much needed boundaries from Deepti and Sneh Rana got India close to the 150-run mark. India collected 46 runs from the last five overs.