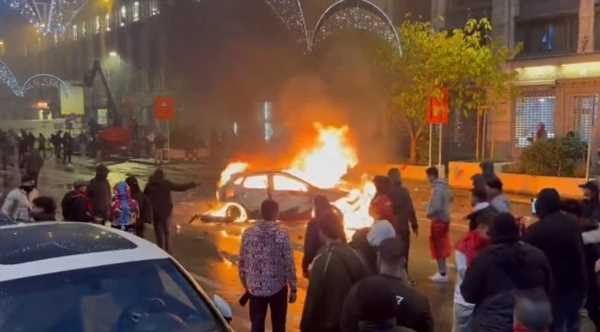 Riots broke out on the streets of Belgium’s capital Brussels following Morocco’s 2-0 World Cup win over Belgium in Qatar.

Worrying scenes emerged from the city centre, with furious supporters shouting through the streets setting fire to scooters, setting off fireworks, and even flipping a car onto its roof.

Police used water cannon and teargas after coming under attack from football supporters who brought havoc.

Even before the end of the match, ‘dozens of people, including some wearing hoodies, sought confrontation with the police, which compromised public safety,’ Brussels police said in a statement.

‘I condemn in the strongest terms the incidents of this afternoon. The police have already firmly intervened. I therefore advise against fans coming to the city centre. The police are doing all they can to maintain public order,’ tweeted the mayor of Brussels, Philippe Close.