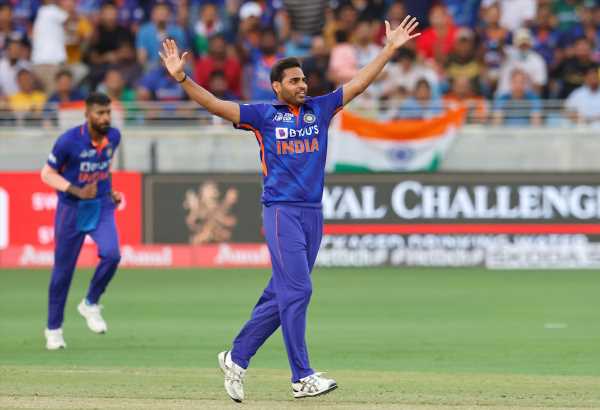 ‘Bhuvi has been playing for us for so many years…’

Successive defeats by Pakistan and Sri Lanka have left India on the brink of exiting the Asia Cup but captain Rohit Sharma is not concerned about their form ahead of next month’s T20 World Cup.

Sri Lanka defeated defending champions India by six wickets with a ball to spare in a Super Four match on Tuesday at the continental T20 tournament, which is being held in the United Arab Emirates.

Pacer Bhuvneshwar Kumar leaked 30 runs in 4 overs while Arshdeep Singh conceded 40 runs in 3.5 overs against Sri Lanka. Earlier, Bhuvneshwar leaked 19 runs in the 19th over which paved the way for Pakistan to defeat Team India in their Super 4 opener at the Asia Cup.

Questioned on Bhuvneshwar Kumar’s disappointing performances in death overs in two straight games, Indian skipper Rohit Sharma said that the team is not worried about it.

‘Even experienced bowlers go for runs. Bhuvi has been playing for us for so many years and has won us so many matches in death overs,’ he added.

The skipper said that this present team is 90-95 per cent team set to play T20 World Cup in Australia and few changes will occur later.

‘We wanted to try out certain things. Before Asia Cup, we had four seamers, two spinners and one of them being an all-rounder. I always wanted to try and find out what happens when you play three seamers and two spinners and one seamer is an all-rounder. When you play with quality, you want to challenge yourself. The fourth seamer was not available, as he was sick,’ he said.

‘We have the sixth bowling option but we want to try the combination of the fifth bowler. When we go to World Cup then we would like to go with six bowlers. We have played a lot of matches with six bowlers,’ he concluded.

Rohit said that presently nothing is lacking in the team but it becomes challenging to play in big tournaments since more opponents play against them with different plans.

He rubbished the talks of bowlers being demoralised and said that they are confident.

On the atmosphere in the dressing room, he said, ‘When you lose a lot of questions are raised. All the boys are relaxed or chilled. We have created the atmosphere of dressing in a way that it remains the same whether it is a win or a loss.