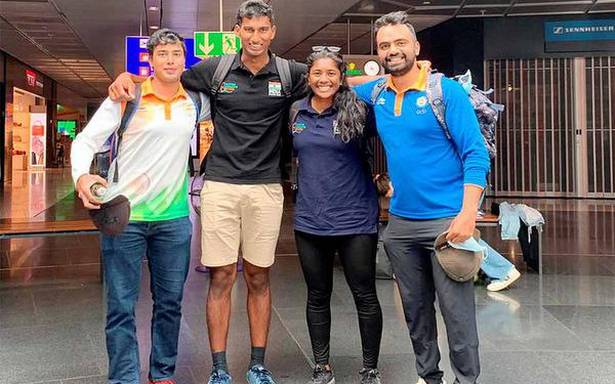 Having already scripted history, Nethra, Vishnu and Varun-Ganapathy are striving to make it a memorable Games

For the first time in the history of Indian sailing at the Olympics, four sailors have qualified in three categories: laser radial (women), laser standard (men) and 49er (men).

The four competitors — Nethra Kumanan (radial), Vishnu Saravanan (standard), and the pair of Varun Thakkar and K.C. Ganapathy (49er) — booked their Olympic spots at the Mussanah Open championships in Oman in April.

All of them have had sufficient practice at their respective training bases in Spain (Nethra), Malta (Vishnu) and Portugal (Varun-Ganapathy).

The 23-year-old Nethra, ranked a career-best No. 54, will definitely have it tough in Tokyo.

There are some wonderful sailors in the radial class. Leading the list of favourites is the Netherlands’ Marit Bouwmeester, who won gold at Rio 2016 and silver at London 2012. World No. 1 Emma Plasschaert (Belgium) and the silver and bronze medallists at Rio, Annalise Murphy (Ireland) and Anne-Marie Rindom (Denmark), will fancy their chances as well.

Nethra will be realistic about her expectations. As her coach Tamas Eszes said in April, “We expect her to finish in the top 20 [among 44 competitors] at Tokyo.”

Vishnu, too, is a fighter, as was evident from the manner in which he raced the final round of the Asian Olympic qualifier in Oman, winning it to finish second overall.

The return of 48-year-old Brazilian Robert Scheidt, a veteran of five Olympic medals (including two gold), will be watched with interest.

In a competitive 35-boat field, Vishnu, ranked No. 43, will want to do everything in his control to make it a memorable Games.

The 49er will have a galaxy of top stars, including Rio gold medallists Peter Burling and Blair Tuke (New Zealand), the World No. 1 duo of Bart Lambriex and Pim Van Vugt (the Netherlands) and the pair of Erik Heil and Thomas Ploessel (Germany), who finished third in Rio.

Ranked 73 in the world, the Varun-Ganapathy duo, bronze medallists at the 2018 Asian Games, will hope to finish in the top 10.