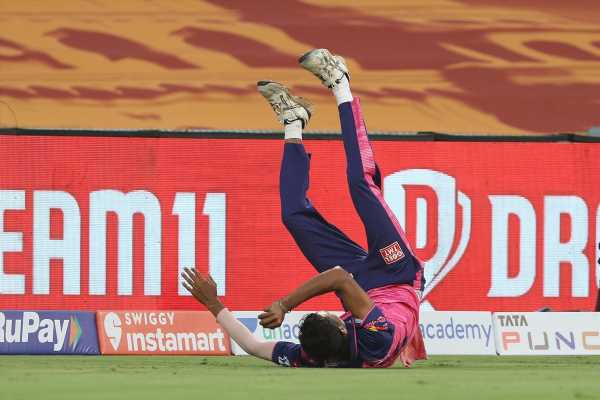 Rajasthan Royals’s IPL 2022 campaign got off to a perfect start after they won their first two matches.

On Saturday, April 2, 2022, the Royals got the better of the Mumbai Indians by 23 runs at the D Y Patil stadium in Navi Mumbai. The breakthrough came for the Royals on the last ball of the 13th over when Trent Boult broke the 71-run stand between Varma and Kishan. But it would not have been possible without Saini’s brilliant effort.

Ishan struck the ball flat towards deep square leg. Saini had some ground to cover and he ended up taking a sensational catch.

The pacer could not balance himself and landed badly on his head. He lay there flat without any reaction for a while and was assisted off the field thereafter.

His superlative effort brought about the end of Ishan’s 54-run innings. Pacer Kuldip Yadav warmed up in case he had to come on as a concussion substitute, but Saini was able to carry on.

Despite suffering a blow to his head, Saini bowled the final over of the innings with 28 to defend and did a magnificent job. The 29 year old started with two wides and conceded a four, but bowled right in the block hole when it mattered, with the field packed on the offside.

Kieron Pollard could not connect a big one and in the end, perished off the last ball to hand a 23 run victory to the Rajasthan Royals. Saini finished with 2 for 36 in three overs and was impressive overall in the field as well.

But that catch, in the end, turned out to be decisive. Had Saini not caught Ishan the Sledgehammer, the result could have been very different.