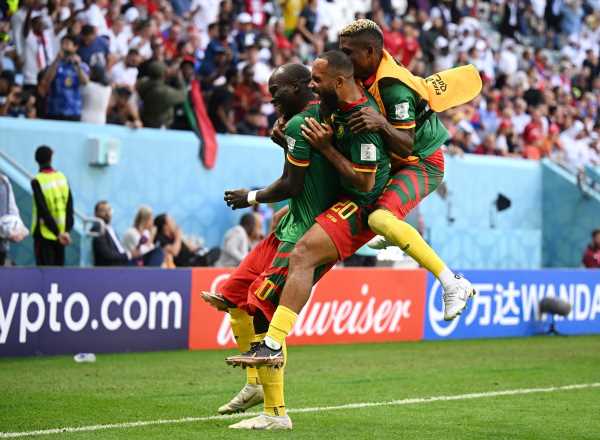 ‘In these competitions you have to show desire for victory’

Serbia coach Dragan Stojkovic had said his side would approach their World Cup Group G fixture against Cameroon with a view to “taming” the Indomitable Lions, but veteran striker Vincent Aboubakar had other ideas.

With both Serbia and Cameroon desperate for points after their opening defeats, they played out one of the most entertaining games of the tournament, attacking at every opportunity and refusing to sit back.

In the end, a 3-3 draw was probably a fair result in a game where the pendulum swung back and forth as the teams exchanged leads, and it was the introduction of Aboubakar for Cameroon that proved crucial for his side.

Facing the ignominy of equalling the record for nine consecutive defeats in World Cup tournaments, Aboubakar’s goal and assist – less than three minutes apart – kept the African side alive in the tournament ahead of Brazil’s match with Switzerland.

“In these competitions you have to show desire for victory,” Aboubakar said.

“My team mates had a great first half despite some small mistakes. We felt they were shaky and bit tired. When I came on, I tried to make the most of it.”

Samuel Eto’o was the last player to score a winner for Cameroon at the World Cup 20 years ago, and the president of the country’s football federation had waited outside the team hotel to embrace the squad before their trip to the stadium.

Some of his magic seemed to have rubbed off on the players as Jean-Charles Castelletto opened the scoring to give Cameroon their first goal at the World Cup in eight years.

But Stojkovic’s side quickly took back control with three goals either side of halftime to break Cameroonian hearts in the stands while the Serbian contingent were in full voice.

Cameroon coach Rigobert Song cut a frustrated figure on the touchline and when he saw the single-striker formation failing to yield results, he decided to go for broke, throwing Aboubakar into the mix.

Once a teenager who played for Cameroon at the 2010 World Cup, the 30-year-old is now the on-field leader of the African side, providing calmness on the pitch and a touch of class.

With Aboubakar playing off the shoulder of the offside trap the impact was almost instantaneous, as Serbia’s defence — as well as the linesman — simply failed to spot his well-timed runs.

A glorious finish for Cameroon’s second goal when he found acres of space before chipping the keeper was almost cruelly ruled out when the linesman raised his flag, before VAR intervened to confirm the goal.

The Serbians were shell-shocked and before they could recover, Aboubakar delivered the sucker punch.

His run for the equaliser was almost a carbon copy of his goal as he broke through the lines again to go deep into enemy territory before whipping in a cross for an easy tap-in for Choupo-Moting as Cameroon completed an improbable comeback.

Even off the ball, Aboubakar was busy conducting play, arms raised and pointing at his free team mates, and giving the Cameroon fans in green, red and yellow something to roar about with the rapid two-goal salvo.

“The most important is to give the Cameroon people emotions. What matters is the mindset and the collective spirit, and in that regard we played a great game,” Aboubakar said.

The result ensures Cameroon are not eliminated yet, no matter what the result is between favourites Brazil and Switzerland later on Monday.