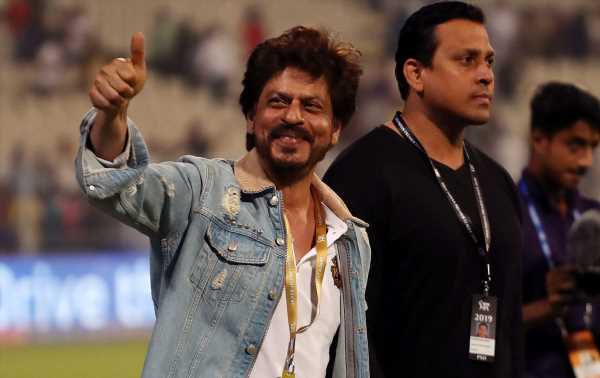 ‘Sometimes we arrange a Zoom call just for him to say hello to the players, that’s about it.’
‘But otherwise, no, no direct talk, it’s never happened, even in a normal year.’
‘After the game, you win, you lose, SRK is there to encourage the team, give them hugs.’

Kolkata Knight Riders are going through a rough patch in IPL 2022, having won only three of their nine games.

In the third and final part of an exclusive interview with Harish Kotian/Rediff.com, KKR CEO and MD Venky Mysore reveals how KKR made a sensational comeback in the second leg of IPL 2021 in the UAE, winning nine matches in a row to reach the final and how the Knight Riders brand is spreading around the world with teams in four different T20 leagues.

Last year, KKR struggled in the first leg of IPL in India losing five of their first seven games, but bounced back in UAE later in the year, winning all nine of their matches to reach the final. What made the superb comeback possible?

A lot of people have asked me this. Honestly, maybe the break came at the right time for us in the first half because we were playing good cricket, but we were not getting the results that we wanted.

And when the break came in, everybody was probably able to regroup and figure out things. And during that time something interesting happened, some of our players like Nitish Rana, Varun Chakravarthy, Sandeep Warrier, Prasidh Krishna, all of these guys were picked for the Indian team.

This was a recognition of their talent and that put them in a tremendous frame of mind. It was very positive for them from this perspective.

Secondly, if you see one of the highlights of the second of IPL 2021 was the bowling of Sunil Narine. He was absolutely amazing and almost unplayable.

Several opposition players mentioned that. Shreyas Iyer, who was playing for Delhi last season, he said Sunil Narine was almost unplayable. That was one big plus.

You also have to give credit to Brendon McCullum and the coaching staff in giving Venkatesh Iyer an opportunity to open the innings. He provided us a different type of spark with his aggressive batting.

And finally, when we got together there in the UAE, one of the conversations I was having with everybody was — I usually don’t speak too much to the team, but I told them — ‘Listen, we have an option, here we are at the bottom of the table. Now if you look at this as a continuation of the first half of the tournament, all those memories will keep coming back.’

I told them to put all those things behind us and take a fresh view of it, work on the basis that it is a new season. So I think everyone took that to heart and really accepted that approach in their minds, not because I said it.

They were all in a good frame of mind. Although Andre Russell unfortunately got injured towards the end of the tournament, but his bowling in the first three-four games, he took wickets and he took big wickets.

Then we won the first play-off, we won the second play-off, and we go to the final, we almost won the final. But what happened unfortunately, as I said, a little bit of luck. Rahul Tripathi, who had done so well for us while fielding, got injured. So the combination of those things is what led to the kind of performances that we had.

I am very, very, proud of how the team turned things around in the UAE. 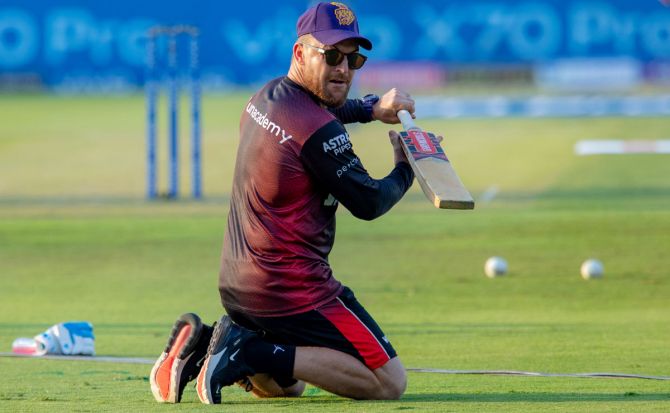 How do you rate Brendon McCullum’S coaching style? He has changed the way KKR play, the team is much more aggressive just like McCullum was during his playing days. He deserves a lot of credit for KKR’s turnaround with his positive approach.

Brendon has been terrific. It is one thing to say that it is his style of play and therefore, he is trying to use that as a coaching style.

But I actually think it’s also a lot to do with the kind of relationships that he has built with the players and the kind of freedom that he gives them. He is not saying, ‘Go and play like me’, on the contrary, he says, ‘Don’t play like me because I had my own style and you have your own style. You had to play in the style what works for you.’

But for that you need the freedom to play and the kinds of players that we have picked. You can’t go to a very steady defensive type of player and say, ‘I want you to start hitting sixes.’ It doesn’t work that way.

So the type of players that we have picked and the squad that we have built, we have the skills to go out and play fearless, aggressive, cricket.

The question really is not so much about telling them how to play, because you can’t teach professional players how to play. And that will be foolish to try and do that. I think it is more about giving them the freedom to go out and play. It doesn’t matter if in the process you get out. You get out. I mean, who doesn’t get out? Every player gets out.

It is a matter of going out and, and enjoying yourself, having the freedom to play. So I think that’s what he has brought to the setup.

Is Gen Next taking over at KKR? We saw Janhvi Mehta along with Aryan and Suhana Khan at the auction. (Co-owner) Juhi Chawla has called them not just the future of KKR, but the present of the team.

I don’t know what you mean by taking over…

I mean, running the franchise…

No, they are not involved in running or anything. They are just enthusiastic, they are young kids, they want to have some fun.

Running a franchise is not a joke, and one needs to be very practical about it. But it’s nice to see that they are enthusiastic about it and getting involved, which is great.

And is Shah Rukh Khan going to make an appearance at a KKR game this season?

He would love to, but the films that we were trying to shoot and all that everything had to be put on hold (during the pandemic). Now that things have settled down, we are restarting that to make sure that we are able to complete the films. So, he is super busy because of that, but I am sure he will show up sooner or later.

Does he interact regularly with the players, coaching staff, maybe some kind informal sort of chat…

Not really. Fortunately, one of the reasons, I feel, and this is what others also say, that the success of KKR — and this is my 12th season — they (the owners) have given me full freedom and left it to me to run the show, as you said off the field.

My job is to make sure that you know when I hire coaches and when I put the support staff it’s not only about McCullum, but we have David Hussey, James Foster, Omkar Salvi, Bharat Arun, Abhishek Nayar and analysts Nathan Lehmann, A R Srikkanth, etc. All these are decisions I have made, to put this whole squad together.

Now, once I put them in position, I don’t interfere with them. I don’t tell them how to coach or how to go about team meetings.

But that is the plus point of KKR. The owners are completely hands off, they love the fact that the team does well. They send me some very encouraging, positive, messages.

The other day after we won against Mumbai Indians (on April 6), SRK was over the moon. He was completely thrilled. He never gets involved even if he is able to come. Anyways, the last two seasons we have been in the bubble, so they have not come in.

Sometimes we just arrange a Zoom call just for him to say hello to the players, that’s about it.

If at all, he was in Kolkata, coming to a game and he is in time he will come for a meeting, just sit in the background and just listen to what’s going on.

And after the game, you win, you lose, SRK is there to encourage the team, give them hugs.

I think this is one of the unique things about our team. We don’t have that type of interference or involvement or whatever. It is more about giving the support and saying, ‘Enjoy yourself, we are here to back you.’

KKR has invested in teams in overseas leagues like the Trinbago Knight Riders in the Caribbean Premier League. You have also taken a team in the South African T20 League, and also in the UAE.

The idea and the vision was always to turn KKR into a global brand and to play round the year under the Knight Riders brand.

You can see how this is a round-the-year business. The brand has become a 365-day brand. The fan base also a global fan base so that’s the thought process behind it.

From next year onwards, BCCI plans to start the women’s IPL. Will KKR be interested in forming a team?

KKR were the first ones to give the women’s league idea. I have been saying this for a long time that the IPL should be the first one to start a women’s IPL. I am glad there is finally talk about it and let’s hope they do it.

We will be completely supportive of it.