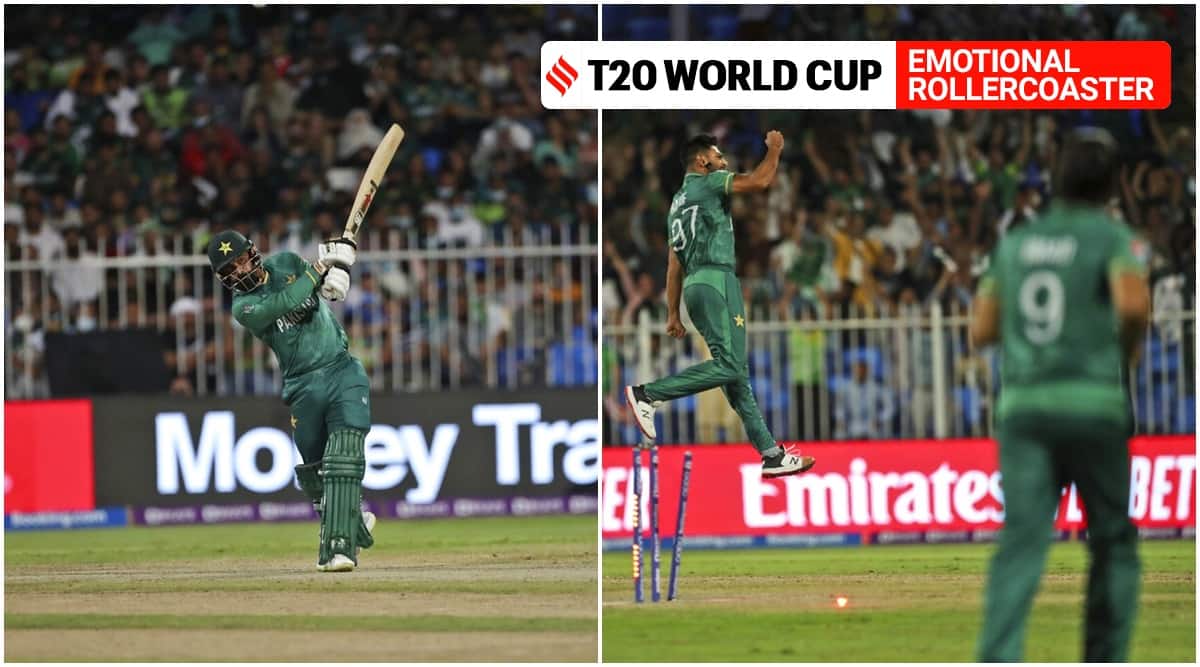 Who is the king of the first few overs in T20? Shaheen Shah Afridi must be the first bowler in the T20 world when it is batsmen who explode. Not getting any wickets seems to be a prized target and Afridi bowled a maiden to boot. Incredibly, Afridi is doing this in conditions which aren’t really known for extravagant swing. No other bowler has got the ball to curve as much as him either in IPL or in the World Cup till now. He had one ball dink away and got the rest to curve back into New Zealand’s Martin Guptill who paid utmost respect, tapping them away. Everyone knows what he is going to do but they haven’t come up with any answers yet. His unique flexible wrist snap seems to have the batsmen confused about the length, if not the direction itself. The world still awaits a batsman who dares to attack Afridi in the first over.

A day of ‘what if’ for Hafeez

At nearly 42, Mohammad Hafeez keeps popping up in Pakistan teams like an evergreen number every now and then. He has played for over 30 teams and has been in pressure-cooker situations innumerable times. With Pakistan two wickets down, captain Babar Azam and No.3 Fakhar Zaman gone, the next man needed to steady the ship. Hafeez walked in with a swagger. He wasted no time to get going. He dispatched the first ball he faced from Jimmy Neesham for a six, inside out and over extra cover. When bowling he had got Neesham on the first ball he had bowled. It seemed to be Hafeez’s day. That was till, in the next over, he came down the track and lofted left-arm spinner Mitchell Santner over long-on only for Devon Conway to pull off the catch of the tournament. It was a day of ‘what if’ for Hafeez who looked on in disbelief as he walked back.

Haris Rauf leaped and fist-pumped with joy during a phenomenal spell of four for 22 against New Zealand. Rauf’s best leap was when he dismissed Glenn Phillips, the muscular hard-hitter, with a slower ball which was caught in the deep. He reduced his pace when he got Devon Conway to hit skyward and into the hands of the fielder manning the ropes and a similar ball worked for Mitchell Santner. Opener Martin Guptill was beaten by a length ball. A genuine quick who touches speeds of 150 kmph, Rauf can also bowl the slower one with very little change in action or arm speed. It was only a couple of years ago that the 27-year-old moved away from being a tape-ball regular and caught the attention of scouts. Controlling emotions is not one of his strengths though. When Santner smashed him through the off side, he bent backwards, buried his hands in his face and stayed in that pose for a while, like a bowler who had had enough of getting hit. In reality, the thunderbolt – clocked at 149 kmph – was his first really bad ball of the day. The next delivery, the last of the innings, he cleaned up Santner and a mini leap followed.

Shoaib Malik is the reliable floater who can steer the finisher in this Pakistan batting line-up while hanging around and getting just the last batch of runs. Not too many, though. He can range the sous chef on preps and the second-in plater on the kitchen line. Just the tail of the comet that keeps them in business when chasing totals. On Tuesday, he would pull off another one in the company of Pakistan’s assigned finisher Asif Ali who walked away with the glory of a 12 ball-27 at a strike-rate above 200 and had a physio look into his bother after being thumped on the helmet with a Southee bouncer. Malik would stick around after ‘Prof’ Hafeez had been sent back via a stunning catch and Rizwan had departed. It’s on days when Babar Azam and Fakhar Zaman push off early that Malik’s final touches are required. He would pick on the spinner Santner after trialling his big hits against Ish Sodhi earlier, to settle nerves nearing the end. He’s been at it for 22 long years now, and knows all there is to know about finishing a chase, though his career looks nowhere close to the finish, at 39.