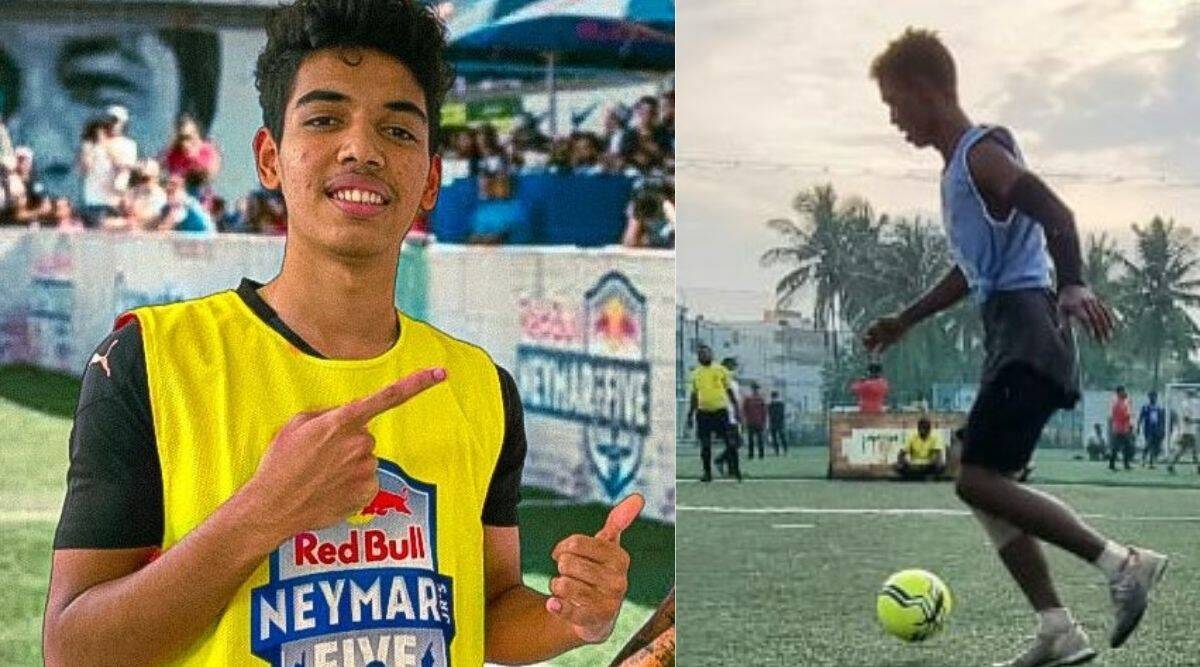 Two street or freestyle football crazy boys from Kannur and Bengaluru win a place in the Brazilian footballer's Global Five 2021 team organised by an energy drink company and will be joined by five others selected from worldwide. Soon, Shahzad Rafi, 17, a football crazy boy hailing from Pazhayangadi in Kannur, will realise his long cherished wish of meeting football icon Neymar Jr. So will Abhinash Shanmugham,23, of Bengaluru who too made the cut with his ‘street football’ videos which were accepted by the Brazilian led jury.

Unlike Abhinash who plays for Legendary Club in Bengaluru’s ‘C’ Division, Shahzad has never played even the school football team but loves to watch football, particularly his hero Cristiano Ronaldo, on TV.

In 2020 too, Shahzad applied for the Neymar Jr’s Global Five team but that ended in disappointment. This time, three of his videos, all of one minute 45 seconds duration caught the attention of the jury comprising the Brazilian striker. The videos which include dribbling skills, passing and scoring tricks on streets, astro field and football grounds singularly, one on one and with and against teams, were posted on Instagram.

Shahzad and Abhinash have been shortlisted from over a million and made the cut from final 33,000 videos from all over the world.

The Neymar Jr’s Global Five 2021 team, organised by the energy drink giants Red Bull, has five others including Jamy Schallenbergh of Belgium, Leon Gillies Mannes of Norway, Simon Gustova of Brazil, Stanley Godian of Nigerian and Giorgi Monalti of Italy.

The team will meet for Doha World Finals later this year and will take on other teams from all over the world in a 10 minute five-a-side tournament format. Neymar himself is expected to be personally present for the World Finals.

Sabreesh S, a former footballer but now a futsal player, also from Bengaluru who made it in 2020, was the first from India. The budding actor’s plan to meet Neymar last year was shelved due to the Covid-19 pandemic, travel restrictions as well as due to the Brazilian being occupied with both his club PSG as well as Brazil national team’s engagements. But the 24-year-old who mentored Abhinash too has been invited this time.

“I’m thrilled and eagerly waiting to meet Neymar who is an icon. Although I’m a Ronaldo fan, it doesn’t matter,” said Shahzad who became an avid street footballer or a freestyle footballer as it is more popularly known, after a chance meeting with Arnaud ‘Séan’ Garnier in Kuwait in 2019. Garnier, a French freestyle footballer, was the first world champion at the Red Bull Street Style World Finals in São Paulo, Brazil in 2019 and is immensely popular around the world.

Since the Kerala boy competed for the first time last year while he was studying at Indian Community School in Salmiya, Kuwait and most of his videos were taken from there, he will be representing the Gulf country.

For Abhinash, it is like a dream come true to meet Neymar and he told indianexpress.com from Bengaluru, “I’m really thankful to Redbull for recognising players from the street. I’ll work hard to make India proud in the World Finals in Qatar.”


Sabareesh, 24, who failed to make it to the Karnataka state football team a couple of years back, beat inner demons like depression to get where he is right now. “I fell sick just before a selection and for two years I never went out of my house. I took online coaching and one of the major sports channels reposted my coaching classes and it changed my life forever,’’ said Sabareesh.