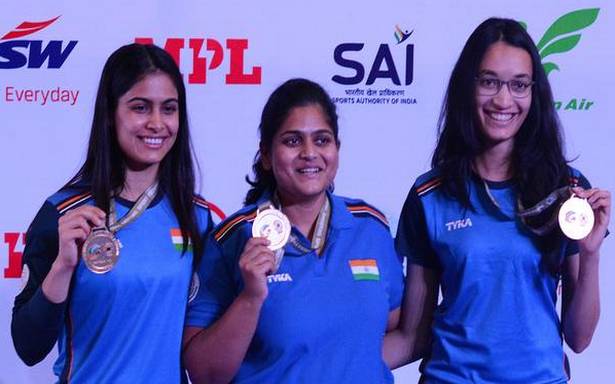 World Championship silver medallist Anjum Moudgil has been deprived of a chance to compete in air rifle in the Tokyo Olympics, and the honour has been bestowed on World No. 1 Elavenil Valarivan.

In the selection committee meeting held on Sunday, the National Rifle Association of India (NRAI) opted to swap the quota won by Chinki Yadav in women’s 25-metre sports pistol with Anjum in order to facilitate the latter to compete in the rifle 3-position event along with Tejaswini Sawant.

Chinki had won the gold in the recent World Cup.

Anjum will also get to shoot in the mixed air rifle event along with Deepak Kumar.

Elavenil and Divyansh Singh Panwar have been named as the first team for mixed air rifle.

Olympian Apurvi Chandela who has had a phenomenal year in 2019 winning two World Cup gold medals, with world record to boot, will shoot only air rifle and not the mixed event.

“The National selection committee’s main focus was to select the strongest squad for the Games and to ensure that the most consistent performers in each event, during the Olympic cycle, do not miss out.

“We are confident that these shooters will deliver,” said the NRAI president Raninder Singh in a statement.

The reserves have been announced for each event, considering the uncertain global scenario with the pandemic.

The reserves will get to train on par with the Olympic bound athletes in the run up to the Games.

The team (along with reserves):