Pakistan was reduced to 33/4 at stumps on a pitch devoid of grass as 14 wickets fell on an eventful opening day of the two-Test series. 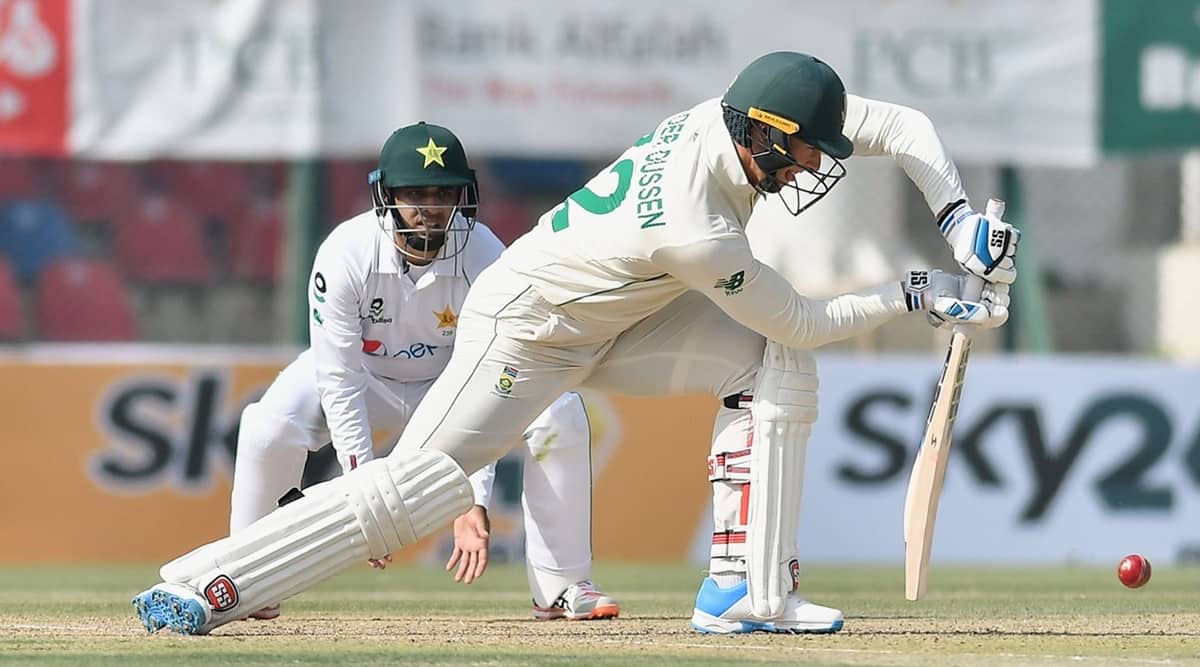 South Africa came back roaring after being skittled out for 220 on a bowler-dominated first day Tuesday of its first Test in Pakistan in more than 13 years.

Pakistan was reduced to 33-4 at stumps on a pitch devoid of grass as 14 wickets fell on an eventful opening day of the two-Test series.

Left-arm spinner Keshav Maharaj also had captain Babar Azam trapped leg before wicket for 7 off his third delivery, and Andrich Nortje knocked back the stumps of nightwatchman Shaheen Afridi for a duck.

At stumps, Azhar Ali and Fawad Alam were both unbeaten on 5.

Earlier, leg-spinner Yasir Shah grabbed 3-54 and left-arm spinner Nauman Ali 2-38 on debut to peg back South Africa after it won the toss and started confidently.

Opening batsman Dean Elgar top-scored with 58 off 106 balls with nine fours, and No. 9 batsman Rabada remained unbeaten on 21 as South Africa, 94-2 at lunch, lost its last eight wickets for 112 runs.

Faf du Plessis and Elgar were using their feet well against the spinners by lunch but Shah brought Pakistan back when he had du Plessis caught behind on 23 in his second over after the break. Du Plessis should have been out on 14 immediately after lunch but Abid couldn’t hold on to a sharp catch at forward short leg.

Nauman got into the act in his seventh and eighth overs, mainly because of the Proteas’ wrong shot selection. Captain Quinton de Kock, in his 50th Test, tried a reckless pull on 15 and was caught at midwicket, then Elgar tried a loose drive and edged into the slips after nearly three hours at 136-5.

Temba Bavuma added 43 runs with George Linde, but just before tea the diminutive Bavuma couldn’t beat a strong throw from Hasan Ali while going for a second run. Bavuma was out for 17.

Linde successfully overturned a lbw decision against him off Shah on 14 before holing out in the deep, which gave Hasan Ali his first wicket in his return to Test cricket after two years.

In the last session, Shah picked up two quick wickets but Rabada was missed twice, one of them a drop.

Both teams opted to go with three seamers and two spinners. South Africa, playing its first Test in Pakistan since 2007, included two left-arm spinners — Keshav Maharaj and Linde — and left out Shams Tabraiz as a third spinner after he had a back spasm just before the toss.

Pakistan umpire Aleem Dar, who has officiated on-field in a record 391 internationals, was supervising his first Test in Pakistan since his debut in 2000. Dar’s appointment was allowed because of travel restrictions in the pandemic.