The overhaul of South Africa’s coaching structure has given the team a major boost as they get ready to take on England in a four-Test series which begins on Thursday, captain Faf du Plessis said.

Former Test captain Graeme Smith was appointed director of cricket, Mark Boucher coach and Jacques Kallis as batting consultant in the weeks leading up to the series after the side lost their last five Tests.

“The last six months has felt like a lot of weight on my shoulders because I could see so many things happening off the field that weren’t right,” Du Plessis told reporters on Tuesday.

“That’s never an excuse for the cricket that we are playing but for me now it has been a breath of fresh air to have these guys back.

“Now you sit and ponder, ‘why have these guys not been here for the last 10 years?’ It’s so important to have people like that in an international dressing room and if you look around in international cricket, (other) teams have got that.

“I use the Australian cricket team as an example. When we played against them, they had (Justin) Langer, (Ricky) Ponting, (Steve) Waugh. Then you sit in our dressing room and go, ‘we need that, we want that’.

But even with experienced heads now to guide them, South Africa have modest ambitions in the short term, Du Plessis said.

“We are at an infant stage as a test team and the plan is to get back to No. 1 but that will take some time.

“We do need to mature, we have got a year and a half of the world Test championship. The plan is get out there and play a little bit better every time we go out.”

Losing at home to Sri Lanka this year and then being trounced in India had knocked South Africa’s confidence.

“We definitely need to start well, there’s no doubt about it. We have been training very well and all the things that have been happening off the field have been good,” Du Plessis added.

“But we need to make sure we put our peg in the ground for this series and almost get the belief back through performances.”

Anderson back to join elite club on 150 Test caps 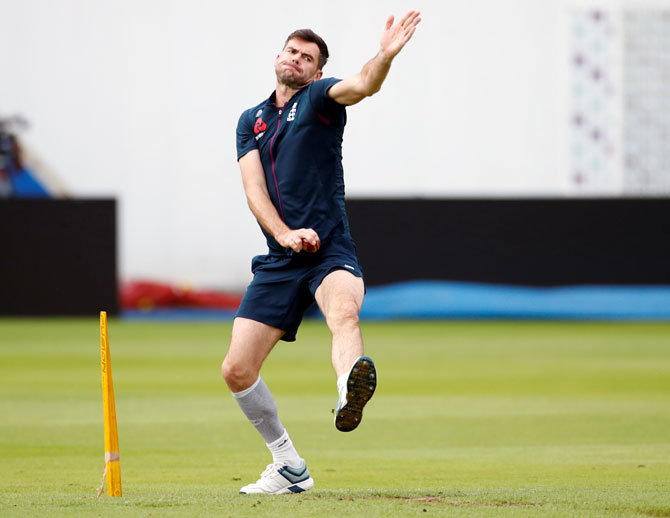 James Anderson’s return from injury could not be more timely for England, who are still unsure about the make-up of their bowling attack as they head into the first Test against South Africa.

But while Jofra Archer and Stuart Broad are still not sure of playing in the match, which starts on Boxing Day, after being laid low with flu, Anderson will be back on the frontline for what will be his 150th Test.

England are expected to field a five-man seam attack, foregoing spin, if all their pacemen are fully fit. However, that situation may need to be reassessed based on the availability of Ben Stokes.

The all-rounder’s father was admitted to hospital in Johannesburg his condition was described as being “critical” on Tuesday in a statement from the England and Wales Cricket Board.

The 37-year-old Anderson will be the ninth cricketer to reach the 150-Test milestone — joining the likes of Sachin Tendulkar, Steve Waugh and Jacques Kallis — when he makes his return to the England attack for the first time since limping off with a calf injury at the start of the Ashes in August.

“He’s looking as good as I have ever seen him,” said captain Joe Root.

Anderson had arrived in the country ahead of the majority of the England squad to attend a fast bowlers’ camp, underlining his desire to get back into the team.

“It feels like a long time since I have played a competitive game so to get some overs … was very pleasing,” he told reporters.

“There was a bit of rust but that’s to be expected having not played for four or five months. I am just happy to be back out there.”

Anderson was only 20 when he made his debut, taking five wickets against Zimbabwe at Lord’s in 2003, and last month said he wanted to continue through to the next Ashes series, which will start at the end of 2021 in Australia.

“I still want to do it, that’s part of the reason I worked so hard to get back,” added England’s record wicket taker with 575 Test scalps.

“It’s something I love and I still feel I have got something to offer, so that hunger and desire to get back is still very much there.”