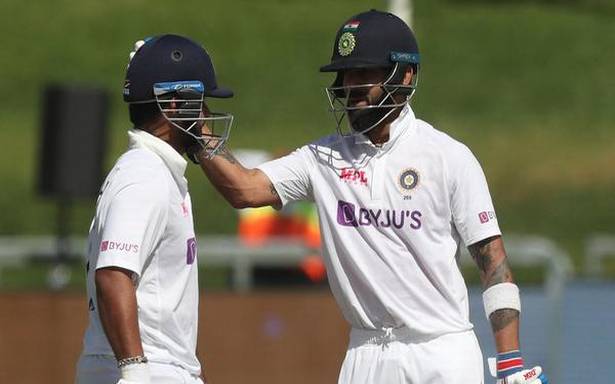 Counter-attacks with an unbeaten hundred after the tourists were rocked early; SA 101 for two at stumps chasing 212

Controlling Rishabh Pant is akin to reining in a wild horse. He can streak to the finish line but also so easily race off the track.

At the Newlands, here, on Thursday, Pant was able to balance his aggression with the need to stay at the wicket after the Proteas dented India early on day three.

The chunky left-hander’s unbeaten 100 at the Newlands on Thursday was a classic. The pacemen were swatted away with the sort of arrogance that only comes to the gifted.

And after India, dismissed for 198, set South Africa a target of 212, the host lost Aiden Markram, edging an away-going delivery from Mohammed Shami.

And skipper Dean Elgar, who worked the ball around craftily, departed in the closing moments, caught brilliantly down the leg-side by ‘keeper Pant off Jasprit Bumrah for 30.

Keegan Petersen, driving fluently off either foot, and reverse sweeping and cutting a toiling R. Ashwin for boundaries, was at the crease on an unbeaten 48.

At stumps on day three of the third Freedom Test, the Proteas were 101 for two.

South Africa is on course. India has to strike early on the fourth morning to have any chance.

Earlier Pant held centre-stage. Considering the conditions, the quality of the attack, and the situation he walked in, his hundred has to be among the greatest by an Indian batter on foreign soil.

And then after his skipper left to an ordinary stroke, the pocket powerhouse put up resistance, landing some punishing blows.

His presence was high on entertainment. The bat flew out his hands when he opened his shoulders with only the tail for support. And he attempted to essay the falling shots in the manner of a Rohan Kanhai.

Pant is a phenomenal talent. The southpaw picks the length early, gets into good positions and has loads of time to play his shots or pick his spots. And he has a pretty solid defence, when he applies his mind.

The Protea seamers were on target in the morning. Left-armer Marco Jansen snared Cheteshwar Pujara with a lifting delivery, an airborne Petersen holding a stunner at leg-slip.

Rabada’s delivery of bounce and away movement kissed Ajinkya Rahane’s gloves and flew high to a leaping ‘keeper Kyle Verreynne, who deflected the ball to an alert Elgar at first slip.

When Ngidi strayed in line, Pant essayed the flick. Duanne Olivier pitched it up and the wicket-keeper batter, stepping out, unleashed a rasping off-drive.

Creditably, Pant got himself on top of the bounce when he square-cut Jansen.

Left-arm spinner Keshav Maharaj flighted and Pant jumped out for a six over straightish long-on. A brutal strike.

After lunch, Pant sashayed down and eased Maharaj for a straight six. When the left-arm spinner landed a touch short, he travelled deep into his crease and executed the cut. This was good batting.

Earlier, Kohli glanced Lungi Ngidi delicately. Against a right-left combination, it wasn’t easy for the Protea seamers to bowl a consistent line.

Eventually, against the run of play, Kohli departed, taken out by Ngidi.

R. Ashwin did not last long, driving at a fuller ball from Ngidi. Ngidi bowled a spell of controlled hostility, taking the ball away and denying runs.

Pant was defiant but the Indian tail did not wag. In the Indian scoreboard, there was Pant’s 100, Kohli’s 29 and then there was nothing.

Scoreboard on the second day of the third Test between India and South Africa on Thursday.

South Africa 1st Innings: 210 all out