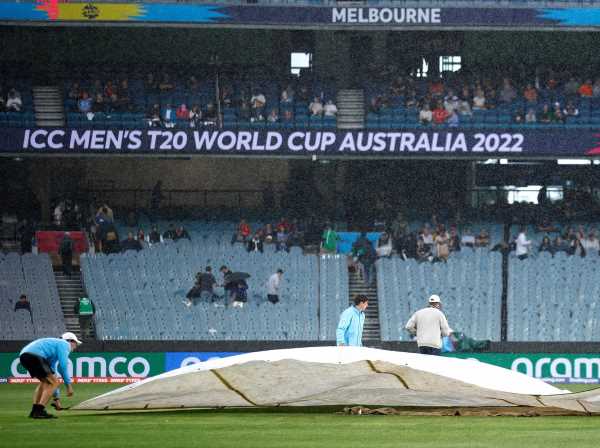 The T20 World Cup clash between champions Australia and England was abandoned without a ball bowled due to rain on Friday, leaving both teams’ semi-finals hopes hanging in the balance and fans disappointed at the Melbourne Cricket Ground.

With the Ireland-Afghanistan match also washed out at the venue earlier on Friday, England emerged from a miserable day at second in Group 1 among a logjam of four teams on three points.

It was a cruel day for bottom-placed Afghanistan, who already had a Super 12 match against New Zealand washed out at the MCG on Wednesday.

It was not lost on Afghanistan Coach Jonathan Trott that the roofed Docklands stadium across town might have been considered an alternative to the MCG as it often hosts T20 games in the domestic Big Bash League.

‘So we could have had lots of cricket,’ said the former England batsman. ‘But this is the way it is. It’s what makes tournaments unpredictable.’

Trott’s former team-mate and former England captain Michael Vaughan was clearly miffed by the arrangements at the MCG.

‘Rainy season in Australia .. Stadium in Melbourne with roof on… !!!!! Wouldn’t it have been sensible to use it ???’, Vaughan tweeted.

He drew a comparison with cricket grounds in Sri Lanka where he said the arrangements were much better even in stormy conditions.

‘Can I also ask why in Sri Lanka where they get huge thunder storms they cover all the ground & get play back on quickly?’ Vaughan asked. ‘Why hasn’t the MCG been totally covered for the last 2 days?????’