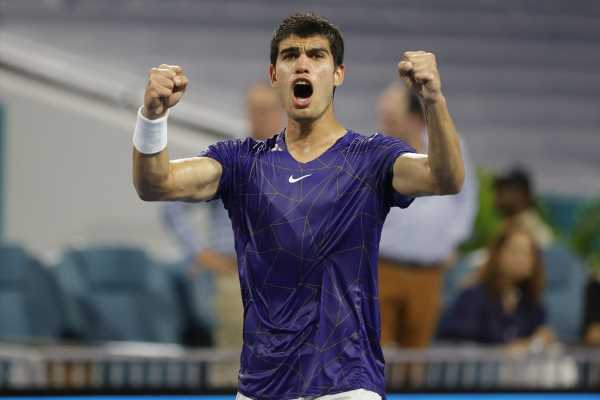 Spanish teenager Carlos Alcaraz continued his sensational play on Friday to beat defending champion Hubert Hurkacz 7-6(5), 7-6(2) and set up a Miami Open final against Casper Ruud, who ended the dream run of Francisco Cerundolo with a 6-4, 6-1 win earlier.

For the second night Alcaraz electrified the fans at Hard Rock Stadium with his feisty and fearless play and the 18-year-old will now look to become the tournament’s youngest ever champion on Sunday against world number eight Ruud.

“I will try to play like it’s the first round to mask the nerves,” said Alcaraz, who beat Ruud in straight sets in their only previous meeting in Marbella, Spain, last year.

“I think I’m going to enjoy it and it will be a great final.”

In the first set, Alcaraz erased a break point while trailing 3-4 with one of his trademark drop shots and later blasted an exquisite backhand passing shot to send the first set to a tiebreak.

In the breaker, Alcaraz rallied from a 5-3 deficit and won it when Hurkacz’s volley found the net, leading the hard-hitting Pole to the throw his racket to the court in frustration.

Alcaraz saved two break-points at 5-5 in the second set with help from a flurry of unforced errors by Hurkacz and in the second breaker, delivered yet another perfectly executed drop shot to set up match point.

He sealed the win when Hurkacz’s stab volley went into the net to the delight of the crowd on a hot and humid night under the lights in Florida. 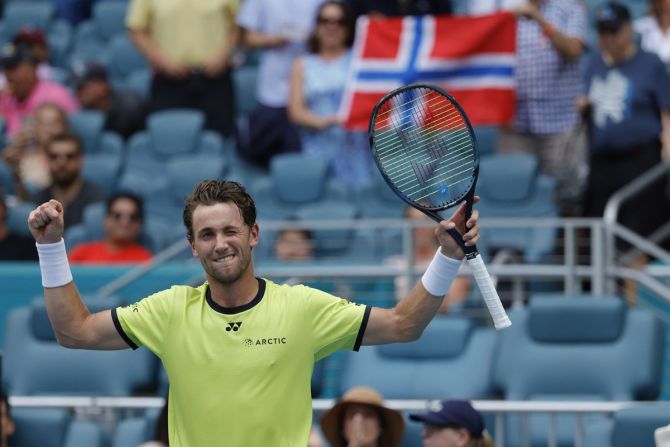 Alcaraz will face Ruud in the final after the Norwegian beat Cerundolo in their semi-final during the day.

Ruud converted a late break point to capture the opening set after nerves appeared to come into play for world number 103 Cerundolo, who was featuring in his first Masters 1000 tournament main draw.

Ruud, who like the Argentine is 23, fended off four break points early in the second set and broke Cerundolo with a drop shot for a 3-1 lead he would not relinquish.

Ruud thumped his sixth ace on match point to reach his first final at a Masters 1000 event.

“It was quite a tough match even though the scoreline said two straight sets,” said Ruud, who was known as a clay court specialist before excelling on hard courts this year.

“It was a physical match. The conditions here were very, very humid today. I was lucky I was able to pull through and didn’t need to play a third set.”

Despite the loss, the tournament was a breakthrough for Cerundolo, who is projected to rise to world number 51 when new rankings are released next week.