Australian maverick Nick Kyrgios knocked out fourth seed Stefanos Tsitsipas in a wild and wonderful Wimbledon third-round slugfest that threatened to spiral out of control on Saturday.

The 27-year-old Kyrgios produced sublime tennis to earn a 6-7(2), 6-4, 6-3, 7-6(7) victory but the match will be remembered chiefly as one of the most bad-tempered seen at Wimbledon since the days of American bad boy John McEnroe.

The eagerly-awaited Court One clash was the hottest ticket in town, even with Rafa Nadal playing over on Centre Court.

It did not disappoint either, with scintillating tennis producing 118 clean winners and mayhem as both players lost their heads and received warnings.

With the lights on and a deafening atmosphere it was the unseeded Kyrgios who emerged from the chaos with one of his finest Grand Slam victories, edging a nerve-jangling fourth set tiebreak after saving a set point.

Kyrgios claimed victory with a drop shot and he will enter the last 16 for the fourth time, the first since 2016, with serious title aspirations.

Next in his sights is unseeded American Brandon Nakashima. 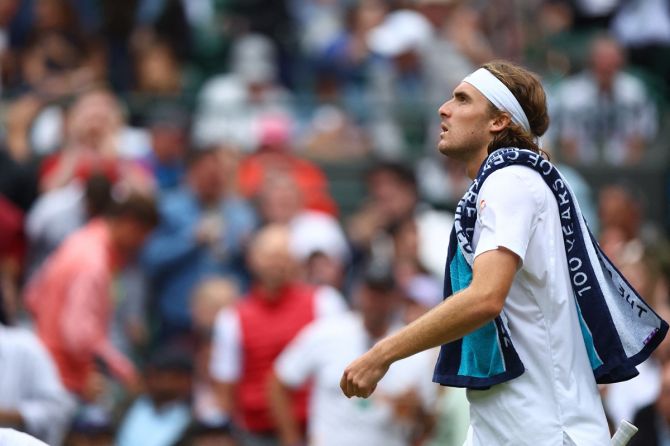 For most of a high-octane first set it was the quality of tennis from both players that held sway.

Kyrgios was his usual chuntering self but lost his temper with umpire Damien Dumusois after an overruled line call at 5-5 in the first set as he threatened a service break.

Tsitsipas remained focused to win the tiebreak and had a huge chance to seize control at 4-4 in the second set when Kyrgios let slip a 40-0 lead with two careless drop shots, but saved a break point with a second-serve ace.

The fireworks really began in the next game.

First Kyrgios was warned for an audible obscenity after being reported by a line judge, then he responded to break the Tsitsipas serve and steal the second set after the Greek failed to put away a smash with the court gaping.

Tsitsipas snapped, whacking a ball that narrowly missed the head of a fan and earning a warning.

Kyrgios ranted that Tsitsipas should have been defaulted, called the umpire “a disgrace” and demanded to talk to a supervisor.

“Give me all the supervisors. I’m not playing until we get to the bottom of it,” an irate Kyrgios said while Tsitsipas went off for a toilet break. On his return, the Greek booed as he became the unwitting villain in the Kyrgios pantomime.

Rattled, Tsitsipas dropped serve early in the third set, then received a point penalty for launching a wild return off a Kyrgios underarm serve — the ball thudding into the scoreboard.

With his blood boiling, Tsitsipas drilled a close-range smash straight at Kyrgios in the next game, missing him and the court as the atmosphere turned toxic. He then had another go, this time clubbing a backhand straight at Kyrgios.

Serving sensationally, Kyrgios wrapped up the third set with a sublime reflex volley.

Kyrgios, who was fined $10,000 for spitting towards a fan after his first-round win, had three break points in the first game of the fourth but, as if there was not already enough drama, slipped awkwardly and grimaced as he clutched his hip.

Tsitsipas wriggled out of trouble and with Kyrgios showing no ill effects the temperature lowered slightly.

Kyrgios curled an audacious forehand to earn break points at 3-3 but Tsitsipas held firm and roared in defiance.

With gloom descending, Tsitsipas had 0-40 in the next game but Kyrgios served his way out of trouble to level before a short break for the roof to be closed and lights switched on — allowing the crowd a welcome chance to draw breath.

On the resumption, Kyrgios saved one set point with a searing backhand winner and another in the tiebreak with an audacious half-volley drop shot.

Another drop shot got the job done on his second match point and Kyrgios celebrated wildly, before a brief handshake at the net after three hours and 17 minutes of sporting theatre. 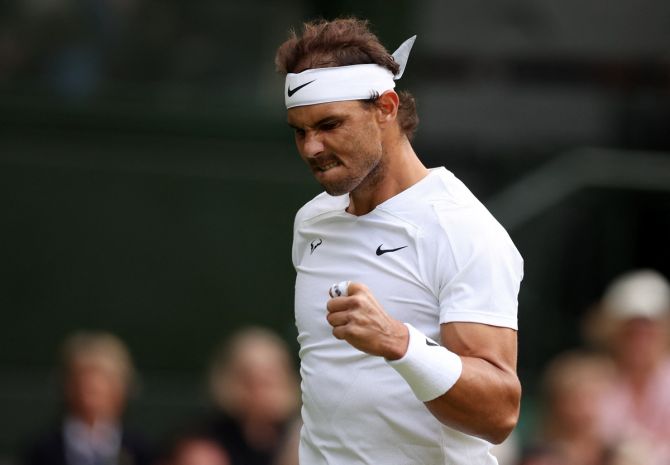 An irritated Rafael Nadal’s pursuit of a rare calendar Grand Slam gathered momentum on Saturday as he took it upon himself to reprimand Lorenzo Sonego before condemning the Italian to a 6-1, 6-2, 6-4 defeat in the Wimbledon third round.

The second seed had dropped a set in each of his previous two matches at the grasscourt major but on day six he appeared to be on a mission to get the match done and dusted before darkness set in.

But when Sonego convinced officials to close the roof so that the floodlights could be turned on with the second seed leading 4-2 in the third set, Nadal did not appear happy with the decision as it meant his victory charge would be held up by at least 10 minutes.

Upon resumption, the Italian riled the Spaniard by roaring in the middle of a rally after hitting a spectacular shot.

Nadal ended up dropping his serve for the first time in the match and, like a stern headmaster, he beckoned Sonego to the net and gave him an earful about the etiquette of tennis.

That exchange only served to fire up Nadal further and he won the next two games to reach Wimbledon’s round of 16 for the 10th time.