Send in your answers to [email protected] Also do mention your name & city. 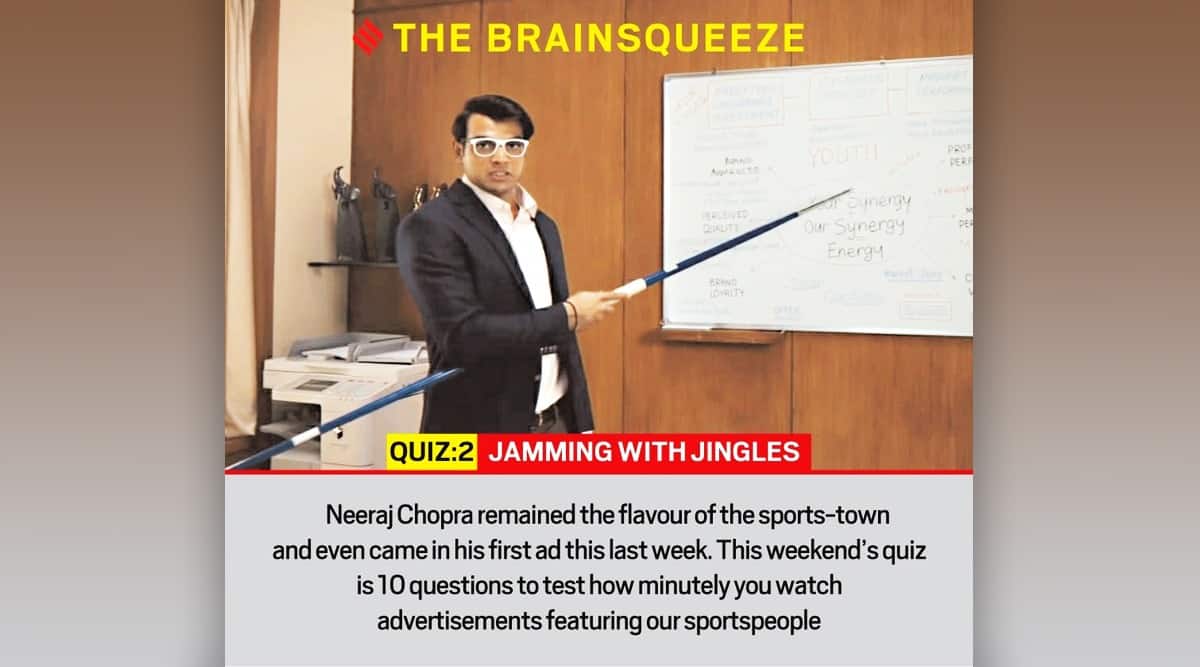 Neeraj Chopra remained the flavour of the sports-town and even came in his first ad this last week. This weekend’s quiz is 10 questions to test how minutely you watch advertisements featuring our sportspeople.

1. So, Neeraj Chopra unfurled his acting chops playing a cashier, a TV reporter, a brand manager and a filmmaker in a recent ad. Which Indian sports star swapped costumes one after another to play varied characters like a goody-good school girl, a Buddhist monk and even Dracula in a 90s ad?

2. A nutritional health drink for 2-5 year olds came in an iconic orange box with a lego piece lid. The sports star roped in as the role model, also played the kid preparing for a school day and following in her hero’s footsteps. She grinned into the camera playing with a yellow hand-puppet. Who was the athlete?

3. “But you can’t play chess for a living unless you are Viswanathan Anand”: the clueless man with a smirk, told Viswanathan Anand in an ad for a computer processor. Where does this scene play out?

4. Which country is common to Mr India’s Sridevi song and Master Blaster India’s soft drink ad he did with Shane Warne & Carl Hooper?

5. The chocolate drink was the secret of their energy. But what workouts were Kapil Dev and Sachin Tendulkar seen doing in this ad? Hurdles, pushups, Xxxxxxxx (8 letters), crunches, bench press. (Guess the missing one)

6. Rahul Dravid’s shoe laces were tied to each other by a bratty nephew and he slid down a stairway railing as the two scrambled to reach what first after waking up in an ad?

7. Which debuting Olympic sport from Tokyo featured in a Yuvraj Singh ad for XBox?

8. The tagline went ‘Reaches you fresher, reaches you faster’ as this famous sprinter ran through a lush green tea estate. Who’s the athlete?

9. Viv Richards, Allan Border and Ravi Shastri headlined the ‘stuff’ that fine woolen suits were made of in 1980s for the best in cricket. The Indian brand chimed to a catchy jingle too. But what was the 7-letter word beneath the trademark red/white logo, which is also another name for a high-quality type of wool yarn and the place of origin of this fabric in Norfolk County? It came alongside the words “woolen, polyrich suitings”.

10. Yet another luxe clothing brand put Leander Paes-Mahesh Bhupathi into sharp bespoke suits, just before the seams came apart heart-breakingly on the tennis champions’ charmed partnership. Then the celebrated suit makers signed on an entire visiting team, considered the world’s best, but had to pull out the advertisement as a massive scandal freshly broke around the team.
Which team are we talking about?

Send your answers to [email protected] alongwith your name & city.

Wrong spellings will be frowned upon.

Send in answers by Sunday.