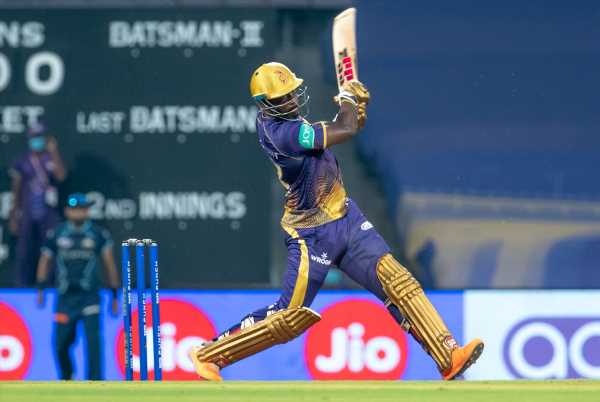 Andre Russell produced a superb showing with ball and bat, but it still wasn’t enough to prevent the Kolkata Knight Riders from going down by eight runs against the Gujarat Titans in the IPL 2022 match at the D Y Patil stadium in Navi Mumbai on Saturday, April 23, 2022.

Russell bowled a sensational last over, picking up four wickets to limit the Gujarat Titans to 156/9 after GT had elected to bat.

Calledto bowl the 20th over, Russell struck with the wicket of Abhinav Manohar, who was caught at deep midwicket for 2 before Lockie Ferguson perished in the same fashion off the very next delivery.

Alzarri Joseph denied his compatriot the hat-trick, but Russell was not done yet. He finished off the innings in style, with wickets of Rahul Tewatia and Yash Dayal off the last two balls of the over.

With the bat too, Russell was KKR’s best performer. He stroked a quickfire 48 from 25 balls to keep his team’s hopes alive in the last few overs in a tight run chase.

Russell (4) got a lifeline when he was caught at fine leg off left-arm pacer Dayal, but the pacer overstepped to concede a no-ball. Russell made it worse for the fast bowler with sixes off the last two balls of the over.

With the other KKR batters struggling to get going, Russell single-handedly took on the Gujarat bowlers. Ferguson and Mohammed Shami were hit for a six each and so was Dayal, as KKR somehow stayed in the hunt.

With 18 needed from the final over, Russell lofted Joseph for a six over long-on and he looked all set to steer his team home. But he fell off the next delivery, as he miscued the pull shot and Ferguson took a superb catch at fine leg to end a stunning knock from the West Indian.

If only the other batters had given Russell enough support, things would have turned out differently for KKR, who slumped to their fourth loss in a row.