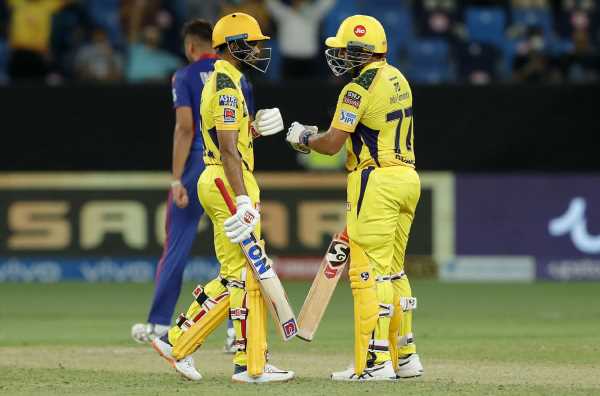 Ruturaj Gaikwad has emerged one of the best batting talents in the country with his consistent showing for the Chennai Super Kings in IPL 2021, while Robin Uthappa repaid the team’s faith with a cracking knock under pressure against the Delhi Capitals in the IPL Qualifier 1 match on Sunday, October 10, 2021.

Chasing a stiff 173 for victory, CSK were rocked early when Anrich Nortje dismissed Faf du Plessis in the first over, but Uthappa and Gaikwad rallied them with a stunning counter-attack in the Powerplay.

Uthappa made his intent clear when he drove Nortje through the covers for a four to get off the mark in confident fashion off the first ball he faced.

Gaikwad showed no respect towards Delhi’s pace sensation Kagiso Rabada. He chipped down the track to Rabada’s first ball and smashed him for a big six back over his head, in the fourth over, before Uthappa flicked Rabada for a four past short fine leg.

Uthappa, who was retained ahead of Suresh Raina, continued in the same vein as he took fast bowler Avesh Khan to the cleaners in the sixth over. He hit Avesh’s full delivery for a six over midwicket and swung the next over the same region for a four.

The veteran batter then lofted Avesh back over his head for another six followed by a boundary over mid-off, to score 20 runs from the over. <?p>

Although CSK’s scoring rate dipped after the Powerplay, the duo kept the scoreboard ticking with ones and twos and never let the asking rate get out of hand.

Uthappa raced to his fifty from 35 balls in the 10th over and Gaikwad looked in a rush to join him. The young right-hander lofted Axar Patel for a six over long-on, clearing the tall Rabada on the fence and slammed the next back over the bowler’s head for a four.

Uthappa showed his range against the experienced Ravichandran Ashwin, reverse sweeping the off-spinner over short third-man for a four before he launched the next ball straight down the ground for another boundary.

He finally perished after a splendid knock of 63 from 44 balls, caught at deep midwicket off Tom Curran. But he had laid the foundation for CSK in the company of Gaikwad, as they put on 110 runs for the second wicket from just 77 balls.

CSK suffered a mini collapse, losing three wickets in the space of eight balls, but Gaikwad stayed firm as he raced to his fifty from 37 balls.

The asking rate kept going up in the final overs, but Gaikwad kept his composure, scoring boundaries at regular intervals. He hit Nortje for a couple of boundaries in the 18th over but perished to Avesh in the penultimate over, caught at deep midwicket by Axar after a superb knock of 70 from 50 balls.

Captain Mahendra Singh Dhoni finished off things in style with a quickfire 18 from six balls as Chennai stormed into their ninth IPL final.