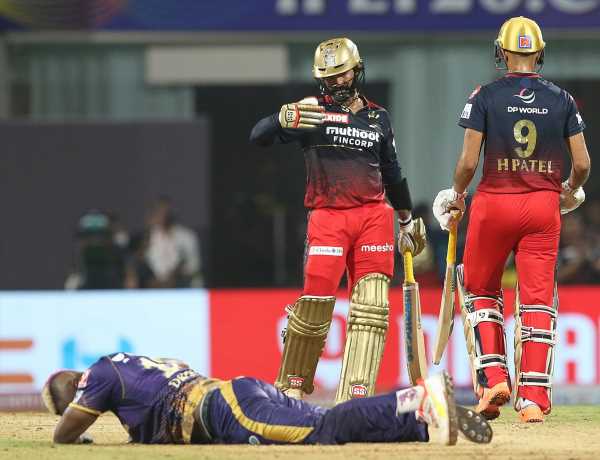 The stage was set in the penultimate over of the game with both Royal Challengers Bangalore and Kolkata Knight Riders in with a chance of winning the game.

A low-scoring cliff-hanger, the match went down to the last over with all 4 results in play.

Kolkata were looking for three wickets while RCB needed 17 to win off 12 balls.

The two batters at the crease were Dinesh Karthik and Harshal Patel, both of whom had arrived in the previous over and were expected to deliver under immense pressure.

What ensued in the second ball of the over was a batter’s nightmare — one of those bizarre moments in cricket where tangled communication while attempting a run results in both batters ending up at the same end of the pitch.

With a disoriented DK looking on in shock towards Harshal, the onus was on KKR’s Umesh Yadav, the fielder in the outfield, to keep his cool and facilitate a straight forward run-out and bring his team within touching distance of victory.

Umesh’s hurried wild throw at the batsman’s end was a complete miss, resulting in DK getting a life.

Also, had Venkatesh Iyer, the bowler, stayed at his end, the throw from the fielder receiving Umesh’s wild throw could have still ensured a run out at the bowler’s end, but with Iyer inexplicably wandering off to mid on, there was no one to receive the throw at the stumps.

Harshal then hit two unorthodox boundaries to make it 9 off the over. DK needed only two deliveries off Andre Russell’s final over to close out the tie.

With the win, RCB now has its first points on the board and will be keen to carry on the momentum.