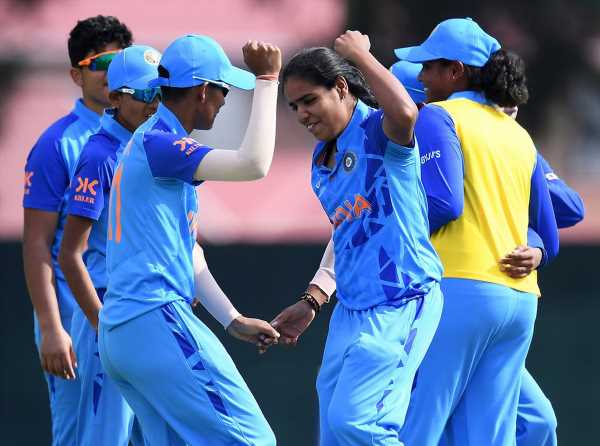 India stormed into the Super Six stage as they overpowered Scotland by 85 runs in their final group fixture of the ICC Under-19 Women’s T20 World Cup in Benoni on Wednesday.

India signalled their intent by choosing to bat when they won the toss, and even the loss of captain, Shafali Verma and Sonia Mehdiya relatively early, didn’t derail their plans. G Trisha’s sparkling 57 off 51 balls was studded with six boundaries. She received good support from the reliable Richa Ghosh, as they added 70 for the third wicket.

Ghosh’s experience weighed in with 33 from 35 balls, including three boundaries. The pair fell within three balls of each other, and it was left to Shweta Sehrawat to provide the fireworks to close out the innings. She hammered 31 not out from just 10 balls. The blitz included four fours and two maximums, powering India to 151 for four.

Katherine Fraser was the pick of the bowlers for Scotland, with two for 31.

Chasing 152 to win, Scotland started with Ailsa Lister (14 off 14 balls) and Darcey Carter (24 off 22 balls) adding 24 in the first four overs. Once they departed however, the wheels fell off for a Scottish side that has been on a steep learning curve in the past fortnight. Mannat Kashyap tore through the middle-order, snaring four for just 12 runs in her spell of four overs. Archana was just as destructive, with three for 14 in her allotted overs.

Such was their devastation, Scotland were bundled out for 66, losing their last six wickets for just 16 runs. Sonam Yadav applied the finishing touches with the ball, picking up two wickets in her seven deliveries.

India now move onto the Super Six stage, where they will be rightly acknowledged as one of the genuine contenders for the maiden U-19 Women’s T20 World Cup.

For Scotland, this marks the end of the road, but there were plenty of lessons taken on board, which several players will take into the senior women’s side going forward.