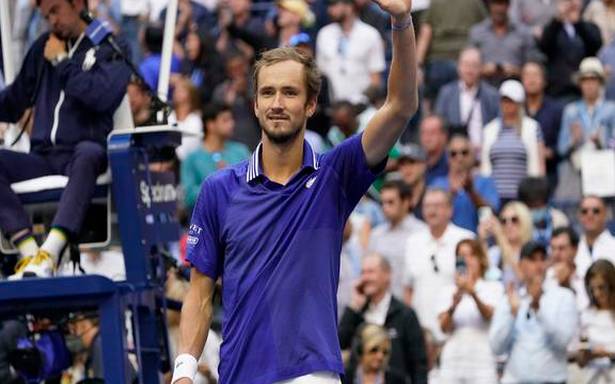 This is the third Grand Slam final for the second seeded Russian.

The 2019 runner-up looked rock-solid at the start, firing off seven aces and never facing a break point in the first set, where he had just five unforced errors and broke Auger-Aliassime’s serve in straight points in the seventh game.

Down a break in the next set, Medvedev looked like he might be in trouble but refused to give up as Auger-Aliassime twice failed to clinch on set point in the ninth game and Medvedev broke his serve.

A double fault from Auger-Aliassime in the 11th game – one of 10 across the entire match – helped Medvedev to another break before the Russian ran away with the momentum into the third set, where he dropped just one first-serve point.

The six foot, six inch Russian displayed excellent court coverage with an agility uncharacteristic for his tall frame, firing off 37 winners compared to 17 from Auger-Aliassime across the entire match, with 25 unforced errors.

“You never know where the match is going to go. Managed to save the set point… and the match turned around completely,” said Medvedev, after competing in his third straight U.S. Open semi-final.

“I don’t think I played my best today but I’m really happy to be in the final Sunday.”

It was the first Grand Slam semi-final for 21-year-old Auger-Aliassime, who reached the Wimbledon quarter-finals earlier this year and has been hailed among the sport’s brightest young stars.

The world number two continues his hunt for a maiden major title after losing to Novak Djokovic in the Australian Open final earlier this year.

After picking up his fourth Masters 1000 title in Toronto last month, he dropped just one set through six rounds at Flushing Meadows and is looking to lift the trophy for the first time after losing in five sets to Rafa Nadal two years ago.

“Last time was a crazy match,” said Medvedev. “If it’s going to be the same match on Sunday, I just hope I can win this time.”