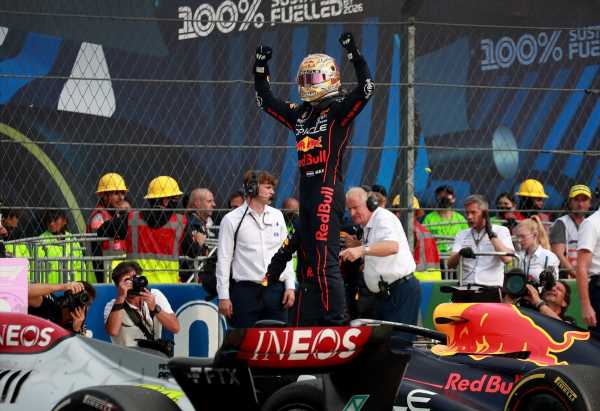 Red Bull’s double World champion Max Verstappen won the Mexico City Grand Prix on Sunday to set a Formula One record of 14 victories from a single season, as well as the most points scored.

The Dutch driver led from pole position at the Autodromo Hermanos Rodriguez, stopping on lap 26 of 71 to switch from soft to medium tyres and taking the chequered flag 15.186 seconds clear of Mercedes’s Lewis Hamilton.

“It’s been an incredible year so far, we are definitely enjoying it and we’ll try to go for more,” said Verstappen, who clinched his second title in Japan on Oct. 9 and had an untroubled afternoon.

Red Bull’s Sergio Perez finished third in front of his cheering home crowd after a race that was low on thrills and all about tyre strategy.

Verstappen’s win was the 25-year-old’s fourth in Mexico and the podium was the same as last year.

In Austin, Texas, last weekend he had pulled level with German champions Michael Schumacher (2004) and Sebastian Vettel (2013) on 13 wins in a season.

Verstappen also took his points tally to 416 — 136 more than Perez who moved up to second overall and three more than the previous record set by Hamilton in 2019.

It was also a ninth win in a row and 16th from 20 races for Red Bull, who wrapped up the constructors’ title in Texas with three rounds to spare, but Mercedes showed they were getting closer. “I was so close in that first stint but I think the Red Bull was clearly too fast today and ultimately, maybe they had the better tyre strategy,” said Hamilton, who felt he should have started on softs instead of mediums before switching to hards.

George Russell lost out at the start, lining up on the front row for Mercedes but dropping two places to fourth as Hamilton muscled past his team mate with Perez also seizing the opportunity to go third.

Both Mercedes drivers complained about the strategy but were assured from the pit wall that Red Bull’s medium tyres would lose performance — a hope that proved to be optimistic.

“That medium looks quick mate, they’re going to go to the end,” said Hamilton over the radio 10 laps from the end, accepting it was game over.

The race was already a four-driver battle after 20 of the 71 laps, with Ferrari’s Carlos Sainz and Charles Leclerc finishing fifth and sixth but far off the pace and the latter close to being lapped.

“This weekend we were just slow,” said Sainz, who finished 58 seconds behind Verstappen.

Daniel Ricciardo put on the show of the day, reeling off overtakes on the soft tyres and finishing seventh for McLaren despite a 10-second penalty for causing a collision with AlphaTauri’s Yuki Tsunoda.

His performance won the Australian, who is leaving McLaren at the end of the season with no other drive lined up, the vote for driver of the day by fans and that familiar smile was broader than ever.

Esteban Ocon was eighth for Renault-owned Alpine, after team mate Fernando Alonso retired with an engine failure, with McLaren’s Lando Norris ninth and Valtteri Bottas back in the points for Alfa Romeo in 10th.

“Unbelievable. What a season, what a season,” complained Alonso before he pulled off and parked up on lap 65, triggering a brief virtual safety car while the Alpine was pushed away by marshals.