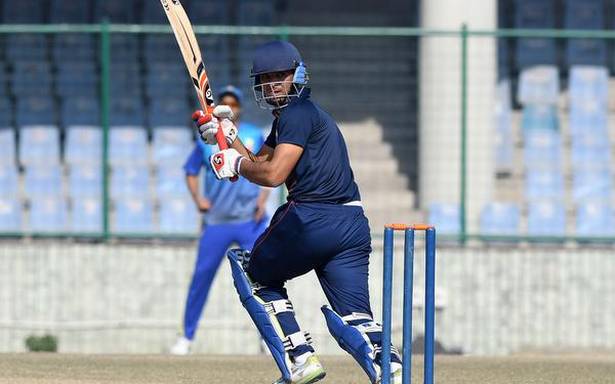 Pathania picks up three; Chauhan and and Paliwal punish a wayward attack

For Services to topple a strong Kerala, it needed a disciplined performance and luck to favour it. The toss evened the scales just slightly, and self-destruction by Kerala’s middle-order batters meant Services brushed aside its opponent with relative ease at the K. L. Saini Stadium here.

The seven-wicket win helped Services make it to the semifinals of the Vijay Hazare Trophy for the first time.

Fast bowler Diwesh Pathania (three for 19) and opening batter Ravi Chauhan (95, 90b, 13×4, 3×6) made decisive contributions with ball and bat, respectively, ensuring a thorough performance from a team devoid of superstars.

Inserted in, Kerala was put under pressure by the fast bowlers — especially Pathania — from the get go.

In his excellent first spell, Pathania got two wickets in two balls with deliveries that moved away slightly after pitching.

Later, Pathania came back to help wipe the tail in a hurry, but the real damage was done when the seamers weren’t bowling, after the patient and solid Rohan Kunnummal (85, 106b, 7×4, 2×6) had steadied the ship in the company of Vinoop Manoharan and Sachin Baby.

First, Sachin top edged while attempting a sweep off Pulkit Narang, the off-spinner and was caught out in the 31st over. Soon after, Sanju Samson, the captain, smashed a half-volley from Narang straight to the fielder at long-on to be dismissed for two. Then, the set Rohan got out, too, run out at the non-strikers’ end after a mix-up, in the 37th.

Services’ top order still had to see off the new ball and to safely negotiate Basil Thampi & Co. Wickets did fall, but once the fast bowlers were given a rest, opener Chauhan and Rajat Paliwal (65, 86b, 8×4) started to keep the scoreboard ticking.

By the 16th over, the tide had turned, Chauhan reaching his half-century with a slog-sweep for six.

That it wasn’t Kerala’s day was signified when Rohan, the top-scorer for his side, dropped a catch in the 27th over. Chauhan had slog-swept the ball to deep midwicket where Rohan, diving forward, couldn’t hold on.