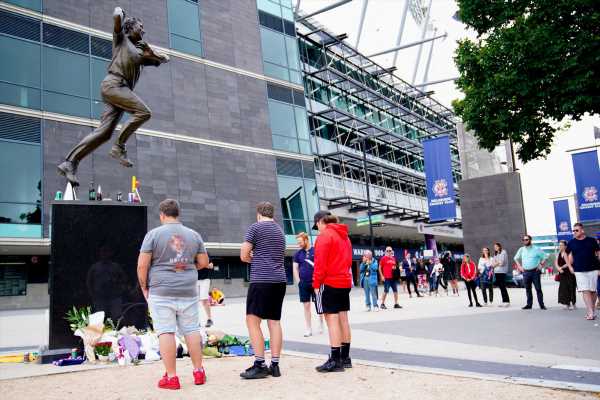 A state memorial service for cricketing great Shane Warne will be held at the Melbourne Cricket Ground on the evening of March 30, the Premier of his home state Victoria announced on Wednesday.

Warne died on Friday at the age of 52 while on holiday on the Thai island of Koh Samui. Local authorities said Warne died of a suspected heart attack and congenital disease.

His body remains in Bangkok awaiting a flight back to Melbourne, where he will be buried at a private family funeral ahead of the state service.

Victoria Premier Dan Andrews announced that the wider community would have the chance to mourn Australia’s most prolific wicket taker at the 100,000-seater stadium in late March.

“There’s nowhere in the world more appropriate to farewell Warnie than the ‘G,” Andrews tweeted.

“Victorians will be able to pay tribute to Shane and his contribution (to) our state, and his sport, at a memorial service at the MCG on the evening of March 30th. Info and tickets will be available soon.”

Tributes from across the world have continued to pour in for Warne since his death, with Australian Prime Minister Scott Morrison calling him “one of our nation’s greatest characters”.

Born and bred in Melbourne, Warne took his 700th Test wicket in front of a crowd of 89,155 at the MCG during the fourth Ashes Test against England on Boxing Day, 2006.

The Victoria government announced at the weekend that the Great Southern Stand at the stadium, where his most passionate fans would once gather, would soon be renamed the SK Warne stand in his honour.